Huge damage to the members of the Cooperativa Pescatori

We are still waiting to find out exactly what caused the destruction of the tonnarella, a historic fishing system dating from the 17th century, unique to the small town of Camogli in Liguria, in Northwest Italy, and for the last hundred years and more managed directly by the fishermen of nearby Punta Chiappa. So far we know nothing about the boat that entered the in-shore fishery on the night of April 25-26, destroying all the biodegradable coconut fiber nets typical of the tonnarella (so-called after the tonnara system, which is much larger). We don’t know who caused the irreparable damage and whether it was a mistake or not. The only thing we do know for certain is that that there will be no more fishing for this year, since it will be impossible to repair the nets in time for the April-September fishing season. Just as it will be impossible to avoid huge economic damage to the 30 members of the Cooperativa Pescatori di Camogli, the fishing cooperative that has been running the tonnarella since 1982, now protected as a Slow Food Presidium since 1982, and its 20 employees on land—not to mention to related activities.

‘We had only been fishing for a month. The real season would have been starting right now,’ explains cooperative director Mario Mortola. The tonnara net, two kilometers long and 40 meters deep, was completely destroyed. ‘It’s likely that a large boat entered the fishery by mistake as only a large engine powerful enough to drive large propellers could cause this amount of damage. The system had 15 anchors, each weighing 150 kilos, but they were all wrenched up from the seabed. Because of the rough sea, we were only able to reach the scene the following afternoon. And when we got there, there was nothing left. The tonnarella wasn’t there any more.’
Mortola and his partners got a team of scuba divers to check out the scene and they confirmed that the nets had been totally dragged off. The Genoa harbor office has been informed and it is Mortola’s hope that, using its instrumentation, it will be able to identify the boat that caused the damage. 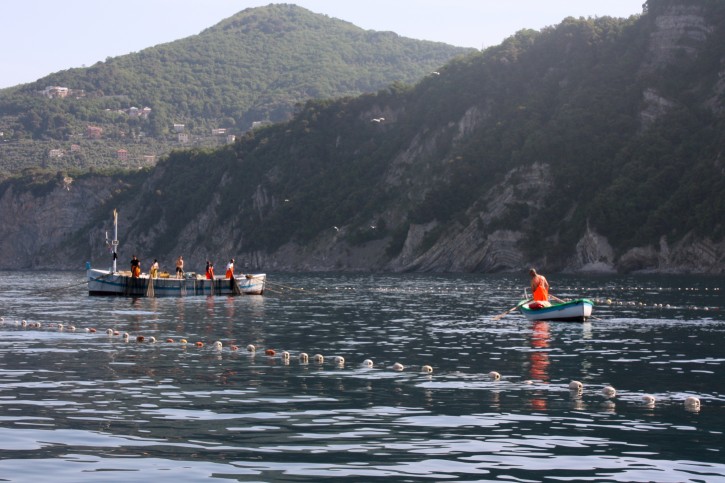 The loss is not only economic. The tonnarella of Camogli is a unique system in Liguria and, as one of the few such systems still adopted in Italy, represents a model that must be protected. It is also highly sustainable insofar as it involves trapping fish between boats so that the fishermen can see their catch and release live specimens that are unsellable or undersize, hence protected by the law. It is a method that obliges fishermen to long days of hard work as, unlike a tonnara, which is at sea for only a few weeks, the tonnarella is there for just six months. Workers are seasonal and the Cooperativa, in collaboration with another local association, organizes excursions to the tonnarella to demonstrate fishing activities to visitors, and to the Museo del Mare, or Museum of the Sea, housed in its original headquarters nearby.

‘We can rule out any more fishing for this year,’ says Mortola. ‘It would take two or three months alone just to get the nets ready again.’ In the past there have been minor cases of damage, always attributable to mistakes made by small boats. In 2010, for example, a yacht’s motor partly damaged the nets and in 2015 a boat shifted the buoys out of position. In those cases, however, thanks to a few thousand euros in insurance compensation, the nets were mended and fishing was resumed after only a few days of stoppage. But this time round nothing can be done. ‘In years of work I’ve never seen such serious damage,’ concludes Mortola. A €100,000 investment has gone up in smoke and the whole season has been jeopardized. ‘The fishers of Camogli naturally have all our solidarity,’ says Francesca Baldereschi, head of Slow Food’s Italian Presidia, ‘and we’ll continue to follow developments and do what we can to support the community.’

Nonetheless, Camogli’s tonnarella fishermen will be taking part in Slow Fish, where Slow Food will grant them a free space as a token of solidarity.