Bees are our primary farmers, and their disappearance signals bigger problems that we all need to be aware of. Slow Food Mexico has recently launched the #SalvaLaColmena (Save the Hive) campaign to spread awareness on the issue and inform us on how we can be a part of their campaign to help save the bees.

Even if we don’t realize it, the biodiversity of our crops and animals heavily depends upon the pollination done by bees. However, increasingly, bee populations have been vanishing. Massive die-outs of bee colonies were first reported in the 1990s and the situation has not slowed down since then. The main causes of bee deaths include the intensive use of pesticides in agricultural practices, proliferation of contagious parasites, deforestation of habitats, and destruction of thousands of bee hives due to lack of knowledge. 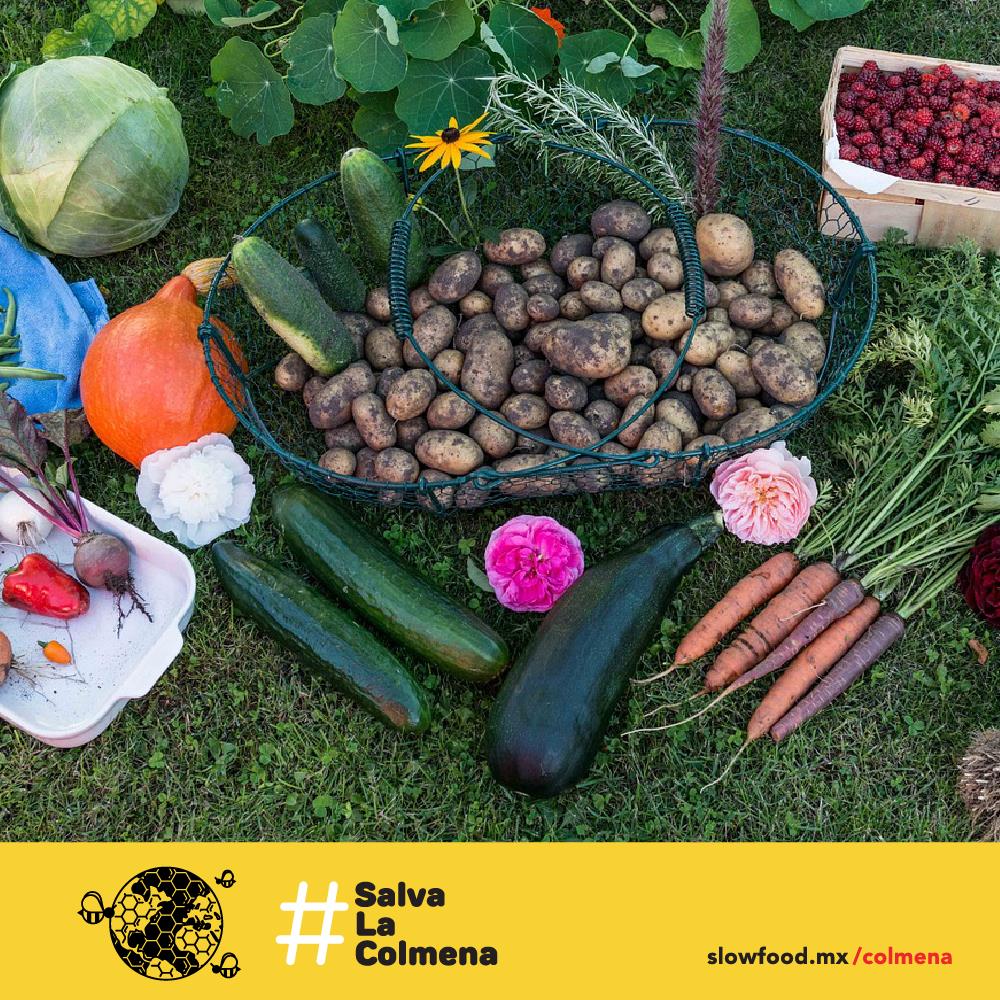 Recent data show evidence of the alarming situation: In 2016, beekeepers from the city of San Luis Potosí in Mexico reported the death of 3700 hives, due to the application of insecticides on sorghum crops. During the same year, Monsanto was sued by organizations and citizens of the Yucatan Peninsula, in view of their intention to plant genetically modified soy, which would irreparably affect the bees of the region. Meanwhile in France, mortality rates have increased by 30-60% and in the US by 60-80%.

Activities carried out by Monsanto have had particular influence on the vanishing of bee populations. Research found that pesticides used on crops have become a part of the DNA structure of the plants, which have been ingested by bees for decades. Intensive use of these genetically modified herbicides and pesticides by the chemical giant caused bees to become susceptible to spores and bacteria, leading to an increase in their death rates. Monsanto has denied to take responsibility on the issue, even though tests done on bees have given us the evidence.

In the fight against rural poverty and land grabbing, the Slow Food network in Mexico has been very active through the promotion of their local food heritage. The coordinator of Slow Food Mexico, Alfonso Rocha Robles, decided to launch the campaign because this topic is of great concern at the moment. It was also considered a necessary move to unite forces with other organizations as well. “In the global context of Mexico, we decided to give priority to the bees, in order to join the efforts of other national and international campaigns such as Ponte Abeja of the Organic Consumers Association and Three Million Voices to Save the Bees of avaaz. In this way, we will be able to place the problem of bees on the national media’s agenda, and treat it as a priority.”

Minelia Xiu, meliponiculturist and producer of the Yucatan Xunancab honey Presidium, has also witnessed changes in the last years: “I had never observed such irregularity in the flowering season of endemic Mayan vegetation – much of which is now endangered due to changes in the use of land. This also causes a reduction in the production of honey, and I believe that over time the situation will become more alarming.” Minelia added that Yucatan state had been declared free of transgenics but the real problem is something more immense: climate change. Production cycles are altered with increased temperatures, ” unfortunately this scenario brings a serious risk of population loss for both species of bees. Over the years this will be aggravated – taking into account that Yucatan is the largest honey producing state in the country – which would mean that the honey market would collapse and yet worse, all the species that these animals pollinate would also be at risk.”

As meliponiculturists, they do not want to be simply collectors of honey, but guardians of the endemic vegetation. “It’s a difficult task, but not impossible. We have been forced to take action to protect the bees and imporve the production practices in meliponiculture, which we have achieved thanks to the help of Slow Food.”

The convivium has published several infographics that illustrate facts in an easily understandable way. They are also spreading awareness through their social media channels. In addition to the importance bees have in maintaining biodiversity, this campaign to save the bees should also be seen as part of a much bigger fight; saying stop to land grabbing and to careless activities done by chemical giants that damage the balance of agricultural ecosystems and ignore the rights of rural communities.
Sources: