The Wadden Sea, a UNESCO World Heritage site & the largest unbroken system of intertidal sand and mud flats in the world, is also home to Barbara Rodenburg, who has dedicated her life to the sea as a fisher, a biologist and as a chef. Barbara takes us through her journey from joining Slow Food to her experiences at the Wadden Sea, after serving us with some delightful wild oysters & shore crabs from the Slow Food Presidium of Wadden Sea Traditional Fishers at the Chef’s Alliance Kitchen, Slow Fish 2017.

Slow Food: How did you get involved with Slow Food to begin with?

Barbara: Well, short version, somebody just when we were completely exhausted, and didn’t know where to go or what to do, somebody just sent us to Turin!

Slow Food: And that’s it? That’s how it began?

Barbara: That’s it. She said we should go to Terra Madre in Turin, and we had never heard of Slow Food, we didn’t know what Terra Madre was; we had no idea. But, she just put us on the list of the Slow Food’s list of people coming to Terra Madre.

Slow Food: So how did you get inspired to get involved with the whole ideology that Slow Food stands for?

Barbara: By being at Terra Madre only once, from the first minute. 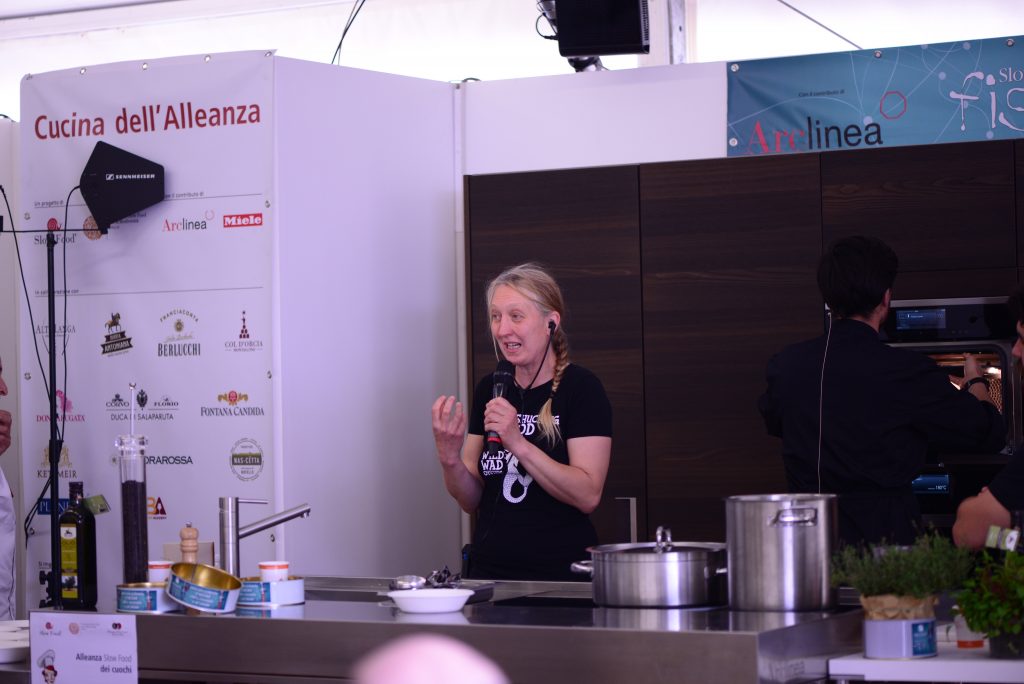 Slow Food: Okay, so it says in your bio that you have dedicated your life to the Wadden Sea. Can you tell us about your journey a little bit? Where did it all begin?

Barbara: I haven’t necessarily dedicated my life just to the Wadden Sea but I think moreover to small-scale fisheries and food production, and food harvesting from the Wadden Sea because that is our natural reserve. But in the end, it’s about harvesting food from nature in a proper way so that nature can keep on providing us with the most beautiful and healthy food. So yeah, that is something that I find really important and that I wish to work for.

Slow Food: What makes the Wadden Sea so special?

Barbara: It’s incredibly beautiful and very harsh; it’s dangerous because of the currents. It really makes you reflect on who you are and where you are, at the Wadden Sea you’re just that small. I think that just for me, as a person, I like to feel how small I am in comparison to the whole planet and to be out there in nothing with only water and sand and wind and birds.

Slow Food: What impact is climate change having on the Wadden Sea and how has it affected biodiversity?

Barbara: The Wadden Sea is definitely warming up and because it’s very shallow it warms up much quicker. Shallow coastal waters are most vulnerable to climate change because the seawater heats up much quicker since it’s not so deep. And also, it’s not only the temperature, but the carbon dioxide in the air, which is absorbed by the seawater and which makes it more acidic. These are small changes but they make a big difference for things like plankton, and the species of plankton at various times of the year are very important for the larvae or for fishes and everything. So, any minor changes in the plankton can have a major impact on fish stocks and shellfish stocks too.

Slow Food: How has it affected the crab and oyster populations?

Barbara: It’s impossible to say what affected what, how much and in what way. There’s the acidification, there’s warming up, there’s more wind which means more waves and higher tides. There’s more sediment dissolved in the seawater, more movement of that sediment, and that’s one thing that’s due to climate change. But we also have a lot of coastal activities, like new shellfish farming installations at the Waddensea, and just off the coast, there are windmills, wind parks, sea-weed farms….  And also more and more quick boats going up and down which create noise pollution. There’s so much noise in the water, there’s so much happening at the same time, it’s impossible to say what first causes the loss in biodiversity. We have to go and ask the fish!

Slow Food: Lastly, why just crabs and oysters and not other fish in the sea?

Barbara: Smiles. Because we wanted to showcase the things that are abundant, and show people what you can do with them, how you can prepare them. Just let people experience something new!