The Visayan Islands are a large yet little-known group of islands in the center of the Philippines, home to around 20 million people speaking 30 indigenous languages, and 2000 native varieties of rice.

Georie Pitong is the coordinator of Magsasaka at Siyentipiko para sa Pag-unlad ng Agrikultura (Farmer-Scientist Partnership for Development), or MASIPAG, on the Visayan Islands, a Terra Madre food community—the acronym also means “hardworking” in Filipino. The organization, as she tells us, was founded to promote the sustainable use of natural resources and the protection of biodiversity from below, primarily through farmers’ control of seeds, the means of agricultural production and all the knowledge necessary for its proliferation.

“Less than a third of the farmers here in Visayas own their land. Most of them work on land that is owned by others, creating problems of tenure and social friction,” Georie explains. “The big land-owning families have sugar plantations on massive esates, haciendas. These relics of the colonial era are still with us today, and can be as big as 5000 hectares in size, while the average small-scale farmer cultivates just a single hectare, and mostly on marginal, hilly lands where the soil is not as fertile. The best land, of course, belongs to the big landowners.

“There is also an increasing trend of land grabbing by these bigger landowners, who want to expand their plantations of GM corn, sugar, bananas, pineapples and palm oil trees, as these products can be exported with high profit margins. They have the full backing of the State in this endeavor, because on paper it boosts the economy, while in reality it robs normal people of their food and livelihood. Instead our land is used to export sugar to Europe, China and America.”

Georie works with small-scale, resource-poor farmers to take back control of their seeds, particularly rice. Rice is the staple crop in the Philippines, as with much of Asia, and over the course of centuries thousands of varieties have been developed by farmers working to adapt to their local conditions. However, this all changed with the onset of the Green Revolution, which was kick-started by the International Rice Research Institute (IRRI), founded by the Ford Foundation, the Rockefeller Foundation and the Government of the Philippines in 1960. They developed a small number of high-yield, genetically-engineered strains, like IR8 and the so-called Golden Rice, which soon supplanted the countless native varieties in rice fields around Asia. We’ll never know exactly how many varieties were lost, but MASIPAG has managed to collect the seeds for some 2000 traditional Filipino varieties, and are now developing new varieties through the traditional technique of selective breeding. In the meantime, MASIPAG is continuing to protest the State’s efforts to promulgate Golden Rice.

“It’s important that we continue breeding new varieties of more resistant rice because as we have observed, pests are proliferating as evolve and adapt to chemical fertilizers and pesticides, resulting in the emergence of new diseases and the resurgence of old ones. Farmers need to be able to protect their harvest. For farmers close to the coast that might mean rice which is more resistant to saltwater, and as drought becomes a more serious problem, we need rice which can thrive with less water in general.”

In 2015 and 2016 the Philippines experienced its longest drought since 1997, with a full nine months without any rain. In other years, like 2013, unpredictable and violent typhoons posed a bigger threat to the harvest. “Being able to survive both drought and flooding poses a huge challenge for the farmers who still need to produce food for their families and communities.” 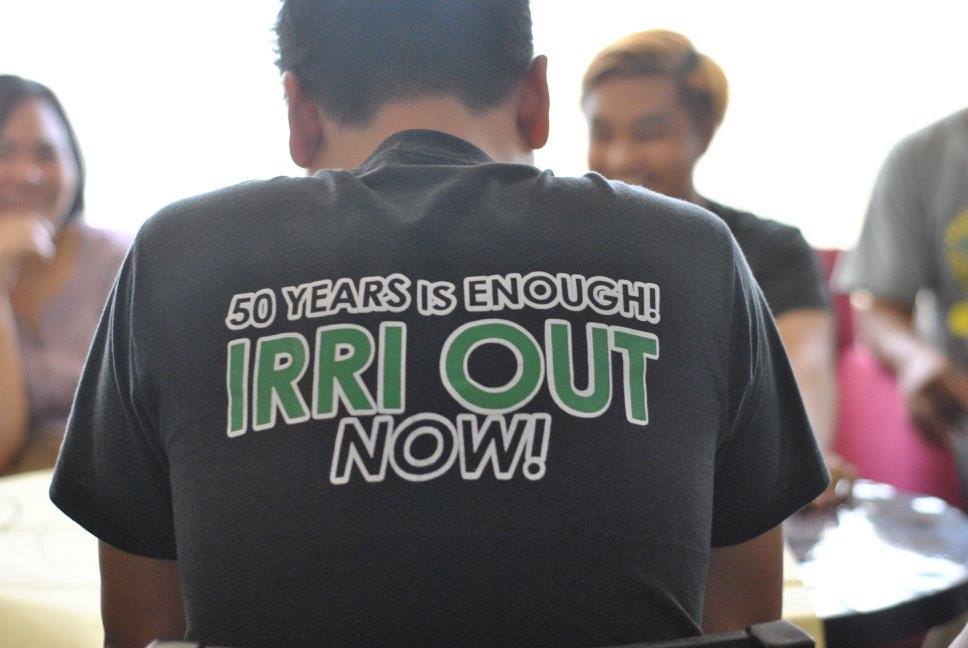 “When I first came to Terra Madre I was impressed by how Slow Food organized and brought people together from all around the world with different seeds, different crops. I brought several varieties of our native rice for our stand. It was great to see that it’s not only our community that is fighting to conserve biodiversity, but so many people around the world, and I appreciated how Slow Food allowed them to meet and share ideas and experiences.

“Back home, on Terra Madre day, we organize activities to promote our small farmers who are feeding our communities with diversified sources of nutrition. This is especially important for involving children. Young people are exposed to urban culture through the media, and are attracted to the idea of city life and leaving their farms. We organize a summer camp for children so they can visit farms, and learn how to identify seeds, grow plants and harvest them, to show them the value of real food.

Slow Food can help give our community a voice, and amplify it, and help us to connect with people and organizations in other Asian countries too. We want to unite in solidarity, with a united voice on these issues, and greater capacity to attract international support for our local campaigns.”