Despite the European Union recently launching the new Farm to Fork and Biodiversity Strategies with a set of ambitious pesticide reduction targets, a real prospect for change remains vague as, until now, the EU has been failing to meet its commitments in terms of pesticide use. A recent report by the European Court of Auditors concludes that the EU has done very little to halt the decline of wild pollinators so far, while environmental lawyers argue that the EU is failing in its legal obligation to align its agricultural policy with its environmental commitments.

Poor Performance in Promoting the Sustainable Use of Pesticide

Three of the EU’s key pesticide policies are currently under review, as part of the Commission’s “better regulation” agenda. The two regulations covering the approval and authorization of pesticides, and the maximum level of pesticide residue legally tolerated in food are under review since 2016. More recently, the European Commission has proposed another review of the Directive on the Sustainable Use of Pesticides (SUP) within the context of the Farm to Fork Strategy and has opened a public consultation on the roadmap.

In its review of the progress made under the SUP, the Commission concludes that a majority of Member States have failed to promote sustainable use of pesticides, and are not meeting the requirements set out in the directive. It highlights in particular the weak implementation of Integrated Pest Management.

Responding to the public consultation, Slow Food urges the Commission to go forward with the revision of the directive without further delay, arguing that there is no need for further impact assessment of the policy as the reasons for its weaknesses are clear already. Slow Food finds it particularly worrying that the Commission suggests a decrease in focus on finding ecological alternatives to chemical pesticides as it calls to take advantage of new findings and “technologies and the wider application of innovative and precision farming techniques” that may help to reduce the use and risk of chemical pesticides. Instead of investing in new innovative techniques, Slow Food would like to see more research on developing and increasing the use of agroecological techniques.

Concerns over the Commission’s Commitment

Scientists, civil society groups, and several EU bodies have been long raising concerns over the Commission’s lack of commitment to biodiversity and pollinators protection, and prioritization of intensive farming instead.

At the beginning of July, the European Court of Auditors has stated that “EU measures did not ensure the protection of wild pollinators,” naming the Common Agricultural Policy (CAP) as one of the key drivers of their declining numbers. In addition, the auditors point to pesticide policies, which are so far too weak to effectively protect them. In this light, the recent findings by ClientEarth go further by warning that the new CAP reform proposal is not aligned with the Commission’s European Green Deal commitments, despite its legal obligation to do so. According to ClientEarth, with its current lack of binding targets, the CAP proposal “is likely to neutralize the potential power” of the Farm to Fork and Biodiversity strategies and is, therefore “set to undermine the European Green Deal at large.”

The Farm to Fork and Biodiversity Strategies overall do not have a binding power. Their objectives and targets will need to be attained via various legislative measures, such as the CAP and other policy reforms. However, if the CAP reform will remain misaligned with the European Green Deal, it is highly unlikely that pesticide reduction targets of 50% by 2030 will be met.

The significant decline of bees and pollinators in Europe and worldwide, together with the wider collapse of biodiversity, in recent years has raised the alarm among the scientific community and general public. A broad group of scientists has recognized that the current CAP is among the main factors that have led to the current climate emergency and biodiversity loss. Meanwhile, the extensive use of synthetic pesticides in agriculture has played a significant role in the loss of bees and other pollinators.

ECI “Save Bees and Farmers”: a Response to the Lack of Concrete Actions 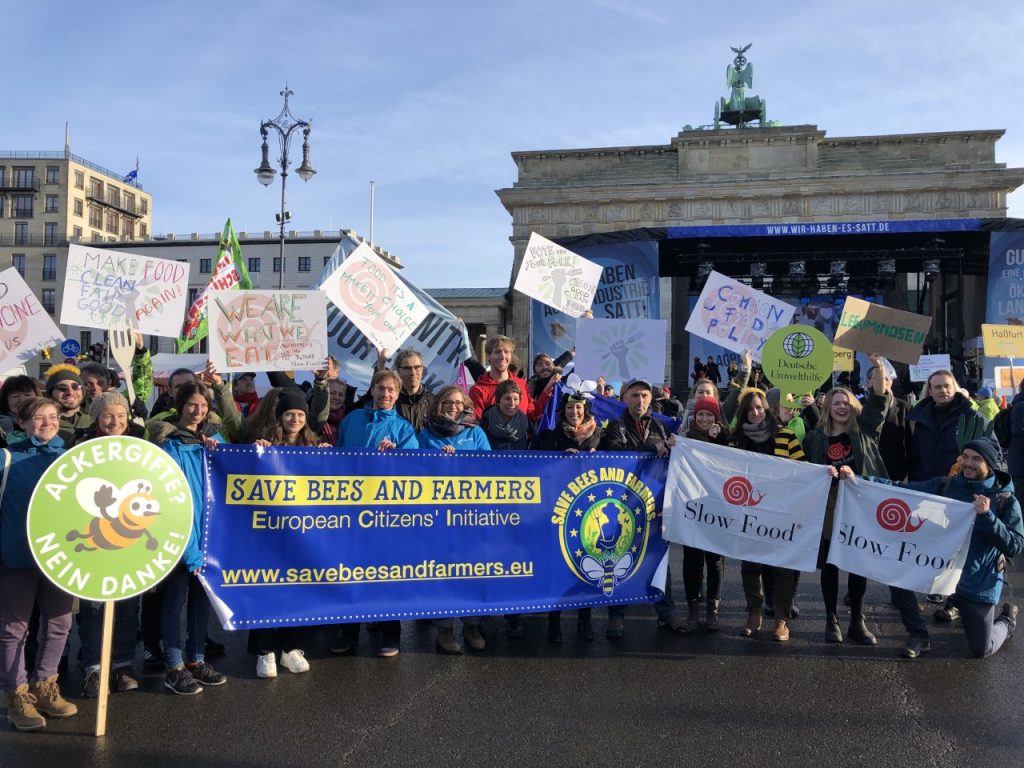 Having long been wary of the lack of concrete actions on the Commission’s side to improve the state of protection of pollinators, as well as to help farmers become independent from the agrochemical industry, in 2019 PAN Europe co-initiated the Save Bees and Farmers European Citizens Initiative, which Slow Food Europe supports.

The initiative aims at collecting 1 million signatures across the EU to demand that the Commission set forth legal acts to phase out synthetic pesticides in the next 15 years, restore biodiversity on farmland and support farmers in the transition towards agroecology.

Support the European Citizens’ Initiative “Save Bees and Farmers” by signing it here.