Every year billions of animals around the world suffer in terrible conditions. Those trapped in cages live particularly horrific lives. Slow Food supports the European Citizens’ Initiative “End the Cage Age” and has been supporting farming that respects the planet and animal welfare for over 20 years.

Good livestock farming practices can be found among many members of the Slow Food network. We talked to Rainer Hofmann, from Blaufelden-Wittenweiler in Germany, a farmer from the Limpurg Ox Presidium. The Limpurg is the oldest surviving cattle breed in Württemberg. Particularly suited for rearing in wild conditions, even on steep pastures, it is perfect for the local mixed landscape, characterized by hills, mountains, the Swabian-Franconian forest and the Rems and Lein river valleys.

What are the main features of your Presidium breed and why is it so important to protect it?
The Limpurger Rind (Limpurg cattle) is an endangered heritage breed that developed in the northeast of the German state of Baden-Württemberg. Its name comes from the county of Limpurg, south of the city of Schwäbisch Hall, about 50 kilometers east of Stuttgart.
Limpurg cattle belong to the group of so-called yellow breeds and the color of its coat ranges from pale to reddish yellow. The animals are naturally horned and of medium size. For centuries this indigenous cattle breed was used for the production of meat and milk and as a draft animal. It was kept on small farms and is well adapted to the steep pastures and harsh conditions in the local area.
In the 19th century Limpurg cattle were famed for the quality of their beef, which was known for being particularly tender, juicy and tasty. The meat was often sold abroad, mainly in France and Switzerland.
The introduction of Simmental cattle, the mechanization of agriculture and changing consumer habits have led to the number of Limpurg cattle falling drastically. In 1987, when the Limpurg Cattle Breeders’ Association was founded, there were only 56 animals left. A conservation breeding program was started and by 2018 there were 650 animals registered in the herdbook.
The main objective is to safeguard the breed as a genetic resource and as a cultural good in its original native land. The breed fulfills all traits necessary for extensive landscape management and for the promotion of a regional food brand.

What advantages has the Presidium brought?
The Limpurg breed used to be famous for the quality of its meat, and 20 years ago the breeders started to use this quality to find a market for the beef. They began to rear pure-bred oxen and to sell the meat to top restaurants and butchers. In November 2005 the Limpurg ox was included in Slow Food’s Ark of Taste and in April 2009 it was recognized as a Slow Food Presidium. This helped the application for a Protected Denomination of Origin (PDO). In September 2013, the European Commission awarded a PDO to the Weideochse vom Limpurger Rind. The Presidium and the PDO have contributed to the promotion of this heritage breed and its unique qualities, improving its economic viability by boosting both demand and prices for the meat obtained from the oxen. They have also helped with the marketing of other products, like beef from fattened heifers and cows, thus further increasing the benefits for farmers. 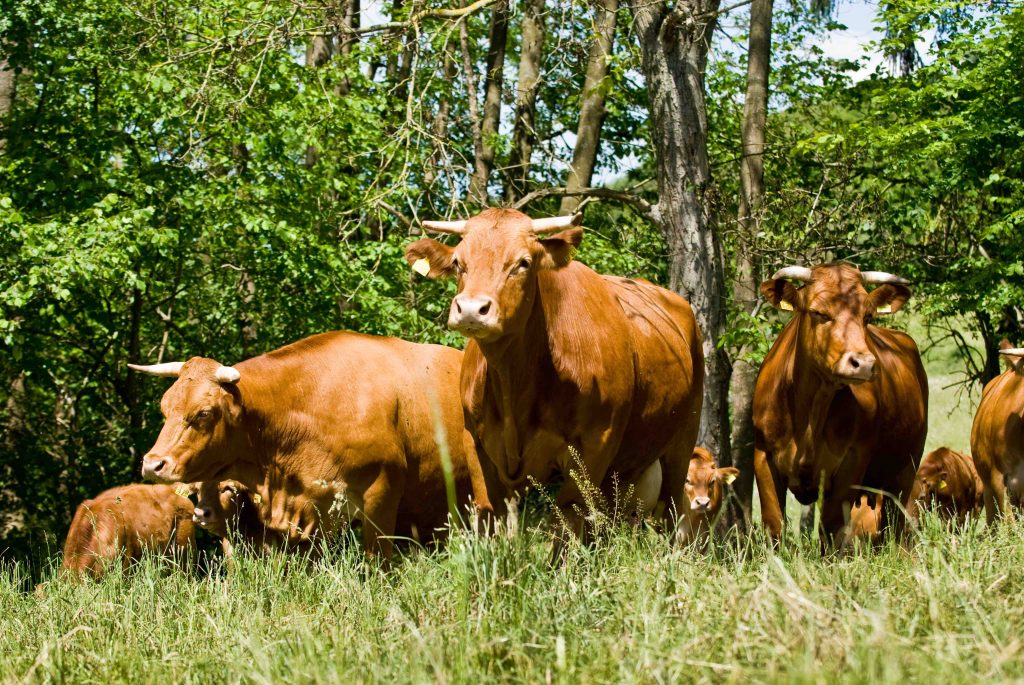 What do animal welfare and respect for animals actually mean when it comes to raising cattle?
Attention to animal welfare is typical of the farming of the Limpurg breed. The cows can live for 8 to 12 years, with 7 to 9 calves, and veterinary treatment is very seldom needed. This means low costs for external services.
The farmers treat their animals with respect. The traditional breeds had been working animals as well and the farmer and the cattle had to work as a team together, which demands respect for the animals.
The production protocol requires the use of sustainable practices, for instance allowing the animals to graze on pastures during the grass-growing season and keeping them in sheds during winter with sufficient space and straw for each animal, with all their needs met. The feed comes from the farm itself or from the local area.
The breed is well adapted to harsh conditions and being kept on pastures for land management, thus helping to increase and improve the local biodiversity.
The conservation breeding program ensures that inbreeding is avoided and that the breed’s typical traits are preserved: high-quality beef and healthy, medium-size animals with a good character.

What’s next for the project?
An important step was the development of a quality system in cooperation with butchers and chefs, in order to market the whole animal. Respect also means to using the whole animal, from nose to tail. This means producing many different quality products like fresh meat, different types of sausages and convenience foods. From this point of view a professional marketing system is necessary to make it possible to work together with the farmers and butchers on a high level.
The project is also showing promising future developments in regards to environmental protection and increasing pasture-related biodiversity such as insects, birds and plants.

Do you think that initiatives like the ECI “End the Cage Age” can be important?
The vote at the counter is the vote that counts. As Carlo Petrini said, “Vote with your fork.” Consumers must be made aware of local products, local products must be the hero. We need to communicate the side effects of these products, like increased biodiversity, better land management and the fact that pastures with vegetation act as a carbon sink. We need to open the barn doors to visitors and show them round the pastures. People—producers as well as consumers—need to be convinced of the importance of respectful treatment of animals. Every local project helps to spread the idea.
There are already some examples of projects in Europe that focus on the promotion of genetic resources. The “eCompendium of Valorisation Projects” of European agricultural genetic resources of plants and animals can be viewed here.