Archive » Ræst Meat – The flavour of wind, sea and scarcity

The Faroe Islands are a small archipelago in the North Atlantic Ocean, 200 miles north of their nearest neighbor, Scotland.  I arrived in the capital, Torshavn, on a dark, rainy November morning in November, after a 36-hour ferry ride from Denmark. I was curious to find out how the inhabitants survived in a place where hardly any trees or vegetables can grow, and where the force of the wind and the waves from the sea means just getting there is a risky business that requires strength and the right tools.  Coming from Italy, a country which has vegetables, sun and access to fresh meat all year around, it was even more interesting for me to find out how people develop their food culture in a place with such limited food variety. 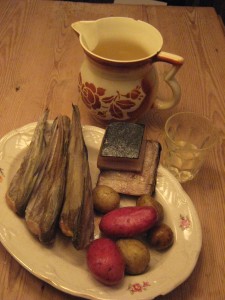 On one of my first evenings I took a stroll around the village I was staying in.  I noticed cod fish hanging to dry on the roofs of the houses – and attached to the houses were small sheds that gave off an intense aroma of fermented meat: signs of a traditional method of conservation still being used today. The process of airing meat until it is half dry is called ræst, and can be used on all sorts of meat, from fish and sheep to whales and birds. Ræst meat neatly illustrates Faroese food culture and history, because it is tightly connected with food availability on the islands, their climate and perceptions of taste.

Many people asked me if it was cold during my time on the islands, which would seem a reasonable question given their latitude, but the reality is quite different from what you might imagine. The average temperature during winter is three degrees Celsius, and this plays a crucial role in the fermentation process, as it is hot enough for bacteria to work. The climate is mild because the islands are surrounded by the sea, which helps maintain a steady temperature throughout the year, with mild winters and cool summers. On the other hand, the oceanic wind is extremely strong, and has a high salt content. These factors all help in the drying and fermentation of meat, or turning fresh meat into ræst meat.

What are the food sources on the Faroe Islands? If this question was asked of any other random country the answer would probably be far too long to include in an article like this – but not for the Faroe Islands. The meats available include sheep, hare, pilot whale, fish, birds, poultry and cows (which are mainly used for dairy).  The only vegetables grown are potatoes, kohlrabies and rhubarb. Though it is possible on a few of the islands to grow carrots, onions, cabbage and a few other varieties, traditionally this hasn’t been practiced much.  Fundamentally meat, fish, potatoes and dairy make up the Faroese daily diet. It may seem incredible that people survive and prosper with such a monotonous diet, devoid of fruits and vegetables, but they do! The scarcity of food has obviously made the conservation process even more important, in order to have meat all year round.  Sheep are slaughtered once a year, in October, and hanged in small sheds (called hjallur in Faroese) where they are left to air-dry for three to seven months, depending on how dry the meat needs to be. No salt is added, as the wind alone contains a sufficient amount.

Visiting an elderly man in the village, I learned that these techniques are still being practiced widely, even though modern deep freezers exist on the Islands. Ræst meat is still eaten today more for its flavor than because of necessity.

I was invited to taste ræst lamb at my neighbor’s house. Even though dried sheep meat is not easy to find commercially, it is customary to share the meat with family and friends, so most people on the Faroe Islands have access to it.  The meat was dark red and salty, with a strong wild animal flavor, and though it was soft in texture it was also hard to chew.

Back in Italy, some people found the odor of the meat to be rotten, while others perceived nutty, peppery and earthy aromas, reminiscent of mushrooms.  The earthy flavor was also compared to porcini mushrooms, with an aftertaste of sheep’s milk or caproic acid. Everyone agreed that the flavor was particularly strong and persistent!

Ræst meat can be seen as a symbol of how people have survived in a harsh environment, using the climate to their advantage. With its unique conservation method and distinctive flavor, ræst meat represents not only the history of Faroese food culture, but also its present.