An extreme Slow Food challenge with Italian activist Oliviero Alotto to explain how climate change affects the environment, animals and local communities. From June 3 to 6, more than 200 kilometers of running and canoeing

From Greenland to the Gardens in Africa with Slow Food

A solo race and an extreme enterprise to denounce the consequences of climate change and raise public awareness of the need for everyone to do their bit – starting from simple everyday actions. This is Race against Time, the initiative Slow Food is launching in partnership with one of its leaders and activists, Oliviero Alotto of Turin who, from June 3 to 6, will cover more than 200 kilometers to raise funds for the Ten Thousand Gardens in Africa project.

The race will pass through the spaces left free by the withdrawal of glaciers on the planet’s largest island, joining them virtually with another place – the African continent – that, albeit blameless, is now paying a heavy price for the effects of climate change.

Race against Time will be an opportunity to relaunch one of the Slow Food movement’s most important projects: the Gardens in Africa fundraising campaign.

Each kilometer run will be transformed into a concrete contribution to the Planet and will go towards the creation of a garden at the school in Kachwamba in Uganda, ensuringthe children and the community of this rural region access to appropriate food that is sustainable for nature and the environment. 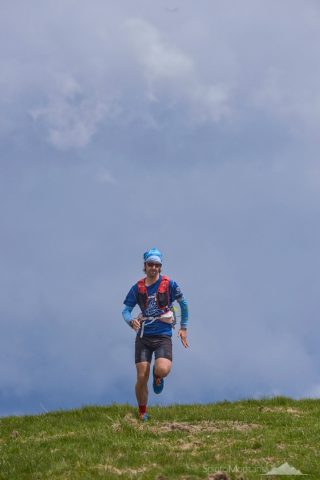 The Course
The course will unwind over a distance of more than 200 kilometers through the ancient river glacier valleys in the southwest region of Greenland, where the effects of climate change are most evident. It will go past Kangerlussuaq (where the island’s airport is situated), Kelly Ville, Ice Cap and Sisimiut (the town with the second highest population).

Who is Oliviero Alotto?
Slow Food’s Turin leader, he has run the Terra del Fuoco association for years and has always engaged in raising awareness about the protection of the environment and the Planet. He is a lover of the mountains, athletics and trail running, but also of food and wine. For him, running is not simply a sport but also a way of bringing peoples together and discovering the quintessence of nature.

Training Diet
The athlete’s diet, fundamental for an undertaking of this type, will be monitored by the biologist and nutritionist Felicina Biorci. During training it will involve intermittent fasting: hence two to three meals a day to be eaten by 4pm at the latest, to be able to fast for 12-16 hours before breakfast the next day. Judging from the latest studies, this type of fasting promotes autophagy, the regulated mechanism of cells that keeps the organism functioning properly, reduces inflammation tracers and improves the gut microbiome. To maintain hematocrit levels, which ensure an abundant supply of oxygen to the tissues, the diet will be high on beets, while legumes and hemp will provide the right amount of protein. Teff, heirloom grains, rice, buckwheat and millet will supply carbohydrates, and cacao will play a fundamental role in offsetting damage from excessive workloads. The diet will obviously also include 700 ml of water, morning and afternoon.

Racing Diet
Meeting the energy requirements of running for 40-60 km a day at Arctic temperatures involves consuming plenty of carbohydrates. Given the decision to follow a sustainable diet, animal protein will be out of the question and will be compensated for with dried fruit, chestnuts, rice, dates and hemp. 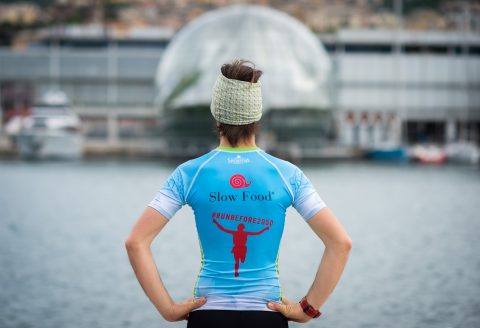 Athletic Training
Alotto prepares constantly for challenges of this kind, running and training daily, following a precise schedule drawn up with an athletics coach. For the Greenland event, he has run two races of more than 100 km in three weeks and two over 50 km. He runs at least 100 km a week, on top of which he also does bicycle training.

Climate crisis’ facts
– In Greenland in 2003, 111 cubic kilometers of ice disappeared. Ten years later, the number had increased almost fourfold to 428 cubic kilometers (Danish National Space Institute, 2019) at a rate much faster than predicted.
– Glaciers, which cover 10% of the earth’s surface, are disappearing rapidly: since 1994 we have lost about 400 million tons a year.
– According to the Intergovernmental Panel on Climate Change (IPCC), if no limitations are made on greenhouse glass emissions, by the end of the century the average temperature will increase by 4°C and more. But even with an increase of just 2°C, the environmental and social consequences are expected to be serious anyway.
– At the global level, food production alone is responsible for just over a fifth (21%) of greenhouse gas emissions (IPPC AR5 Synthesis Report, 2014; The State of Food and Agriculture, FAO 2015).
– According to FAO, in 2012 those generated by the use of manmade fertilizers accounted for 14% of all agricultural emissions. This is the source of primary sector emissions that is growing fastest, having increased by about 45% since 2001 (Food Wastage Footprint: Impacts on Natural Resources, FAO 2015).
– In the period between 1990 and 2005, 71% of deforestation in Argentina, Colombia, Bolivia, Brazil, Paraguay, Peru and Venezuela was caused by the growing demand for pastureland (Livestock and Landscape, FAO 2012).
– The African continent is responsible for only 4% of greenhouse emissions (African Union Commission).
– About two thirds of the populations of sub-Saharan populations are subject to the effects of climate change insofar as they depend on subsistence farming.

Slow Food Ten ‘Climate-friendly’ Tips
We can all do something every day to help mitigate climate change.