Archive » Protests in Colombia for peace, equity and social justice. The difficult situation according to the voice of Slow Food Colombia

I remember the first time that I was invited to participate in Terra Madre in 2006: In his speech welcoming the food communities around the world to Turin, Carlo Petrini spoke of the power of the gesture, this subtle but powerful statement was an air of encouragement to the path that I had started a year ago, bringing together my concerns as agronomist and cook, about the power of food, the symbolic power that holds a cook to name the identity of a territory and culture, that holds a gesture in the kitchen to change the reality of a place, the power we have as agents that act in the field to recognize work and peasant identity, the power that citizens have from our daily acts to influence the future of the planet.

We believe in a society where peasant work is justly recognised, where the diversity of our culture strengthens us and where there is no reason to ignore it, criminally point it out or make it invisible as this government has done.

We march because the imperfection of this “democracy” has ceased to represent our voice, because we believe that a society where people dissent peacefully is a healthy society. 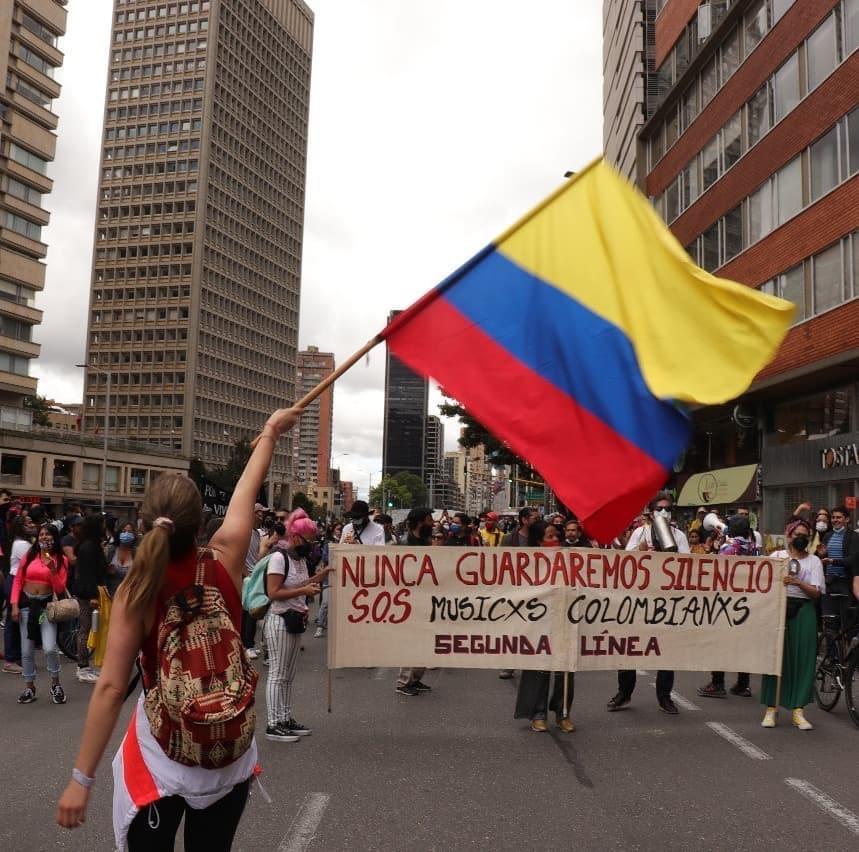 For several days now, large-scale protests have been going on in many Colombian cities against the government of President Iván Duque, which in some cases have led to very violent clashes.

“Started on April 28, the protest was called by different social sectors, in view of the imminence of a tax reform totally harmful to Colombians, but this was not its only trigger. The origin of this strike stems from a serious political, social and economic crisis, the product of a government that has failed to listen to the clamour of its people for peace, equity and social justice, and that the pandemic has worsened with the measures adopted to stop the spread of the virus”, says Liliana Marcela Vargas Vásquez, focal point of Slow Food projects in Colombia.

“One of the sectors that has joined this strike is the peasant sector, whose economy has been hard hit by the restrictions imposed on access to markets in urban centres during the pandemic, but also by free trade agreements that put them at a disadvantage compared to imported agricultural products that are entering and being marketed in the country at lower prices. Similarly, these same are farmers are suffering from the latent risk of the return of aerial glyphosate fumigations, announced by the government”, explains Liliana. The state is threatening to resume aerial spraying – fumigation with glyphosate on coca fields – which until 2017 had been banned and as of 2018 there is talk of resuming the spraying.

Since the beginning of the strike, the government has been characterised by the adoption of highly repressive measures in the face of the Colombian population’s just right to social mobilisation. At the time of writing this article, the campaign “Defending Freedom Is Everyone’s Business” has registered 49 deaths, 87 victims of gender-based violence, 578 injured people, 846 complaints of abuse of power, authority, aggression and violence, and 1,460 people detained, most of them under arbitrary procedures. [1] 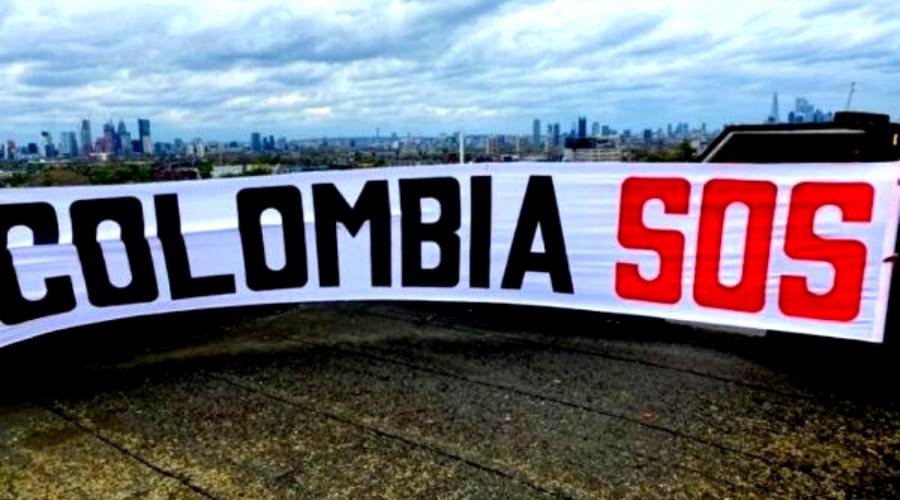 Below you can find the press release from Slow Food Colombia.

We, the members of the Slow Food network in Colombia and activists for the right to good, clean and fair food, declare our full support for the massive mobilizations that have taken place throughout the length and breadth of our country. We emphasise to the international community that the marches and protests by Colombian citizens have been carried out in full autonomy. The demonstrators, as well as those who, because of the pandemic, have not been able to express themselves in the streets, publicly reject the regressive policies of the national government that categorically affect, among other issues, the transition towards the sustainability of food systems and condemn the cruel repression with which the security forces have tried to silence the national outcry.

The demands of the current mobilisation stem from a sense of discontent of the Colombian population since 2019, when the country mobilised widely demanding the protection of our social and environmental leaders, rejecting the monstrous inequalities generated by the current economic model (unequal, exclusionary and unsustainable) and demanding our basic rights to health, education and the full implementation of the Peace Accords. Now, however, new issues are being added and are forcing us to mobilise, even in the midst of a new peak of the pandemic that threatens our lives as never before. No, it is not an enemy or terrorist hand that promotes the marches or pays for them. It is the need to stop injustice and the indolence of the powerful.

The tax reform proposal, based on the efforts of the middle and lower classes, but complacent towards the most powerful, sought to impose itself at a time of generalised economic crisis in Colombia. According to the latest figures published by the National Statistics Department (DANE), by 2021 more than 21.02 million people will subsist on less than $331,688 a month, an amount that, according to DANE, constitutes the poverty line in Colombia. Worse still, 7.47 million Colombians live on less than $145,004 per month, which constitutes the extreme poverty line, and, of course, this income is not enough to achieve optimal health and dignified living conditions. According to official DANE statistics, 2.4 million households (1.6 million more than a year ago) do not manage to eat three meals a day.

Meanwhile, state programmes persist in prioritising an agro-export model, leaving our peasants to their fate, who do not have the minimum support to feed themselves or to meet the demand of Colombians. On the other hand, the threat of fumigations with glyphosate returns, the importation of food products persists and the deforestation of the territory for the implementation of extensive cattle ranching and extractive mining is intensifying.

Faced with this situation, we demand, with the international community as a witness, the guarantee of our fundamental rights:

For the protection of the lives of demonstrators and respect for the exercise of the right to protest and social mobilisation, we demand the cessation of the actions of state forces outside of human rights standards.

We also reject acts of violence that delegitimise the right to protest.

We demand the right to life and due process that all Colombian citizens deserve.

We demand the essential attention of the State to social, economic, cultural and environmental rights, especially the right to food, through a universal basic income that allows families to overcome the dramatic difficulties they are experiencing in the current crisis situation.

We demand immediate attention from the State to small farmers who now, more than ever, constitute the fundamental support for the survival, health and food autonomy of our population.

We demand that the government immediately enter into a real dialogue with the social forces that are demonstrating and meet the just demands of the millions of Colombians who are mobilising.

We ask the international community to accompany us by monitoring the proposed dialogues and following up on the agreements that emerge from them.

Finally, we invite all organisations working for the right to food, food security and food sovereignty, and the general public, to contribute with actions that allow us to overcome the current crisis and build the conditions to live in a peaceful and equitable country with sufficient guarantees so that all people can have access to good, clean and fair food. 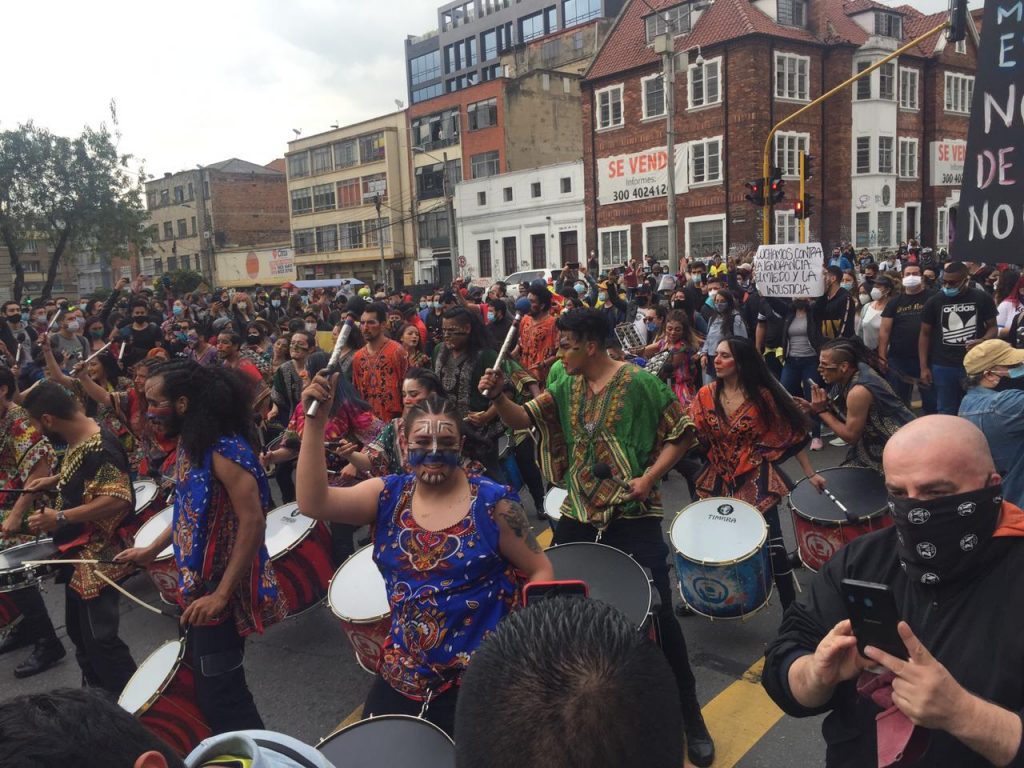