On August 29 – September 2, representatives of the European Slow Food Youth Network (SFYN) will meet in Bavaria, Germany to plan joint political actions at EU level, and to outline concrete ways towards a more sustainable future and a sustainable food system. 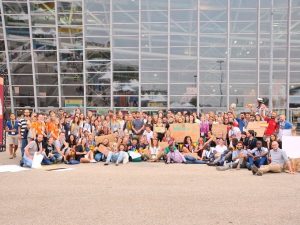 Throughout a number of workshops and lively discussions, 60 young people between the age of 16 and 35 will address challenges that our food system is facing today. The SFYN activists who are committed to good, clean and fair food, both privately and professionally come to the meeting from 16 European countries: Albania, Armenia, Austria, Belgium, Bulgaria, France, Germany, Italy, Macedonia, Portugal, Romania, Russia, Slovakia, Sweden, Switzerland, and the Netherlands.

“Fighting climate change and food waste, preventing biodiversity loss, and trying to shape our food system positively is not something little to aim at. As the SFYN, we believe that active grassroots can make big changes. A meeting like this is an incredible source of energy which reminds us that we are many and, together, we are ready to change the world,” says Valentina Gritti, global coordinator of the SFYN.

The SFYN will focus their discussions on how to better promote a sustainable food system in Europe, how to make our everyday lives more climate-friendly and resource-conserving, and how to protect species.

Yael Pantzer from the European Office of Slow Food will be one of the speakers at the meeting. She is going to address the importance of European policies to our everyday lives, and explain what kind of role Slow Food plays in political discussions around food and farming at EU level.

“As the EU institutions are constantly working on policies that concern agriculture, food safety, animal welfare, and environment, it is vital for activists to know that there are ways to influence political decisions and express our position at the highest levels. As the European Office in Brussels, we work hard every day to make sure that Slow Food’s voice is heard by EU decision-makers. It could be either through letters, meetings, events or protest actions.”

The SFYN meeting in Germany will be a great occasion to involve young activists in organizing joint political actions – the European Days of Action for Good Food Good Farming. In October, for the second year in a row, Slow Food Europe will join forces with other civil society groups across Europe to call on policymakers to build a better food and farming system. The SFYN will also take part in the Europe-wide event.

Hosted on the ecologically-run farm Herrmannsdorfer Landwerkstätten, the SFYN meeting will include practical workshops such as a wild herb hike, cooking sessions for making pasta, dumplings, pretzels and butter as well as visits of food production sites.