The most important international Slow Food event dedicated to good, clean and fair food for all returns to Turin, Italy, from October 8–12, 2020 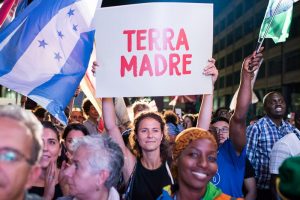 The organization of the 13th edition of Terra Madre Salone del Gusto is already underway, and will be held in Turin, at Lingotto Fiere, from October 8–12, 2020.

The biggest international event dedicated to food, the environment, agriculture and food politics, organized by Slow Food, the Piedmont Region and the City of Turin presents visitors with a new layout of the exhibition space, revolutionizing the experience and multiplying the opportunities for visitors to get to know the people who work every day to shape the future of food in a more environmentally, socially and economically sustainable direction. A future for which Slow Food is calling to action all its activists, youth, producers, cooks, experts, academics, delegates and members who’ve participated in previous editions so they may contribute their ideas and proposals, projects and energy.

For the 2020 edition, Slow Food is designing a new geography based on ecosystems, with all their fragility and the concrete solutions that our network is putting into action around the world to save them. In this historic moment in which nationalism and borders are returning to the mainstream with their walls and barbed wire, the event space and visitor experience will reiterate the need openness, organized according to the environmental characteristics of different areas. By putting the political boundaries of the world map into the background, we give priority to the physical, ecological and cultural spheres, with food as the common thread, from its agricultural production right up to the sharing of cooked meals. There will no longer be the classic division between exhibitors of the Italian and international market; instead, the exhibitors will be grouped according to ecosystems, giving visitors the chance to explore a new way of thinking about the geography of food:

These four macro-areas will bring together delegates and exhibitors from the Alps to the Andes, from the Northern Seas to the great rivers of Europe, from the nascent Slow Food villages to the smart cities, from the Po Valley to the African savanna.

The debate and exchange among the delegates during the event will be enriched by the concurrent Slow Food International Congress, which will also be held at Lingotto Fiere in the same days as Terra Madre.

According to Paolo Di Croce, General Secretary of Slow Food, “the environmental and climate crisis we’re living through, and the great challenge of putting drastic change into effect within the next ten years, as the UN tell us is necessary, together with this historic moment in the life of Slow Food, make the next edition of Terra Madre an extraordinary occasion, perhaps the most important yet celebrated”. 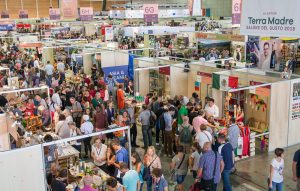 Terra Madre in 2018 welcomed 220,000 visitors, 7000 delegates from 150 countries, 100 exhibitors from 83 countries as well as 150 Slow Food Presidia from across Italy and another 103 Slow Food Presidia from a further 42 countries, 50 Italian institutions and 20 international. There were also 1000 youth delegates, 230 representatives of migrant communities in Italy, 340 representatives of indigenous peoples, 350 teachers and 150 cooks from five continents. That’s without forgetting the 1000 volunteers who make each edition of Terra Madre possible. The event touched the whole region of Piedmont, thanks to the 120 Cities of Terra Madre who hosted over 1600 of the delegates.

Terra Madre is a biennial event, but the workshop of ideas surrounding it is an ongoing process: planning for the 2020 edition started as soon as the 2018 closed, and the activities of the Slow Food network around the world have had a strong impact on this work throughout 2019. The revenue from the ticket office in 2018 (minus the costs of hosting the event) were used to fund the Slow Food network in Africa and to partially cover the cost of delegate participation. The final sum delivered to the Slow Food Foundation for Biodiversity was €250,000 which was used to strengthen our numerous projects across the continent – the Gardens in Africa, Slow Food Presidia, the Ark of Taste, Earth Markets, the Cooks’ Alliance, Slow Food Communities – which together involve some 60,000 people – producers, cooks, agronomists, vets, young activists – in 45 countries. In particular, around 600 new activists were welcomed into the African network in 2019 thanks to 40 new Communities, some of which are focused on strengthening indigenous and youth networks. Around 200 new gardens were created between Uganda, Kenya, South Africa, Burkina Faso, Tunisia, Senegal, Tanzania, Rwanda, Zambia, Benin, Morocco and Malawi. We worked to catalog new products on the Ark of Taste, and a new Earth Market was launched in Tanzania, with work ongoing towards the creation of new markets. Numerous training activities on agroecology were also carried out in all the countries where new gardens were started.

With regard to the sustainability of the event itself, the applied research project Systemic Event Design (SEeD) developed by the University of Gastronomic Sciences (UNISG) was once again implemented for the 2018 edition. Started in 2006, the SEeD project has the objective of defining a new concept of overall event quality, reducing its environmental impact and enhancing its economic and cultural impact on the local area. The initiative is sponsored by the ASviS (the Italian Alliance for Sustainable Development) and focuses on the 17 Sustainable Development Goals of the UN Agenda 2030. This involved the development of 82 concrete actions within the event, thanks to the contribution of 3 Italian universities (UNISG in Pollenzo, the University of Turin and the Polytechnic of Turin), 8 research groups (including the Systemic Approach Foundation and Turismo Torino e Provincia), 7 Sustainability Partners and 65 private companies. Some of the most important results of the project regarded the circular economy, with 81.4% of all trash being recycled (5 times more than the 2006 edition of Terra Madre), in particular used oil (736 liters), which, if not properly disposed of, would have rendered 736 million liters of water undrinkable. There were also 1834 kg of food products recovered and donated to charities and people in need. Among the most significant actions for environmental and social sustainability was the presence of 9 water columns which together delivered 19,000 liters of water, saving 38,000 half-liter plastic bottles, and the baby pit stop space, which was used by over 1800 families.