For the second year in a row, Slow Food Europe joins the European Days of Action for Good Food Good Farming, which during the month of October will take place across Europe. 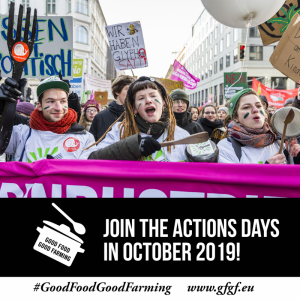 The Good Food Good Farming movement unites more than 300 European organizations who joined forces to demand that decision-makers implement food and farming systems that support small farmers and rural livelihoods, as well as protect the soil, water, ecosystems, and biodiversity.

From Earth Markets to debates, and from the West to the East, Slow Food groups in Europe are loudly joining the European Days of Action for Good Food Good Farming in October. The first Slow Food events will start on the first weekend of October with the three day event in Istria region, Croatia, which will have workshops and debates on sustainable development and the Common Agricultural Policy (CAP) in Europe, an awareness-raising action, organized by the three Baltic States, at the local Earth Market in Straupe, Latvia, and finally with the Slow Food Västnyland event in Fiskars, Finland, which gathers around 8,000 visitors and focuses on the importance of having good, clean and fair food.

Later events will include the transborder “Eat-In” between Germany and the Netherlands, organized by the Slow Food Youth Network to symbolize the cross-border dimension of EU-wide agriculture and food issues, as well as discussions in Slovakia and the Czech Republic about sustainable production, focused on short supply chains, and a protest picnic and discussions on agriculture and its impact on the environment in France. Several events are organized in Italy too.

“We are excited to join the European Days of Action for Good Food Good Farming with a number of different events across Europe, demonstrating both the diversity and the unity of the Slow Food movement. This year is vital for Europe as we are waiting for the CAP reform to be finalized. It is going to determine Europe’s agricultural future, which as of now is set to continue encouraging practices of intensive farming. We believe it is fundamentally important to give a voice to citizens and to make sure that their demands will be heard by EU decision-makers,” says Rachele Lodi, Slow Food’s International Councillor for Europe.

During the events in October, Slow Food groups, along with other organizations involved in the Europe-wide movement, will collect citizens’ messages for better food and farming systems in Europe. The messages in the form of postcards will be delivered to Members of the European Parliament during the final Good Food Good Farming demonstration in Strasbourg, which will take place in front of the Parliament on October 22. As the new Parliament and national governments are expected to make crucial decisions concerning the CAP reform, the Good Food Good Farming movement will use this moment to illustrate the clear demand of citizens that urgent changes be made to Europe’s agricultural system to provide healthy, fair and sustainable food.

The Common Agricultural Policy (CAP) is a European Union policy dedicated to agriculture and rural development. Today the CAP accounts for about 40% of the EU’s budget and remains the EU’s most integrated policy. The Good Food Good Farming movement asks for a fair, green, healthy CAP, which is good for the people and for the planet.

Slow Food is a global network of local communities founded in 1989 to prevent the disappearance of local food cultures and traditions and counteract the rise of fast food culture. Since its founding, Slow Food has grown into a global movement involving millions of people in over 160 countries, working to ensure that everyone has access to good, clean and fair food. Slow Food is the umbrella organization responsible for guiding the entire movement.