After the 24h online conference on June 26, Slow Food launches its climate pledge to demand that food and farming become part of the solution and not a root cause of climate change 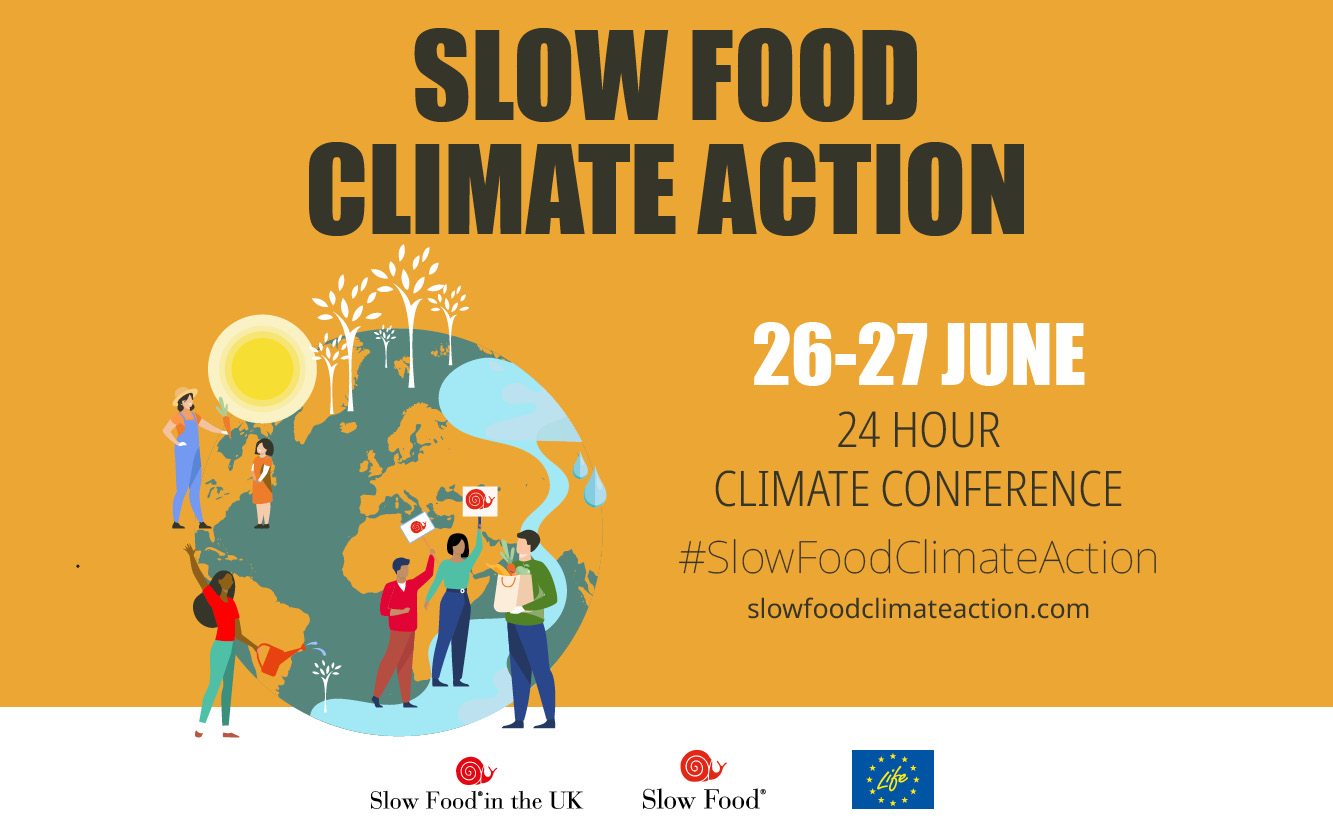 The Slow Food Climate Action, a 24-hour online marathon organized by Slow Food with Slow Food in the UK, involved a large public from across the world, from the USA to Australia and from Europe to South Africa, with more than 8,000 people participating via zoom and social media.

You can find the replays of the sessions on the Slow Food International Facebook page.

After panel discussions and debates, which gave the floor to scientists, citizens, farmers, youth, women, indigenous people and consumers, Slow Food launched the global Slow Food Climate Action Declaration, to reiterate the urgency of the climate crisis and to demand that food and farming become part of the solution and no longer remain the cause of this dangerous issue. Responses to its devastating effects can no longer be postponed and we all have to be part of the solution.

During the closing session, Elena Višnar Malinovská, Head of Unit of European DG CLIMA, stated that, “Globally, food systems are responsible for 60 percent of territorial biodiversity loss, around 24 percent of greenhouse emissions, about a third of degraded soils and full exploitation of at least 90 percent of commercial fish populations. We need to bring industrial farming to an end, to raise less cattle, to promote organic farming, and to take care of water retention in the landscape.”

Shane Holland, executive chairman of Slow Food in the UK, pointed out that, “The COP26 world climate conference in Glasgow next November must give the world effective solutions. Slow Food has decided to run a strong campaign to keep civil society’s attention and expectations high between now and next November. The signing and dissemination of the Slow Food Climate Action Declaration is just the first step, the first act in an involvement that will range from influencing and inspiring changes in the behavior of individual citizens to putting pressure on governments and public institutions at all levels, whether local, regional, national or supranational, to adopt effective and concrete policies against the climate crisis at COP26.”

Marta Messa, director of Slow Food Europe, added that, “Climate change and food are strictly interrelated, since the way we produce, process, distribute and consume food plays a key role. It can either contribute to climate change or help tackle it. Slow Food is a global movement with thousands of communities worldwide who put concrete solutions for sustainable food systems into action in order to help solve the many crises we are facing, as individuals, as communities and as a society.”

The next event for the Slow Food Climate Action will be in Milan (Italy) on July 22nd at the G20 Youth Summit, the official engagement group of young leaders representing the G7 and G20 countries. Slow Food will participate in the Coffee Day panel discussion on Reflections, best practices and models in the coffee value chain. Emanuele Dughera, spokesperson of the Slow Food Coffee Coalition, will explain why coffee, the second most traded commodity in the world, plays an important role in climate impact.

While coffee has so far played a relatively small role in global deforestation (compared to commodities such as palm oil, soy or extensive livestock farming), it is assumed that climate change will gradually push production into new geographical areas, often at higher altitudes, thus threatening some of our planet’s last intact forests and key biodiversity conservation areas. By 2050, global demand might triple, which would mean exploiting an additional 10-20 million hectares of land – a devastating scenario for local communities, both environmentally and socially.