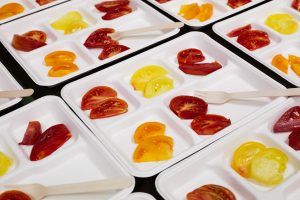 A weekend dedicated to highlighting and making known natural and cultivated biodiversity through the senses, art and contact with nature with a program of activities that included a Tomato Tasting, a Cyanotype Workshop with plants Wildlands, a LandArt Workshop and a Biodiversity Bathing, in which more than 30 people, between 3 and 70 years old, participated and enjoyed themselves.

La Tomatada, which has been held since 2004, is a tasting of traditional tomato varieties that Albar Association grows in the Castielfabib garden and that it conserves in its seed bank. With this activity, the participants discovered the value and potential of these varieties, they tasted and evaluated them in a tasting card and connected with their flavors and origins.

In addition to sensitizing participants about cultivated diversity, the association also wanted to value natural biodiversity through artistic experience (Cyanotype and LandArt Workshops) and conscious observation of the environment (Biodiversity Bathing). These activities were carried out on a plot that has a growing area and a riverside forest area, which Albar Association has recovered thanks to the support of Slow Food and with the financing of the European LIFE program.

Thus, in the cyanotype workshop, which is an old photographic printing process that botanist Anna Atkins put into practice for the documentation of plants, the participants worked with wild species that they found in the plot, some of them with gastronomic use and that had been previously identified and cataloged by Albar Association.

With the LandArt workshop we had the opportunity to perceive the artistic value of biodiversity, combining natural elements and the creativity of the participants who made various artistic compositions that were integrated with the space. A family and collaborative activity that ended with the presentation and explanation of each “work” by each team.

The activity that closed the weekend was the Biodiversity Bathing: a sensory experience guided by intuition and conscious perception of the environment, with the sole objective of experiencing nature and its richness without a predetermined direction. The participants became aware of the therapeutic value that forest bathing have for people (among others, the reduction of stress, the regulation of blood pressure and an improvement in mood) thanks to the biodiversity and plant richness of these spaces and they also did some breathing and relaxation exercises. This experience, in addition, will be integrated into the writing, which is being prepared by Albar Association, of a Biodiversity Bathing guide that allows it to be carried out in any natural environment.

The artistic workshops were led by the transdisciplinary artist Sandra Navarro, and the Biodiversity Bathing was guided by Christian Gilaberte (Intranatura) and are part of the project “Traditional Agroforestry Systems for the recovery of Local Biodiversity”, which has been selected by Slow Food and funded by the LIFE Program of the European Union.