Archive » Petrini to G7 ministers: ‘We must set up a Food Ministry and activate effective international cooperation policies.’

What follows is the Slow Food President’s speech to the G7 meeting of Agricultural Ministers in Bergamo, Italy, on October 15, 2017.

Good morning to everyone and thank you for the invitation.

It is an honor for me to speak at this important meeting and I hope my modest contribution may prove useful.

Agriculture has and will play a decisive role in the future of humanity: in its capacity to address the challenges of the years to come and ensure life—worthy or otherwise—to all its members, and in its prospects of either living in harmony with the environment or of destroying our common home.

I wish to begin by pointing out what, to my mind, will be one of the main trends in the future that awaits us: namely the progressive movement of large masses of people from the countryside to towns and cities, a phenomenon that has been underway for years. This urban migration is affecting every area of the world and involving mostly young people, now increasingly less likely to conceive of a rural life project. This is a huge problem, both from the point of view of agricultural production and from that of social sustainability in urban areas, where veritable food deserts risk being created and, in turn, transformed into ghettoes.

The phenomenon has two main causes:

in the last few years food has lost value and the economic rewards of country dwellers are being reduced to a bare minimum, meaning that the job of farming is losing its appeal and social status; the quality of life in rural areas is no longer in keeping with the expectations and perspectives of the young people of the 21st century, who have grown up in a globalized context, connected with the world and with a wide range of opportunities and prospects before them.

To address these two factors fully and hence reverse the trend, we need to engage in the building of a new form of ruralism. On the one hand, this must respect the peculiarities of each local context, on the other it must be in line with modernity, which cannot and must not be arrested, still less denied—if anything, we can try to control it.

Hence the need to come up with transversal international responses, partly due to the fact that, in recent years, we have witnessed a progressive and apparently unstoppable concentration of power in the food supply chain, increasingly cornered by a handful of transnational subjects that often possess the wherewithal to get round even the interventions of single governments. New food policies—a term I prefer to ‘agriculture policies’—have to be harmonized and designed to support local economies that, up against the great ‘potentates,’ risk being fragile and lacking tools to work with. The time is now ripe to press the governments represented here to accord full political dignity to the food question and, as a consequence, to create a specific food ministry to govern it in all its complexity. Today in five of the countries represented at this G7 meeting, the word ‘food’ appears beside the word ‘agriculture’ in the name of the ministry responsible (only in Germany does ‘food’ precede ‘agriculture’). But instead of being a mere appendix to a productive activity, food now needs to be given a new more central role. It cannot be confined solely to the ambit of production: on the contrary, it also has repercussions and a bearing on the economy, health, culture and education. The limits within which your ministries have to work prevent them from possesing the necessary tools to implement the comprehensive, transversal action that food demands, yet, at the same time, it is of course on agriculture that this new administrative paradigm can and must be based.

It is politics, in fact, that can make a real difference. If it accepts that, as FAO itself points out in its most recent report, true wealth also lies in the multitude of small- and medium-scale farms that ensure food security in most of the world, then the aim must be to decolonize our thinking and see these enterprises not as obsolete forms of agriculture but, if anything, as an alternative model of modernity centered round respect for the environment, the dignity of communities and a decent future for all.

The concentration and standardization of production are a factor in transforming food into a delocalized global commodity, thereby causing tremendous harm to the environment and the dumping of local products. In this way, we are destroying opportunities for young people to play an active, rewarding role on their own home turf. If this is true of every part of the world— 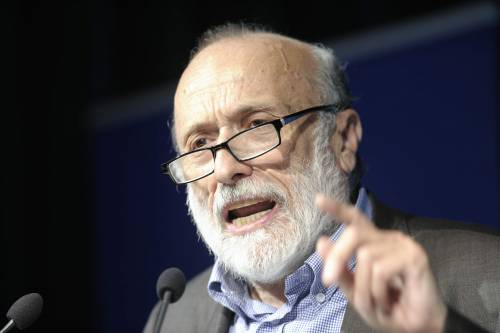 including the countries you represent here—then these criticalities are amplified and take on dramatic proportions in areas of the planet where malnutrition and hunger are still rife (according to FAO figures, the number of people affected is just under 815 million). It is self-evident therefore that government aid and development support policies cannot ignore this baseline situation. Otherwise, implementing any action, however effective it may appear, will be a bit like using a cork to plug a hole in a ship.

It is possible to restore value to food, and the aim is a noble one that will allow anyone who produces well to live well.

Far from being throwbacks yearning for a glorious past that never existed, if they are guaranteed a role in a world network and given the chance to put new high-tech tools at the service of agriculture of a high standard, small and medium local communities can become a successful new paradigm of local development—connected with the world, socially active and economically worthwhile. It is my hope that politics, represented here at its highest levels, will protect and defend this multitude of local communities and that it will do so by adopting an inclusive approach, not limited to a single country but promoting a new logic of fraternal collaboration and international cooperation as an alternative to a global system that, at present, is killing them.

The concept of free exchange in the classical sense, as embodied in the major international treaties, often fails to take into account the fragility of local systems that, insofar as they are devoid of the economic and legal tools to compete on a large scale, deserve to be treated with care and devotion. The question we have to ask ourselves is: can there be a concept of free exchange applicable elastically in such a way as to avoid mortifying local economies? For exchange to be really free, isn’t it necessary for all those involved to have equal opportunities to start with? And who or what if not politics can ensure these equal opportunities?

In conclusion, I believe that the task ahead of us in the years to come is a complex but, at the same time, exciting one. Yet it will be fruitful only if the economies of the First World create the conditions to—as I like to see it—give something back to developing countries. It would be wrong to forget, in fact, that the vast majority of these countries—maybe all of them—still bear the scars of centuries of colonialism, which, once the sun had set on it, was replaced first by exploitative neocolonialism, then by a predatory global economy. Today, moreover, we are witnessing the most glaring, dramatically ironic of contradictions whereby the people suffering the worst consequences of climate change are precisely the ones who bear no blame whatsoever for the deterioration of natural systems. It is the job of international meetings like this one to make an effort to redress the balance.

Even if we are not personally responsible for these processes, we as inhabitants and representatives of the so-called Global North cannot help feeling their moral weight and burden.

Public policy in any ambit—all the more so in that of food—must be perfectly clear about this baseline scenario. Partly because, whether we like it or not, there can be no doubt that the food question has a strong and direct connection with our personal lives and our everyday activities. Suffice it to think of the migration triggered by conflicts and violence that are often the result of the fight for control over increasingly sparse water and food resources. Rhetoric aside, to address these deep-rooted problems is to build a true policy of peace. This is not an act of charity or altruism: the fact is that if we are effectively capable of building a new form of coexistence based on reciprocity and solidarity, our own communities will enjoy better lives too.