Our network » Slow Food Communities » FAQs: the communities and the new model

FAQs: the communities and the new model

Here you can find information and explanations about the communities and the new organizational model. 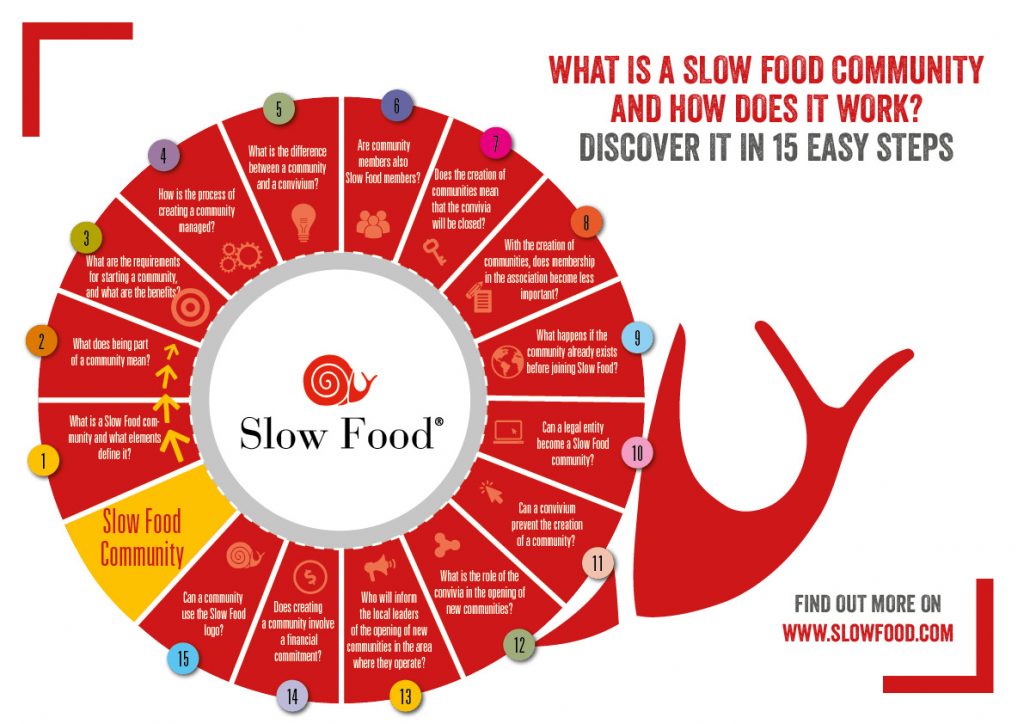 INTRODUCTION – Why have you chosen to use the community model?

The need for Slow Food to make radical changes was confirmed at the International Congress in Chengdu. Our movement has spread and taken root around the globe, adapting to local contexts and able to interpret and experience diversity with full dignity in all regions. The need for change has become clear in recent years. Slow Food is neither a classic association nor an NGO, but a movement that works as a network and whose greatest strength lies in this network. This is why the Congress in Chengdu chose the organizational model of the community. The term “community” is not new in the history of Slow Food. The word derives from the Latin communitas, and refers to having things in common, sharing things: experiences, problems, resources, knowledge, but also a way of positioning oneself and interconnecting. At the center of the idea of community is the common good, which in our case is linked to food, to the environment, to social relationships, to spirituality. And its foundational element is emotional security.

1. What is a Slow Food community and what elements define it?

A Slow Food community is a group of people who share the values of the international Slow Food movement (reasserted in the Chengdu Declaration), starting from the core principle that everyone has a right to good, clean and fair food and that Slow Food will not give up the fight until every last person on the planet has access to it. Made up of at least 10 people (approximately—the exact number will vary depending on the area), it represents the basic nucleus of the Slow Food network, similar to the convivia. A community is formed for a specific purpose (for example to protect and promote a local food, to create a food garden, to launch an education project, etc.) linked to Slow Food’s general aims, and works in a specific area, in dialogue with the rest of the local and regional network. At the same time, it undertakes to make the international network stronger by supporting it in various ways.

2. What does being part of a community mean?

Belonging to a community means sharing one’s commitment with other people who believe that Slow Food can contribute to changing the world, starting from the way in which food is produced and consumed. It means having a common objective and working together to realize it, organizing activities of all kinds (such as events, debates, projects with producers, etc.). It means contributing to the development and spread of the ideas of the international Slow Food movement, and at the same time being a spokesperson for the movement, embracing and supporting a food system in harmony with human dignity, social justice, and respect for the environment and all living beings. It means making a commitment in one’s everyday life to constructing a society based on knowledge, relationships, openness, inclusion, emotional security, and participation.

3. What are the requirements for starting a community, and what are the benefits?

Everyone who identifies with Slow Food’s values and wants to work personally to spread them and put them into practice can belong to a community. All that is needed to start a community is to fill out a Slow Food Community Founding Declaration. Once the community has been officially recognized, its members will become activists in the movement. They can use the community logo for their activities and represent Slow Food in regards to their own objective. Those who form a community do not do so to gain benefits or have some kind of return, though these can exist and be very motivating. Someone who forms a community does it to make a contribution to a common cause, to give something, to support the movement’s ambition to construct a world in which everyone has access to good, clean and fair food.

4.How is the process of creating a community managed?

The people interested in starting a community complete a Slow Food Community Founding Declaration and send it to the relevant area coordinator at the Slow Food international headquarters. The coordinator will ensure the Declaration is properly completed and then submit it to the Slow Food Executive Committee, the body that approves the recognition of communities and grants the use of the Slow Food name and logo. The Executive Committee can delegate the authority to recognize communities to Slow Food’s national and regional associations, where they exist. The Slow Food Executive Committee (or the national or regional association, where authorized) can decide not to recognize the community or revoke recognition in case of proven violation of the Slow Food International Statute, the Code of Use for Slow Food Trademarks, and the Fundraising Guidelines or any other official Slow Food operating document, or with just cause. Once recognized, the community will be considered active until the next Slow Food International Congress, in 2020, when it will be invited to renew its adhesion to the movement.

5. What is the difference between a community and a convivium?

A convivium is an organizational nucleus of Slow Food members, in other words people who individually pay an annual membership fee to the association and choose to actively participate in association life, including through governing bodies at various organizational levels of the association, as specified by the statutes and national law.
A convivium is always based in a specific area and has a series of obligations in that area that go beyond the pursuit of a single objective. It represents Slow Food to local authorities, institutions, or associations, and must accept any individual who wants to become a Slow Food member.
A community is an organizational nucleus of people who do not have to pay an individual annual fee to be part of the community and who do not receive a membership card. The community is based on its own objective, and limits itself to representing itself and its objective. It is not obliged to accept people who are external to the community.
From now on, based on the decisions taken in Chengdu, convivia and communities will have equal dignity and the right to speak within Slow Food. Slow Food’s policies will be developed with equal attention and listening equally to both structures.
All the local nodes in the network must dialogue with the other nodes in their area. The founding spirit of Slow Food and the Chengdu decisions do not allow conflict of any kind between groups acting in the same area, even if they have different characteristics. Dialogue, collaboration, and engagement do not represent a limitation on the autonomy of convivia and communities in regards to their prerogatives, as specified in the Slow Food Statues and constitutive documents.

Not automatically. By signing the foundational declaration of a community, individuals join a group that is fully part of Slow Food, but its members are only Slow Food members if they choose to join the association as individuals.

7. Does the creation of communities mean that the convivia will be closed?

No. Existing convivia will continue their activities as they have in the past, at least until the next Slow Food International Congress in 2020. There will be a gradual transition toward a new form of organization for Slow Food at an international level, based on the experiences accrued over these 2 years.

8. With the creation of communities, does membership in the association become less important?

No. Association membership remains an evolved and effective way of allowing an individual to play a direct role in the life of Slow Food. It will be especially useful to maintain this mode of participation in places and contexts where it has proved particularly effective.

9. What happens if the community already exists before joining Slow Food?

This will likely be a common scenario. Already-existing communities, formed in associations or other bodies or even informally, will decide to also become Slow Food communities. Nothing changes: This group must also follow the procedure set out in the Slow Food Community Foundational Declaration, and it will still be possible to talk of the creation or founding of a community in the sense that the community will now be a Slow Food community.

10. Can a legal entity become a Slow Food community?

11. Can a convivium prevent the creation of a community?

No, as indicated in the Operational Guideline documents approved by the delegates at the International Congress in Chengdu, no node of the network, whether convivium or community, has the right to veto the creation of another node. If a node in the network believes that a community should not be recognized for one of the previously mentioned reasons (proven violation of the content of the Slow Food Community Foundational Declaration, the Slow Food International Statute, the Code of Use for Slow Food Trademarks, the Fundraising Guidelines, or any other official Slow Food operating documents or for just cause), it should communicate this to the Slow Food Executive Committee (or national or regional association, where delegated) which will make the final decision.

12. What is the role of the convivia in the opening of new communities?

It is essential that the first communities are created on the initiative of the already-existing local network. It will be the task primarily of the convivia to identify and encourage the formation of new communities in their local areas. This can take place outside or inside already-existing networks and contacts (Terra Madre food communities, Presidia, Earth Markets, food gardens, etc.). It is equally important that the convivia play an active role in relationships with the communities that will be started in their local areas, even when they have not arisen out of their own direct initiative. The convivia can play a fundamental role in the effective establishment of the community model in the future organization of Slow Food.

13. Who will inform the local leaders (convivium leaders and committees, community spokespeople) of the opening of new communities in the area where they operate?

When a new community is created, its contact details and objective will be published on the Slow Food website in the section dedicated to the network. Additionally, the area coordinator in the Slow Food headquarters will send a communication to the local leaders and put them in contact with the new node in the network.

14. Does creating a community involve a financial commitment?

No. A specific commitment of support for the international movement is essential but the type of support can vary depending on cultural, social, political, and economic contexts and will be decided based on an agreement between the community and the Executive Committee (or other delegated associations). There will be some communities that donate their time, others that contribute significant funds, but the main point will be to support the international projects that are an inextricable part of our identity, such as the Ark of Taste, the Presidia, the food gardens, Terra Madre, and the campaigns. A minimum amount will be identified for each country, to be used as a base indication for establishing contribution levels.

15. Can a community use the Slow Food logo?

Every community will have the right to use the logo exclusively for activities linked to the objective and projects for which the community was founded. The use of the logo will be regulated by the Code of Use and the Fundraising Guidelines. Use of the logo on food or other products is not allowed. The logo will be created and supplied by Slow Food. No community can create its own logo or modify the one supplied by Slow Food.