IFAD & Slow Food: a Project Empowering Indigenous Youth and Their Communities To Defend And Promote Their Food Heritage 2017-2020 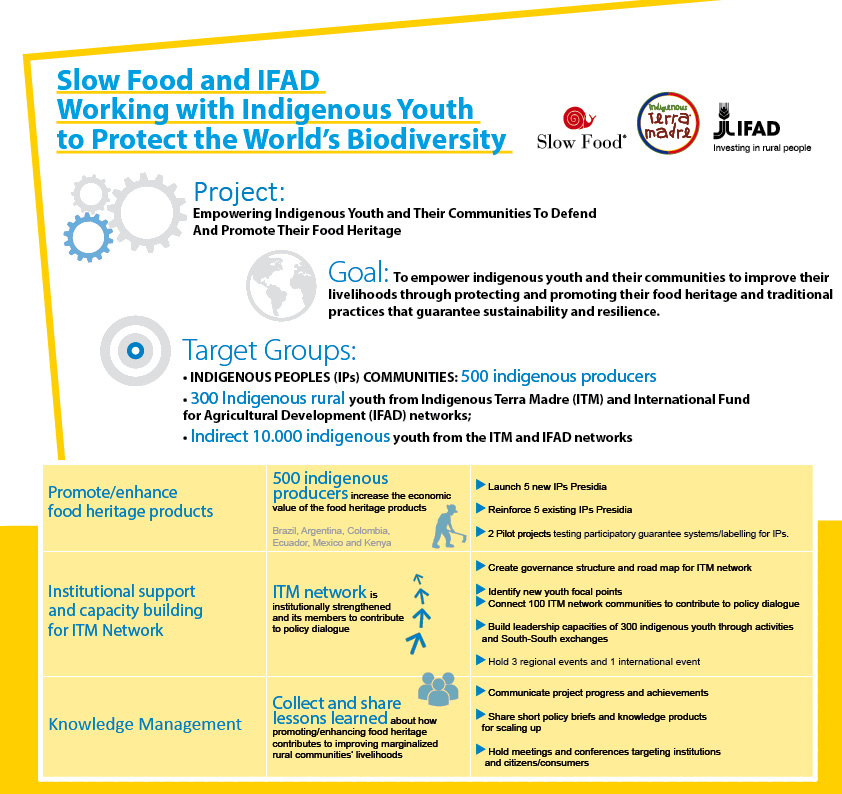 The ongoing IFAD and Slow Food project has the goal of empowering indigenous communities and youth, and improving the livelihoods of beneficiaries by protecting and promoting their food heritage and upholding the sustainability and resilience of their practices. This will be done by increasing the economic value of the food heritage products, and by strengthening the global network called “Indigenous Terra Madre”, increasing the number of members who contribute to policy decisions. The project aims to collect and broadly disseminate the knowledge and evidence-based learning on how these two goals can be achieved.

One decade ago, the International Fund for Agricultural Development (IFAD) and Slow Food started a partnership, working together with indigenous peoples, to develop innovative projects in several countries, and organizing two major events in 2015: Indigenous Terra Madre (in India), and the youth network’s “We Feed The Plannet” (in Milan). The results of these events were discussed by the indigenous network at Terra Madre 2016, highlighting the importance of pressing on indigenous food heritage as a means of sustainably strengthening local economy, reinforcing cultural identity, creating opportunities for youth, and connecting with wider audiences and raising awareness on major issues such as land grabbing or climate change effects.

IFAD and Slow Food accepted the challenge and together developed a project that aims to “Empower Indigenous Youth and Their Communities To Defend And Promote Their Food Heritage”. 300 indigenous youth will be involved and more that 500 indigenous producers from the Slow Food Presidia and IFAD networks. The main countries involved are Argentina, Brazil, Colombia, Ecuador, Mexico and Kenya. Five existing indigenous Presidia will be strengthened, and five new Presidia will be created. Of these ten Presidia, two will be selected to pilot an indigenous-led system, designed to improve and increase the commercialization of the products, while exploring new ways of labeling or participatory guarantee systems.

Furthermore, the project aims to strengthen and consolidate the work with indigenous peoples’ that IFAD and Slow Food have been developing in the Indigenous Terra Madre (ITM) network. More communities stand to officially join the movement, and a governance system will be created to support the process of founding an indigenous-led movement. The governance will decide the next steps, drawing out a road map, and the main topics to be addressed so that indigenous food systems are acknowledged and represented in the global food debate. To ensure the ITM network’s sustainability, it is essential that indigenous youth actively participate in the governing bodies, and therefore it is fundamental to work on their capacity building. As such, the project will develop and deliver training modules, meetings and South-South exchanges.

During the project, key messages and lessons learnt will be collected and disseminated to encourage the adoption of successful models into development programmes and international policy frameworks, as actions to scale up and out, and to ITM network members who might be inspired to act. The public at large will likewise be addressed, as consumers, to influence their daily food purchases and decisions.