Archive » Our Agriculture Needs a Detox!

The Slow Food Network Mobilizes Against Pesticides Across Europe

Given the attempts by several Member States and European groups to weaken or delay the European Commission’s proposal for a Sustainable Use of Plant Protection Products Regulation (SUR), it is crucial for policymakers to hear our calls for an ambitious European target to reduce the use of pesticides by 80% by 2030 and a complete phase-out by 2035, and to support farmers in their uptake of agroecological farming methods.

During the month of October, Slow Food joined the 2022 European Days of Action for “Good Food Good Farming” that were dedicated to raising awareness about pesticides: several local Slow Food groups joined other European organizations and organized events across Europe, from France and the Netherlands to Croatia and Greece, to promote agrobiodiversity and raise awareness about the need to shift to a pesticide-free agriculture.

Marta Messa, Secretary General of Slow Food, says: “Whilst there are many who are attempting to squash any attempt to set in motion a transition away from synthetic pesticides, communities on the ground are organizing and demonstrating concrete ways to produce food in a nature-friendly way. It’s time for our EU and national policymakers to listen and take bold action!”

Here is a recap of the most important events:

On October 14, Slow Food Turda organized a Disco Soup (an action that take the shape of a party during which food waste is turned into tasty soup.) dedicated to youth in Cluj to celebrate World Food Day, and invited producers, consumers, and local decision makers to exchange about the dangers of pesticides and the alternatives that are available to farmers.

A gathering was organized on October 16 by a group of organic winegrowers participating in the “DEPHY” initiative in the Côte Chalonnaise region of Burgundy », of which several French Slow Food producers are members. The DEPHY initiative aims to develop and test methods to reduce the use of synthetic inputs.  Exchanges took place about how winegrowers can lessen the use of pesticide and develop agroecological techniques in wine production.

The Slow Food Youth Network in Hamburg organized a visit for the general public at the Gut Wilkenshoff organic farm. The goal of the visit was to raise awareness about agroecological pesticide-free farming, fair prices for small-scale farmers and the pleasure of planting and eating locally and seasonally.

Slow Food Netherlands will set up a demonstration on November 5 to officially present their 8 political recommendations for sustainable local food policies, ahead of the provincial elections that will happen at the beginning of 2023. Slow Food Netherlands calls on all parties to become more ambitious when it comes to the theme of food and call on municipalities to play a bigger role in ensuring healthy, sustainable, and local food for all, as well as bringing back the visibility of food throughout cities.

Slow Food communities teamed up with the “Fridays for Future Stockholm” group to carry out a protest outside the Swedish parliament on October 21 calling for less pesticides in agriculture and support to farmers in their transition to agroecology, followed by a picnic with regionally and sustainably produced food, as well as exchanges with passersby to raise awareness about pesticides, pollinators and their demands for a new food system. 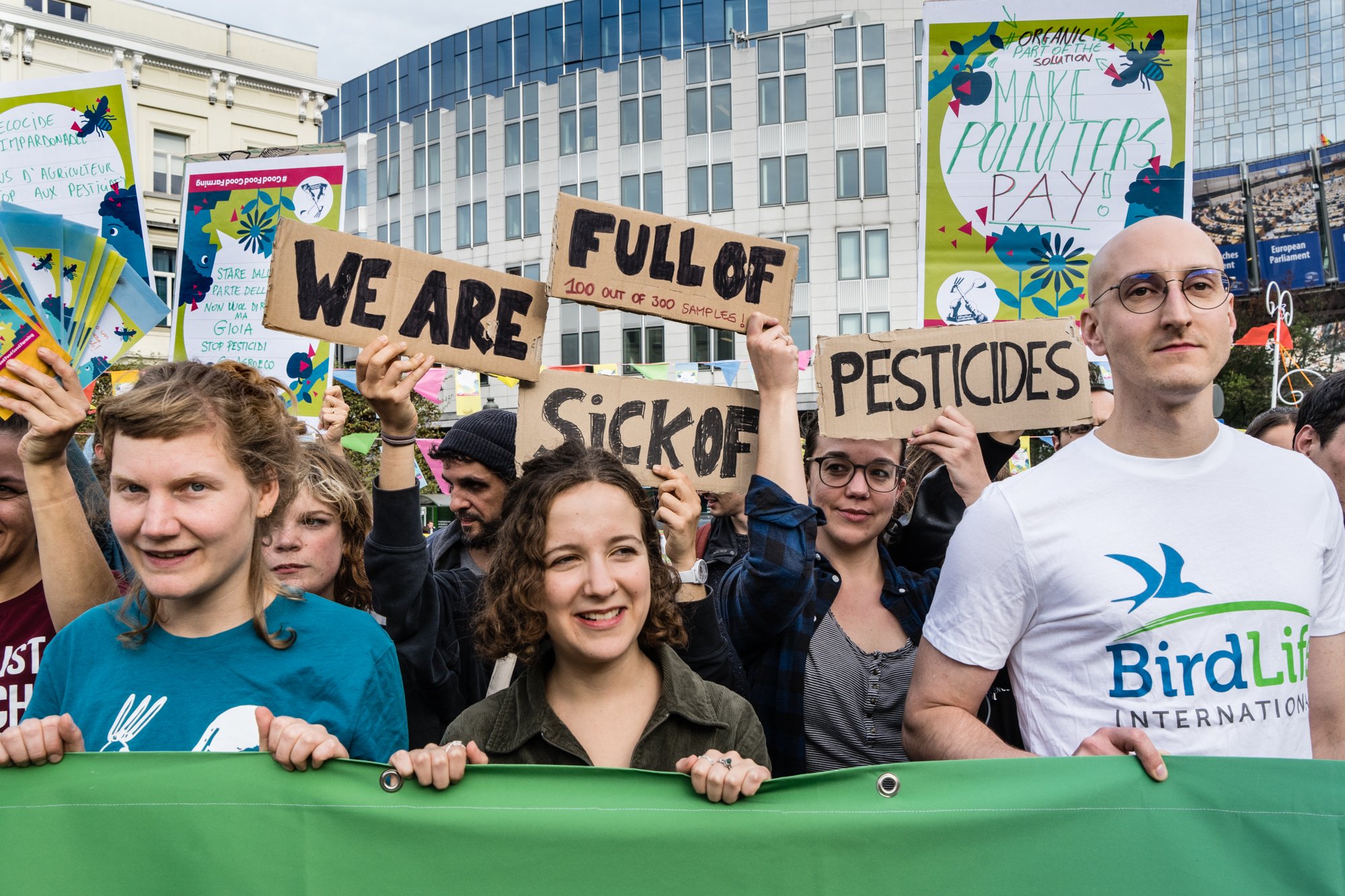 The Good Food Good Farming month reached its peak with a protest in Brussels in front of the European Parliament on October 27, where many organizations gathered to call on the EU to maintain strong pesticide reduction targets in its regulation on the sustainable use of pesticides (SUR). Pesticides are a major cause of biodiversity loss and a health risk for people, especially those working and living around farms, as demonstrated by a recent report launched by the Good Food Good Farming Coalition, of which Slow Food is part of the Steering Committee.

The “Pesticide CheckUp” report is a citizens-science action for which 300 people from across Europe sent in hair samples to get lab tested for 30 different pesticides currently authorized in the EU. It finds that pesticide residues were found in the hair of nearly every third person tested (29%; 87 of the 300 participants). Findings furthermore suggest that pesticide residues can be more frequently detected in the hair of farmers and agricultural workers (43,5%), illustrating that farm workers are the ones most exposed to pesticides and therefore most vulnerable to health hazards. 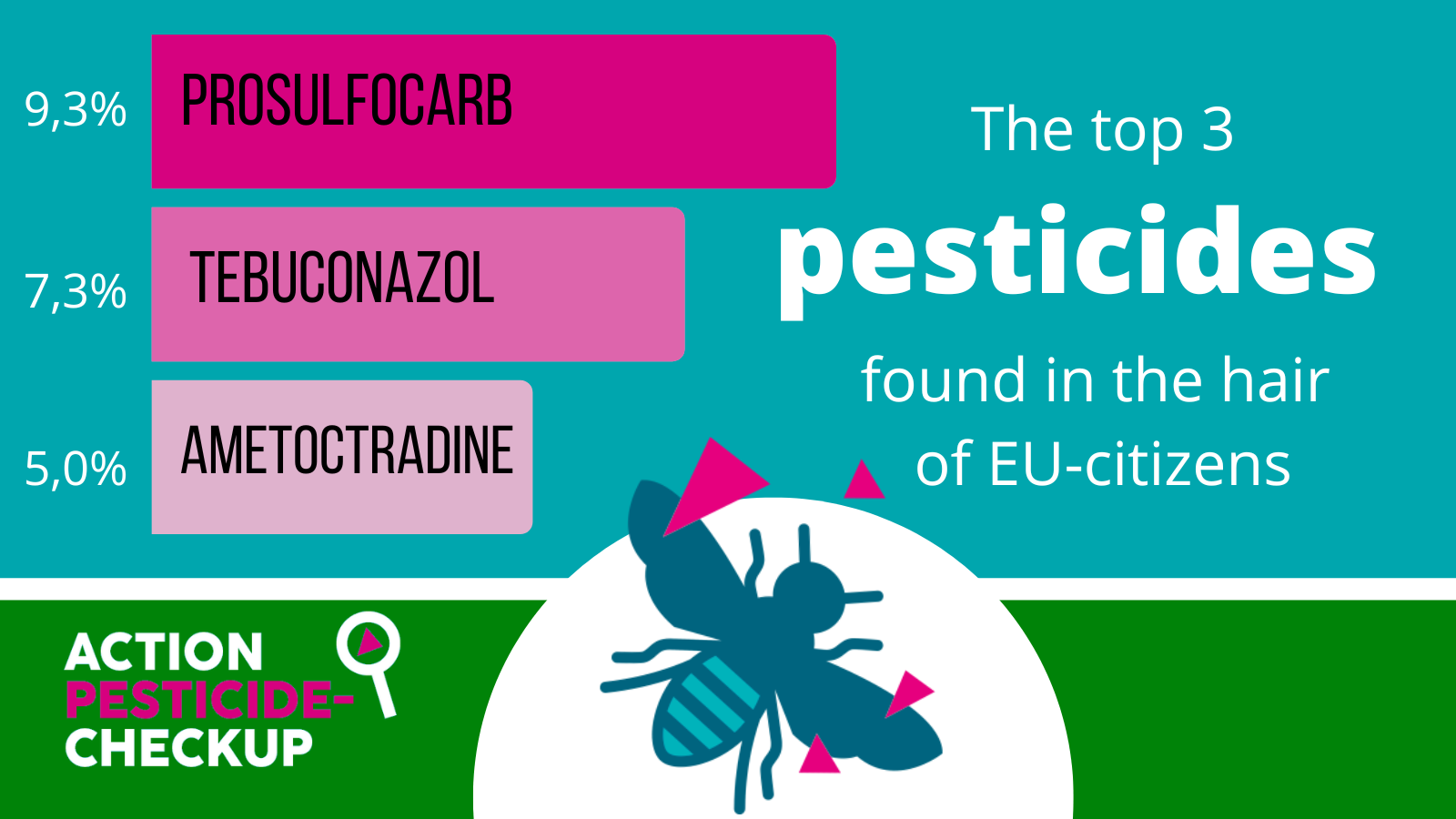 Unlike what agri-food corporations want us to believe, alternatives to intensive, polluting and pesticide-hungry monocultures exist, and they work. Right now, the agricultural system poses many threats to European citizens’ health, who are in contact with chemicals even without wanting it and especially without choosing it. This is unacceptable, and many European citizens want this to change, as clearly shown by the 1.05 million European citizens who signed the European Citizens Initiative (ECI) “Save Bees and Farmers” which was officially validated by the European Commission earlier this month.

On 26 October, Commissioner Kyriakides in charge of Health and Food Safety stated that the situation caused by the invasion of Ukraine and the COVID crisis were not reasons for delaying the transition to sustainable food systems – on the contrary, we should accelerate it. Slow Food could not agree more and calls on all European decision makers to commit to the Farm to Fork Strategy and take bold action to limit the use of pesticides as much as possible, starting with abolishing their preventive use, in farming but also in gardening and forestry.

Integrated Pest Management practices must become mandatory for farmers, and EU policies must support the transition towards agroecology and encourage farm management systems that aim to re-establish the symbiosis between nature and agriculture.