Wildfires in Sardinia have destroyed 20,000 hectares of woods, pastures, olive groves and vineyards. The root causes of these devastating infernos can be found in the abandonment of the countryside, short-sighted policies and the climate crisis, which we continue to ignore. We hear from the Slow Food network about the impact.

“It’s the third time that I’ve seen my land burnt, but never before like this. The ground was on fire beneath our feet.” Giampaolo Mura, a Slow Food Presidium member, farms Sardo Modicana cattle in Santu Lussurgiu. Giampaolo saw the fire start in what used to be a garden of Eden, Montiferru, a part of Sardinia the links the island’s heart with the coast. A patchwork of pastures and oak and holm oak woods that used to stretch, green and lush, down to the edge of the sea.
“Nobody is hurt, nobody has died, we can’t complain,” is the mantra that Giampaolo keeps repeating. He managed to save some of his pastures and livestock by containing the fire with water, but only by risking his life. “As soon as I saw the flames rising I took the cattle to the stables. I closed everything, soaked all the paths and took care of the barn. My farm was tidy and in order and I wasn’t too worried. But the fire came all the same, there was too much wind. As my father had taught me, I got inside the stables with the animals, ready to intervene every time a spark came through the cracks.” 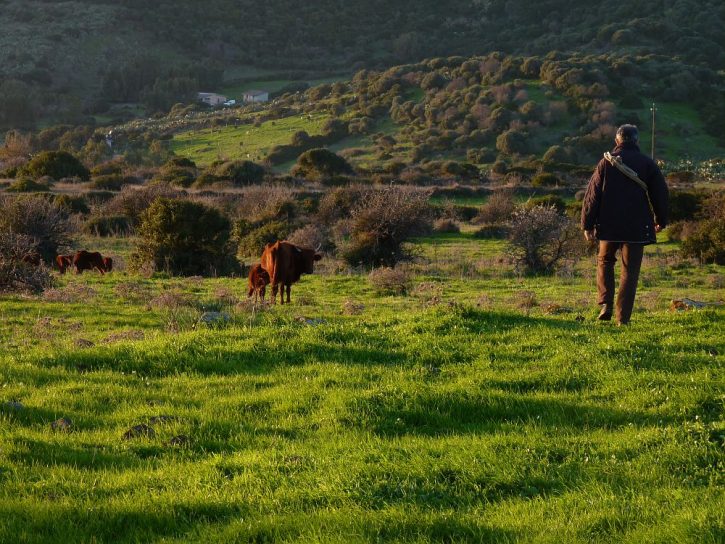 It’s not the first time that Giampaolo has seen Montiferru burning: “The woods had re-established after the 1994 fire, but now it will take as many years again. The pastures will need to be sown, tended. We’re hoping for rain. For now everything is dust and ashes.” And Giampaolo has an appeal to make: “I haven’t seen one helicopter, one fire-fighting plane, nothing at all coming to put out the flames on my farm. Anti-fire measures need to be strengthened. And we need legislation that really understands the morphology and the needs of the local area. The mountains were inhabited, cows would pass through, with a path you could enter in the woods. But without paths not even today’s vehicles can get in, without a path where can you go?”

The result is clear: 20,000 hectares of forests, pastures, farms, vineyards and ancient olive groves burned for days. The fire was out of control, fuelled by the scirocco wind, the torrid heat and the loss of that equilibrium between herders and the environment that used to ensure a control and tidiness that could have limited the damage. “The depopulation of the inland areas like Montiferru has led to a state of abandonment of the woods too. The natural heritage of the island has been anthropized since the Neolithic period. But now we’re seeing the land turning wild again,” explains Nicolò Migheli, a sociologist originally from Montiferru and an expert in rural development and organizational behavior.

During those days, the smoke could be smelled for miles in Sardinia. And where the smoke didn’t reach, the colour of the sky still darkened the soul. You soon learn what that cerulean-blue sky means, free of clouds but full of haze, the air thick with a penetrating heat that carries one terrible message: fire.

But this time it felt different. Even more terrible, if such a thing was possible. The news from around the world of wildfires in Siberia, in California. The hectares turned to smoke in Calabria, in Sicily. The floods in Germany, the terrifying temperatures in Canada. It all left no doubt. We have little time left, how much longer do we need to wait before acting? 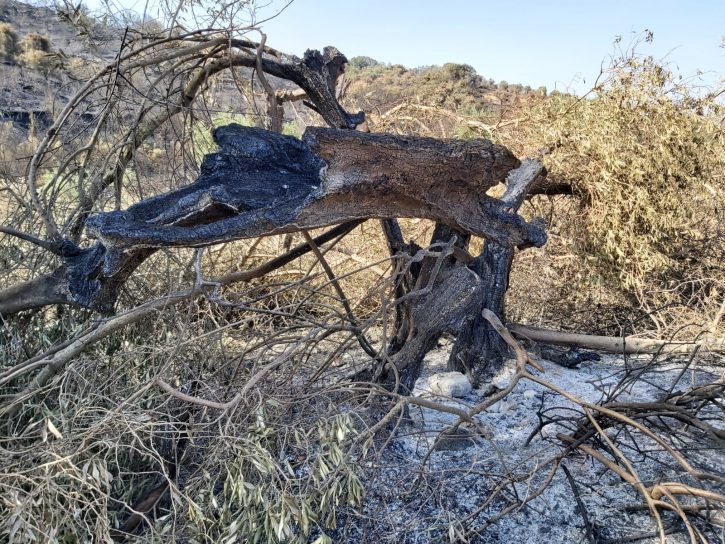 In the meantime, we got in touch with the Slow Food Presidium producers close to the affected area, and luckily the damage, if still severe, has mostly been contained. The network of Presidia has also been responsible for the first initiative of solidarity to support the affected producers. Nicola Solinas, an agronomist, owner of the Masoni Becciu farm in Villacidro and producer from the Italian Extra-Virgin Olive Oil Presidium, has had the idea of organizing a donation of olive trees to those whose land has been devastated by fire. 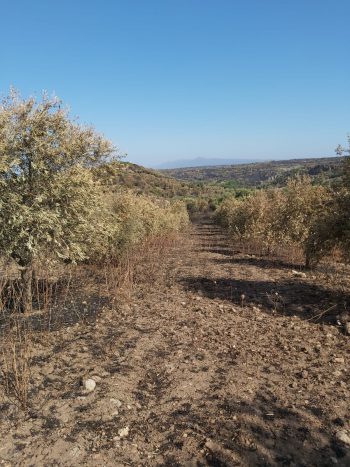 Nicola is mobilizing trade associations, municipalities and regional authorities who are working on evaluating the damage and surveying the farms with the aim of supporting those struggling by providing them with olive trees of the native Bosana variety. “We are planning to organize some days in November to plant the trees. Most olive groves are not irrigated and the reconstruction of an olive grove involves enormous costs due to the transport of water. November is the best month for the plants to take root,” explains Nicola. “Just through word of mouth we’ve already bought 4,000 plants.”

We look forward to hearing more from this informal initiative, and Slow Food Italy’s governing council has released a statement: “Slow Food is a community and being a community means that we feel like fellow travelers with a shared destiny. When part of this community suffers, it is our duty to act. What is happening in Sardinia touches each of us and involves all of Slow Food. This is why we have decided to launch our own initiative to support the ‘reconstruction’ after the devastation of the fires. Nicola Solinas immediately rolled up his sleeves and didn’t wait a minute to get started. This is why Slow Food is at his side. While Nicola is working with the Slow Olive network in Sardinia to help the producers affected by the fire, we will be donating to his project the entire proceeds from the sale of Slow Food Italy’s guide to extra-virgin olive oils, which we will be selling through our convivia and communities. It’s just a drop in the ocean, a small gesture, but a gesture that we hope will contribute to sowing the future.”

The plan is for this to be the first initiative of many to help Sardinia’s fire-struck producers get back on their feet.