Archive » From Nose to Tail

Encouraging the use of alternative and lesser-known cuts of meat is one of the many suggestions and tips that Slow Food offers through the Slow Meat campaign. When beef is only cut for fillets and tenderloin, only 40 kilos of the animal are actually being used. Other unsold cuts are often discarded, contributing to increasing levels of food waste. Learning to appreciate the whole animal, from ‘nose to tail’, can instead help to reduce this waste, rediscovering interesting local recipes and giving full value to the work of farmers and butchers. All while saving money! Here are a few little suggestions:

Beef is a good meat to choose for those approaching alternative cuts for the first time, being both particularly tender and delicate in taste, and traditional English and German oxtail soups recipes are a good way to start. The tail is one of the tastiest parts of the animals and is suited to many recipes, such as this traditional English soup, which is a nutritious, one-course meal, both easy to prepare and not excessively calorific.

Offal and giblets are the most commonly known off-cuts, despite often being overlooked in the kitchen: they are nutritionally rich in vitamins, protein, glycogen, fats and mineral salts, but also contain high levels of cholesterol and fatty acids. Rabbit offal provides interesting ingredients for delicious liver patés or ragù. Entrails can also be grilled or pan-fried, but it is important not to overcook them, as they will otherwise become rubbery, and they must be fresh when bought. Combs and wattles are the most common cuts in Chicken offal. A classic text of Italian cuisine, dating back to the early 1900s, called ‘Science in the Kitchen and the Art of Eating Well’, by Pellegrino Artusi, defined them as “regal cuts”: they are found among recipes of the Italian Renaissance noble courts, such as in the cibreo di rigaglie, a traditional dish from Florence. However, the most commonly known Italian recipes involving chicken offal are rice with combs and wattles and the finanziera, a Piedmontese dish dating back to medieval times. 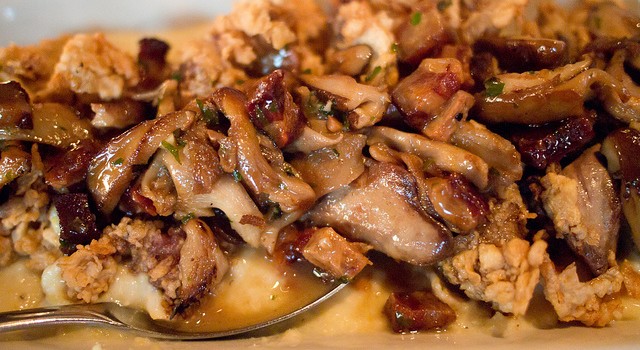 Stuffed goose neck is a traditional recipe from Belarus, which is also well known in Lombardy, as the recipe originated in rural areas where geese abounded. Goose meat, which is fundamental to rural economies, can be cooked in thousands of ways and trusted butchers will be able to supply all parts of the animals. Stuffed neck recipes can also be used for chickens or ducks, which simply changes the size of the final dish.

Pig’s ear recipes are particularly special: they are easy to cook and cheap, as they can be made with ingredients commonly found in the kitchen. The two most famous recipes are pig’s ear salad and bean and pig’s ear soup. Both are very quick to prepare and they are easy to make for even the most inexperienced cook. Pig’s trotters are another interesting lesser-known cut for those who enjoy eating pork. While not commonly found in Italy, in countries such as France they are part of the traditional cuisine. Famous French pig’s trotters dishes include pied de porc en gelée (in gelatine), pieds de porc panés (breaded) and terrine de pied de porc (pig’s trotters terrine). It is a fatty cut, although not excessively calorific: at 210 kcal/hg, it is on a par with other fatty pork meats, such as sausages and ribs.

Now all you have to do is give them a go in the kitchen!