At the end of last April, the Danish Council of Ethics recommended the introduction of a new tax on red meat. This proposal was based on the need to limit consumption of a foodstuff which, when produced on an industrial scale, has a considerable impact on climate change.

Fourteen of the council’s 17 members voted in favor of the proposal. ‘For a response to climate-damaging food to be effective, whilst also raising awareness of the challenge of climate change, it must be shared,’ said their spokesperson Mickey Gjerris. ‘This requires society to send a clear signal through regulation.’

The aim is to teach consumers to adopt more responsible eating habits and acquire more sensitivity to taste, a factor which is not taken into consideration often enough. Also last April, the first Danish Slow Fish workshop hosted the Slow Meat campaign in the small town of Thorupstrand to improve understanding of different components of the animal protein production sector—in this case, poultry, pork and fish—and how they interact. Small-scale local producers explained how they raised livestock and harvested fish as naturally and respectfully as possible out of consideration for animal welfare, but also to reduce the impact on environmental, social and human health to a bare minimum. 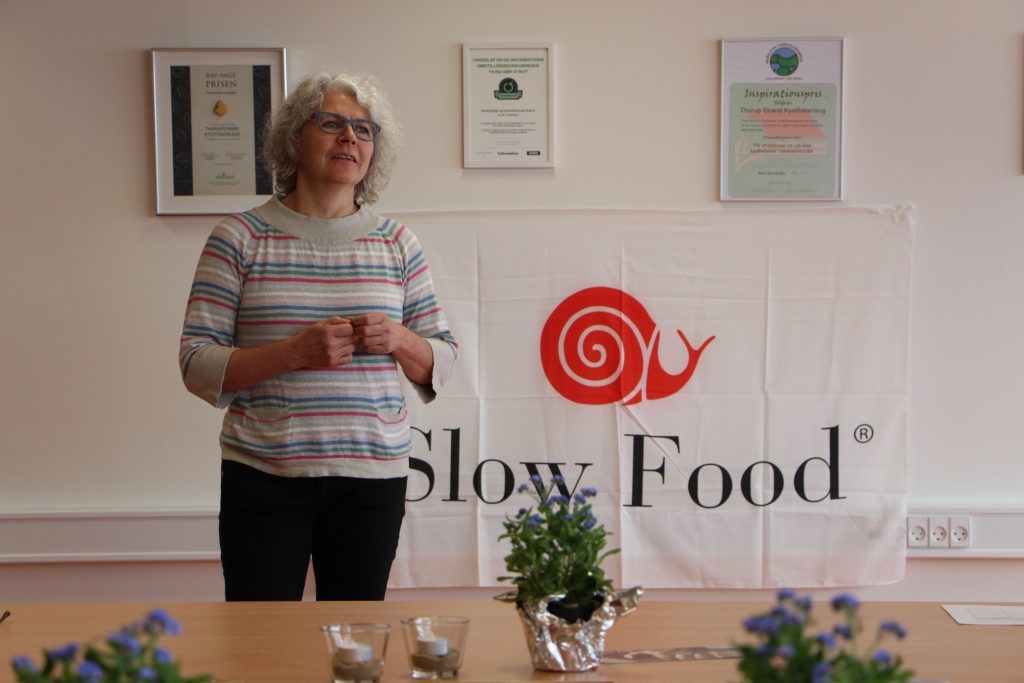 They also explained how remote industrial practices are from this scenario, and how future prospects for small producers will be threatened, unless consumers really become mindful of the impact their choices have and support ethical and ecologically responsible food production.

A lot of the discussion revolved around the concept of reconnection, seen as the need to bring human beings back to the land, to understand the close-knit network of relations and exchanges that exists between the environment in which they live and those who exploit it to produce consumer goods. Knowledge and awareness of this network are a cultural factor of paramount importance. The onus at the workshop was on reconnecting to the land and the communities in which we live, promotion of strong resilient culture at a local level, and the ability to recognize, appreciate and support the quality of (good, clean and fair) food. Mindfulness of the principle of reconnection is a way of humanizing our food system and avoiding the most harmful effects of commodification. It is also a way of building a future that puts food sovereignty at the center, remembering how our right of access to good quality food must never be compromised.

The role of taste is perceived as being central to reconnection. It is a fundamental aspect, and we should begin with taste when teaching consumers to fully understand the food they eat. To demonstrate this, we organized a workshop in which a chef cooked, in exactly the same way, pork, chicken and fish farmed or fished by small-scale producers (all of whom were present at the event) and the same meats produced industrially. It was a simple experiment but the results were amazing: the locally fished cod, for example, was beautifully flavored, delicate, friable and soft, whereas its supermarket-bought ‘competitor’ was tough with an overpowering flavor that tasted almost of ammonium. Likewise, the recipe made with local pork was much more enjoyable than the one using industrial meat. Chicken posed a problem or two because not everyone was able to recognize its qualities correctly. What was interesting, however, was to see how cooking reduced the industrial chicken’s breast to half its original size, revealing a fact that isn’t always that obvious: namely that what may appear to be the cheapest meat often turns out to be the most expensive!

Sometimes, however, taste isn’t enough on its own, and only ethics can guide us to the right choice.