Although Native communities in the United States and Canada already work together with Slow Food in preserving biodiversity, groups are now laying the first stones down a path to even stronger protection of indigenous peoples’ foods.

Slow Food recognizes the importance of developing relationships with a diverse range of Indigenous communities from around the world in order to preserve local knowledge. The Indigenous Terra Madre network involves thousands of individuals in over 370 communities worldwide. Groups such as the Terra Madre Balkans have also been established with great success in saving gastronomic traditions and food biodiversity.

With this in mind, representatives from Indigenous food projects around the U.S. recently gathered together with representatives from Slow Food as well as the Christensen Fund, to discuss the possibility and mechanics of establishing a Slow Food association specifically for Indigenous people from Canada, the United States and Mexico. Tentatively, the proposed association is being called Turtle Island. The ability to establish separate chapters under an association could give Native communities a better opportunity to network with one another, develop additional Presidia to protect Indigenous foods and send Native Slow Food delegates to the Terra Madre event in Torino, Italy.

The establishment of Presidia is key to sustaining the quality production of foods at risk of extinction, to protect unique regions and ecosystems, to recover traditional processing methods, and to safeguard native breeds and local plant varieties. So far, there are three Presidia in the United States that involve Indigenous foods: the Navajo Churro Sheep Presidium; the Anishnaabeg Manoomin (wild rice) Presidium; and the Makah Ozette Potato Presidium. The Navajo Churro Sheep Presidium has also nominated the sumac berry as a Presidium. During group’s gathering with Slow Food, conversations came up about how to protect other important foods like taro in Hawaii, heritage corns, maple syrup, chiltapenes (wild chilies in the Sonoran Desert), the California tan oak, and the broad leaf yucca fruit. 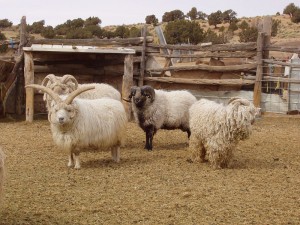 In addition to new Presidia, members of the group cited other advantages of the proposed association. Winona LaDuke, author of Honor the Earth, cited the value in the “opportunity to be part of an international food movement. The opportunity to hang out with food people from around the world who are like us. In my experience I found that my international exposure was enlightening. When I sent people to Italy, they came back empowered about how cool our food was and that we were as cool as anybody in the world.”

Clayton Brascoupe of the Traditional Native American Farmers Association described utilizing educational materials created by Slow Food about food production and climate change in his community. He also noted, “when we get recognized by other organizations at the international level, it reinforces what our elders in our communities have been telling us all these years. Then, we can pass that along to our kids and our grandkids. You’re not the only ones doing it. People all over the world are doing this. I think we need those allies to ensure that once we are being impacted, we have allies all over the world who are behind us, and that they know us, and they understand what our struggle is”.

Angelo McHorse with the Taos Pueblo Young Growers emphasized that for him it was “Not just what can Slow Food do for us, but how can we share these resilient indigenous food traditions with the world”.

Kaylena Bray, Melissa Nelson, and Elizabeth Hoover are currently in the process of drafting the official proposal to establish the Slow Food Turtle Island regional association. The proposal will be shared with Slow Food International, to be put before the March 29-31.