Archive » My Journey from Humble Beginnings to Slow Food 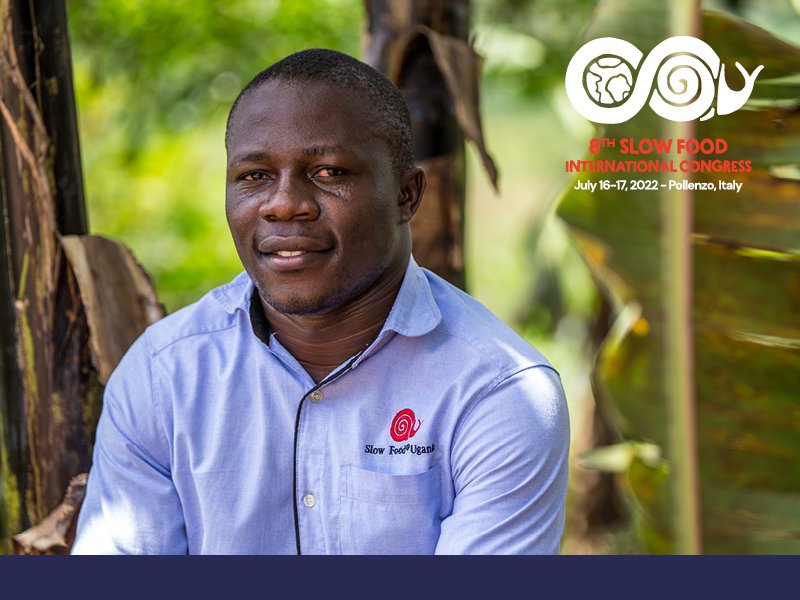 I was born into a relatively large family living on the northern shores of Lake Victoria in Uganda. Like many other low-income households in the region, our main source of livelihood was mixed farming on a small piece of land, which also supplied most of our food needs. I soon learned about the importance of farming and food production, and I always loved going with my mother and siblings to the garden. Every time there would be something to harvest, and we would also plant something at the same time, because of the mixed and intercropped nature of the garden.

On the other hand, at school, farming was increasingly becoming a way of punishing students for simple offenses like arriving late or speaking local languages rather than English at school. With all the work I had to do every morning at home and the strong attachment I have to my local language, I was a regular visitor to the school garden. Eventually I started talking to the teachers and trying to persuade them to let us do gardening not as a punishment but as an important activity, so pupils could learn how to grow food. I wanted to teach my classmates some extra skills and reverse the negative attitude they were developing towards farming. Of course this was ignored by the school management and I promised myself that one day I would do something to stop farming from being used as punishment.

That is why in 2006, after joining Makerere University in Kampala, I founded the Developing Innovations in School Cultivation (DISC) project in order to work with schools and communities to make farming an interest-oriented and productive learning activity rather than treating it as a punishment. My agriculture work in schools and a desire to expand the positive experiences inspired me to take up leadership positions in the Agriculture Faculty and to support more outreach programs to communities.

It was while at university that I had one of the worst experiences of my career. But it was also a turning point that saw me come to an important decision about agrifood systems.

As a very active agriculture student I had been given the opportunity to work on a project promoting hybrid maize seed around Kyankwanzi district. This hybrid maize variety was considered drought resistant, and I worked with a team to promote and educate farmers on how to grow this maize for higher yields. These higher yields would only come if all the recommended synthetic inputs were also used. Because farmers are always looking for ways to beat the harsh climate, many of them acquired the seeds and inputs for the growing season, ready to plant this new variety, which did best if planted in a pure stand, without the traditional intercropping and agroforestry systems.

But early in the first growing season of 2007, drought struck and resulted in losses to farmers who had allocated large pieces of their land to only maize. I went back to the community to meet farmers, as it was standard practice to check, evaluate and provide support, and I could not believe the damage this system had caused to the communities. As I talked to them, I could feel their disappointment, frustration and insecurity. This led me to rethink which production system really works for African communities if we want to eliminate hunger, poverty and malnutrition, among other injustices. As I apologized and sympathized with the farmers, I started thinking of working with them to rebuild a local system based on local resources, knowledge and traditional diverse farming systems. In effect, regenerating the local systems to become as resilient as those that used to exist.

I vowed to commit to this decision, even though at the time I lacked much knowledge of sustainable food systems. However, I did have my childhood experience on our small family farm, which helped me to continue with the path I had chosen. I quit my enticing job with a well-funded project with a lot of future career prospects developing agribusiness solutions because I could see that those solutions do not work for local people, but only create more suffering and agony around the world. I started seeking more knowledge on how to rebuild traditional farming systems based on local ecosystems and I began organizing training sessions with a few farmers to rebuild the traditional African farming system, a system that respects the local environment and seed system knowledge and is based on local inputs and resources.

Most importantly, I started incorporating this knowledge in the school gardens that I had created and with which I was actively working. It was a lot of hard work, but over time I began collaborating with other students who supported my idea and coming up with local communication innovations like utilizing community radio. I started looking out for other people and organizations who were also concerned with rebuilding food systems based on diversity, local resources and knowledge and working with communities moving in the same direction, as well as those who had a connection with the education project I was running in schools. I shared this inspiration and experience via learning platforms on the internet, which is how Slow Food found me. I felt a great sense of relief when I learned that there were other people who cared about these issues and that I was not working alone against the big forces. The real unforgettable moment of my first encounter with the Slow Food movement and the Terra Madre network was when I was invited to participate in Terra Made 2008, a real joyful, learning, networking, inspiring and regenerative experience that gave me the strength to go back home and do more to build a wider, more effective and stronger network and to join the movement for a good, clean and fair food system. That is the electrifying sentiment of Terra Madre.

Reflecting on my story, I realize that there are many farmers, artisans and other grassroots activists from humble beginnings and rural communities whose work gives a practical meaning to our philosophy and translates the founding ideas of Slow Food into reality.

Finding ways of continuously welcoming this diversity, enthusiasm and creativity in our structures creates a wealth of diverse knowledge, skills and experiences that enriches our global movement from the local level up. The new organizational structure opens up new opportunities for our network to break social and geographical boundaries and have a more open and inclusive reach. The participatory foundation model that we are adopting from July onwards is a result of collective thinking and reminds us who we really are, a true grassroots movement made up of members in convivia and communities from every corner of the world. It will give us the strength vital to confront and challenge the complex shortcomings of the current food system, characterized by a series of crises and injustices. It is important that we put more effort and resources into strengthening and growing this interconnected grassroots network by training and nurturing more leaders and more activists, opening up to more communities and building our membership base in the convivia. It is also important to open our doors, hearts and minds to collaborations with others who are walking the same journey as us, creating advocacy alliances and other partnerships.

The time has come when we must step out of our social and geographical bubbles and create links with others who share the same vision of a good, clean and fair food system and those who are working to regenerate the planet.

This interconnection inside and outside our network creates a mosaic that may initially look imperfect. But in the end the small pieces of this mosaic all together build a strong image of a snail, one that is clearly visible and strongly present in all parts of the world. Through complex wisdom and physical actions, Terra Madre brings us together to define our grassroots strength.

This path is also very important to the development of our thematic networks and creates a healthy ground for the cross-pollination of ideas on how we can develop robust management systems for our major projects and other grassroots activities. It may sound complicated, but with the call to action as our guiding document and with the open and inclusive organizational structure we are adopting, I am sure that our path towards a good, clean and fair food system will only become clearer.

We are stronger together.