Every day the Slow Migrants network supports cooks, farmers, cheesemakers, beekeepers and many others who cultivate the diversity of their lands, putting slow processes of adaptation into action and giving rise to new cross-cultural gastronomic fusions.

Slow Food is trying to shine a light on this often-submerged world, a microcosm capable of changing the lifestyles and the economies of migrant communities and their destination countries, creating the basis for the construction of multi-ethnic society. 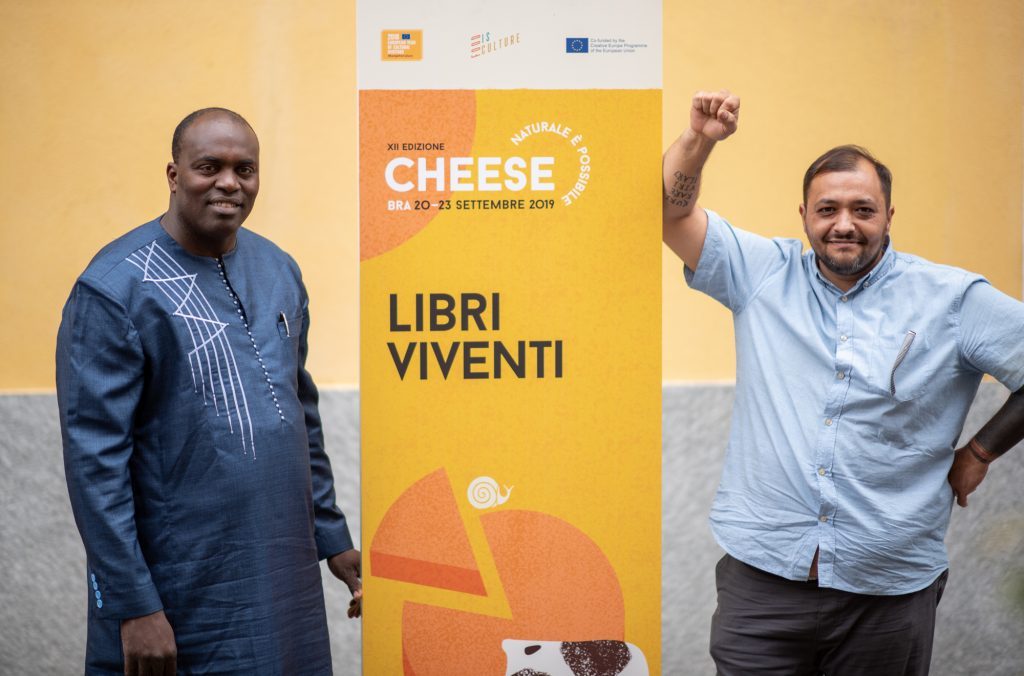 At Cheese 2019 we showed a short video about “Libri viventi” (Living books), and presented all the activities we’re working on as part of the project.

Thérèse Theodor, is a Haitian woman who has been resident in Genoa for over 30 years. Her home restaurant and catering service are a proven success in the city, and it’s all a result of her talent in the kitchen. Like Thérèse, Ana Cecilia Ponce also manages a restaurant, “her revenge”, she says. Her journey to Italy from Peru is a story shared of lots of Peruvian women and her experience is an inspirational example for others. Essediya Magboul comes from Morocco: cooking has been her passion since childhood, and with the Recipes of Dialog project she’s been able to make a new life for herself in Italy.

Andreea Luminita Dragomir was the winner of the Slow Food-Terra Madre prize at the 14th edition of “Lingua Madre” (Mother Tongue), a national literary competition. Born in Oradea, Romania, she’s a cultural mediator, lover of gastronomy and a writer of stories and poetry. “I’ve been living in Italy for 11 years, and with my stories I want to transmit the aromas, the colors and the memories of my childhood in my country. I’d like my words to become a bridge that connects the past and the present, in a life that’s in constant flux.”

Luisa Zhou was the winner of the Slow Food-Terra Madre prize at the 11th edition of “Lingua Madre”, which is given to foreign authors inspired by the theme of food and its production. “I was born in Turin to parents from a small village in the province of Zhejiang in southern China. Unlike many others here, I know the difficulties which arise from feeling like you belong to a place that’s so far from your roots, even if you are born there.”

People stopped by out of curiosity, occasionally a little perplexed by the unusual format, but any such doubts evaporated when the storytelling began. Sitting down facing each other, the visitor and the storyteller were able to talk in a dialog without barriers about their lives and culinary traditions. Talking about food implies talking about the countless relationships that derive from its production and consumption: relationships with faraway lands, new homes and all the people along the way. 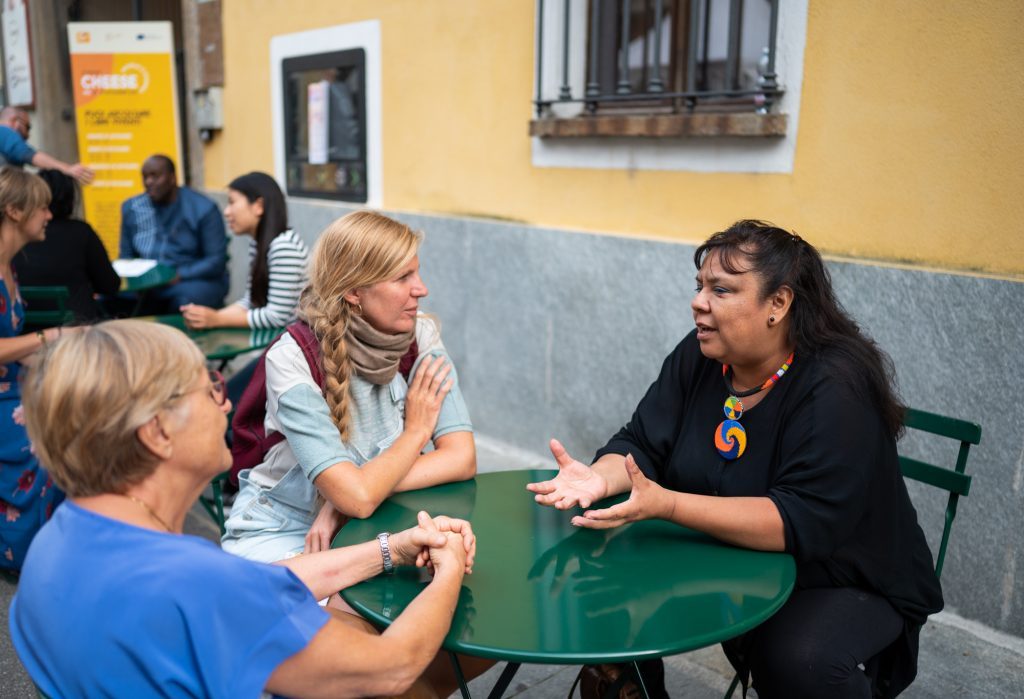 There are numerous projects which Slow Food is working on within this framework. One of them is Recipes of Dialog, through which Slow Food and other associations work to make social and gastronomic integration an added value both for new arrivals in Italy and the people who live here already.

“For those who are forced to escape from their countries of origin the theme of work is central,” explains Matteo Gnone, integration consultant for the United Nations High Commissioner for Refugees and speaker at Le ricette del dialogo: la strada dell’inclusione. “But that’s not all. There’s questions of housing, documents, discrimination. It’s not simple, yet we may sometimes ask ourselves why there should be integration, especially regarding work, between migrants and the young people from our country? Because the economic and social cost of integrating these people will never be too high. On the contrary, it’s a way to save future resources, because if people are forced to live on the streets with no help or possibility of dignity, the cost for our society will be tripled, and we’ll lose an enormous opportunity for growth and integration. So that’s why the projects being carried forward by Slow Food and the University of Gastronomic Sciences are crucial: food is a great prism through which to view the world, as well as being a perfect instrument for integration through pathways that put people’s dignity front and center.”

“Working with migrants isn’t simple,” as Nigerian cultural mediator Grace Aigbeghian explains. “In the case of women who are victims of trafficking, they’re often clandestine, afraid, forced to undergo absurd rituals that they don’t have the courage to report to the police in order to protect their families back in Africa. We need to gain their trust. We often activate street units twice a week: we reach these women in the streets, try to get to know them, understand them and above all bring them to place where they can be helped to get documents in order to live in Italy, get access to education (from language to professional training) and to support themselves independently and legally. It’s not simple, and we mustn’t believe that they’re waiting for us to come and help them: they’re afraid. All projects which can assist us in providing them with new opportunities, as well as giving them back the hope of a better life, are fundamental.”

THE GRIOT OF CARMIANO, RACONTEURS OF GASTRONOMIC TRADITION

In West Africa the griot was – and is – a poet, singer, musician and actor and storyteller: a living repository of oral tradition. The Griot of Carmiano, a town in the Salento peninsula not far from Lecce, are raconteurs of gastronomic traditions – and they don’t all come from Africa. Khadia is from Mali, Bisharu …

The New Farm to Fork Strategy: the Key Things Every European Needs to Know

Last week, the European Commission published the long-awaited Farm to Fork Strategy. The strategy, part of the European Green Deal – the most environmentally ambitious legislation proposal of the new Commission, which started its five-year term in December last year. The Strategy aims to make the European food system more sustainable across different dimensions and …

Ecological transition in agriculture is the only way to save bees

For some months now we have only heard of the ecosystem, the need to take care of it, the opportunity we have to change the way we operate. The emergency we are experiencing today, with human losses that have distorted the lives of many of us, asks us to look at the ecosystem in a …

SFYN Podcast: collecting stories from across the globe

Slow Food Youth Network (SFYN) is starting a new adventure: the SFYN Podcast! With the goal of giving a stage to the people, whose voices are often not taken into consideration, or who are simply overlooked in the debate around food, the podcast will share stories, interviews, advice, and experiences from the young members of …