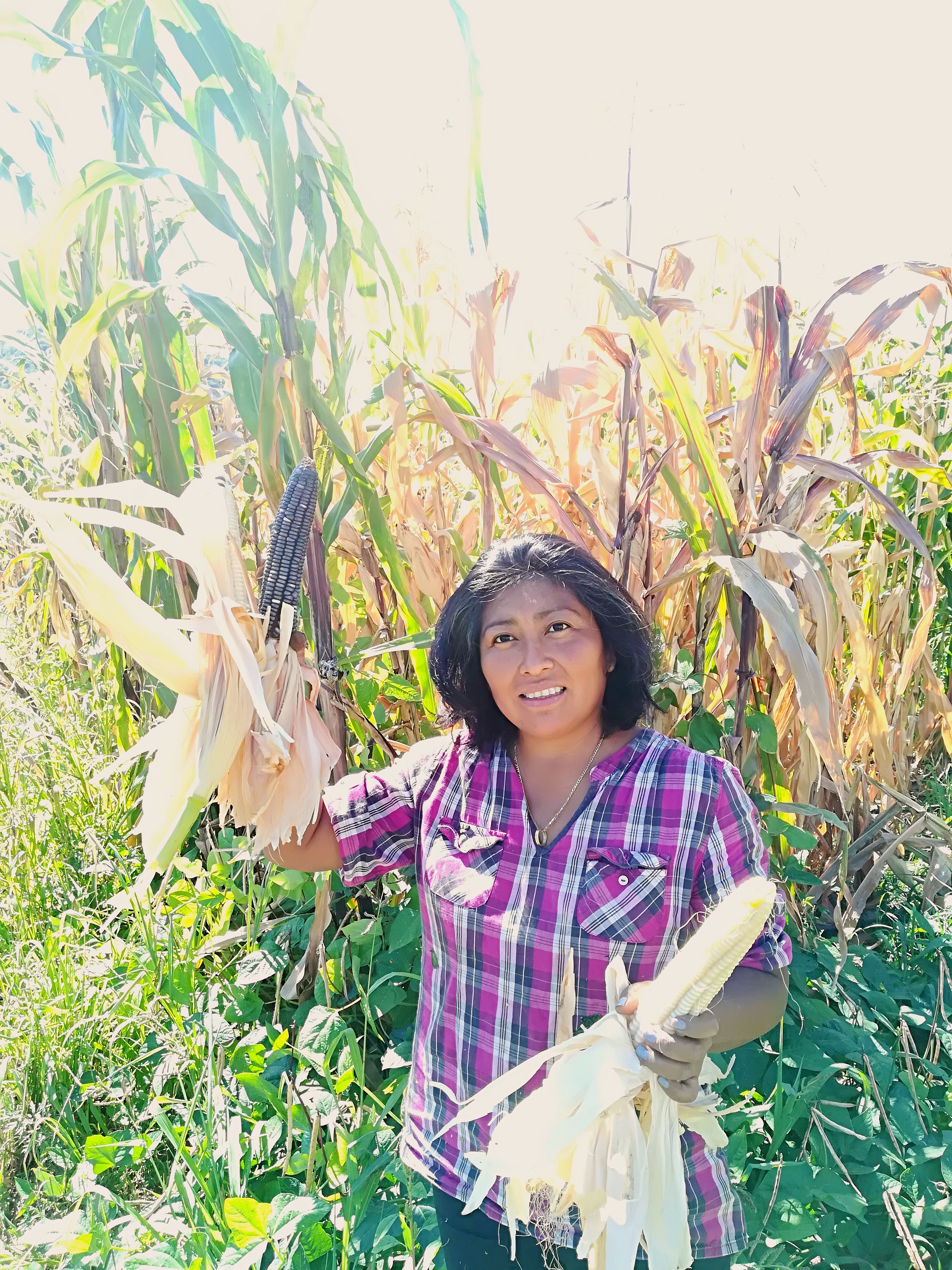 Chan Cab means “little honey” in the Mayan language. Though she has lived in Italy for 20 years, Dulce Chan Cab is originally from Mexico and has vivid memories of the Mayan culture in which she was immersed from an early age. She will share with us ancient rural traditions, the flavors of indigenous ingredients and recipes that reflect historical and cultural interminglings.

Since I was little I have always felt very connected to the milpa. Mine was a farming family: We grew almost everything that we ate, working together in the fields and helping with preparing the food. The milpa is a way of cultivating the land that today we could call “synergic,” meaning an intercropping of different plants. Depending on its location, the milpa can bring together various crops, the main ones being corn, beans and squash. The milpa is at the base of Mayan culture, from which it comes. My grandfather was Mayan, and proud of it. He always preferred to speak in his language, refusing to learn Spanish. So I grew up in a Mayan family. We had a solar, a word used in the Yucatan to identify the place where fruits and vegetables grow. It’s a kind of kitchen garden and all homes had one, as it was an integral part of life. A solar and a milpa: That was how we lived, every day, connected to the land.

I moved to Italy 20 years ago and I’ve never stopped cultivating my traditions. It’s from the milpa and the solar that I had the idea of growing a garden together with some friends. Producing what you eat is important, as is the social side of cultivating and cooking together. As well as the garden, for 12 years I’ve been part of Tatawelo, an association that imports coffee from Mexico to Italy through fair-trade channels. Tatawelo wants to promote an alternative, sustainable economy, buying the raw materials direct from producers. I follow this project personally, travelling to Mexico every year as a volunteer. And a series of collaborations with the Colibrì cooperative has allowed me to teach Mexican cooking in schools. So I’ve been able to run courses in catering schools around the province of Cuneo, sharing traditional recipes and fair-trade products. It was just a few lessons, but cooking with the kids was great!

Food is a fundamental part of our life. Everything starts from food, before arriving in other worlds. I think about the fact that I can reproduce typical Mexican recipes, like chilaquiles verdes de tomatillo, in Italy. In the garden I’ve planted tomatillos, known as “the tomato’s grandfather,” a small green fruit that grows inside a papery casing. Once ripe, the casing breaks and the tomatillo inside turns yellow or violet, depending on the variety. Then it’s time to turn it into a salsa and serve it with tortillas. Tomatillos have a different flavor from red tomatoes: A little sweet, quite tart and very, very delicious. Tasting it is a journey! In the garden I also grow chilies of all types, chia, amaranth, different types of corn (red, white, green, black) which I’ve mixed with other varieties (like Bergamo red corn). All of these products are the basis for my Mexican and Italian recipes. Vitello tonnato, lasagna, ravioli, plin, tongue in green sauce: all the typical Piedmontese dishes that I learned while working in a delicatessen in Piasco.

I’ll be bringing Mexican food to the festival, and two dishes in particular: chilaquiles verdes de tomatillo and guajolote en escabeche oriental. Chilaquiles verdes de tomatillo is a typical Mexican breakfast: triangles of corn tortillas fried and served with a salsa made from green tomatillos and serrano chilies. The chilaquiles can also have chicken, beef, chorizo, eggs, Oaxaca cheese (a soft cow’s milk cheese typical of Mexico), Spanish manchego cheese, onion or avocado. Guajolote en escabeche oriental, on the other hand, is based on an Arab recipe, which was adopted by the Spanish and then eventually became typical of Yucatan’s gastronomy, thanks to the addition of an indigenous ingredient: turkey, guajolote, native to Mexico. As the history of this dish shows, cooking is an exchange between cultures. This is what I want to share at the Migranti Film Festival through my dishes: encounters and interminglings through food.

In addition to the cultivated things sometimes I struggle to find one thing, which I missed a lot and which I’ve grown in the garden, huitlacoche, a richly flavored fungus that grows on corn. It stays in the ground and regrows when it rains. It can be pureed, cooked in risotto, served with tortillas, with onions, with eggs. You can use it everywhere, it’s rich in protein and has all the essential amino acids. It’s a superfood, but it’s not well known in Europe, and in fact in France and Italy when farmers see this black stuff on their corn they remove it. But the Aztecs believed it was a gift from god.