Also known as Tanganyika, the Red Maasai is a native sheep breed traditionally reared by the Maasai community in East Africa. It is found in southern Kenya, northern Tanzania and some parts of Uganda, in arid and semi-arid regions along the Great Rift Valley.

Maasai land has long been subject to various pressures: often grabbed from herders and given to other groups or private investors. Grazing land has been reduced and the indigenous peoples have been forced to move, often violently. Recurring droughts, worsened by climate change, and the growing numbers of young people moving to the cities have all compounded the problem. Since the 1970s, Kenyan agricultural policy has promoted crosses between the Red Maasai and Dorper and other imported sheep breeds, making it increasingly hard to find purebred Red Maasai sheep. Saving this breed is essential for the preservation of a genetic resource and a resilient animal, able to survive disease and a rapidly changing climate.

The Presidium has been established thanks to a collaboration between Slow Food and IFAD. One of its objectives is to strengthen the Maasai community through training, technical assistance, experience exchanges and the creation of marketing channels, with a particular focus on including women and youth. The Maasai community will also be involved in the national and international activities of the Terra Madre Indigenous network, a platform for sharing and exchanging experiences that helps indigenous peoples work together and find solutions to common problems.

We interviewed Tunda, Maasai youth woman appointed as Presidium Representative by the community”, about the project. 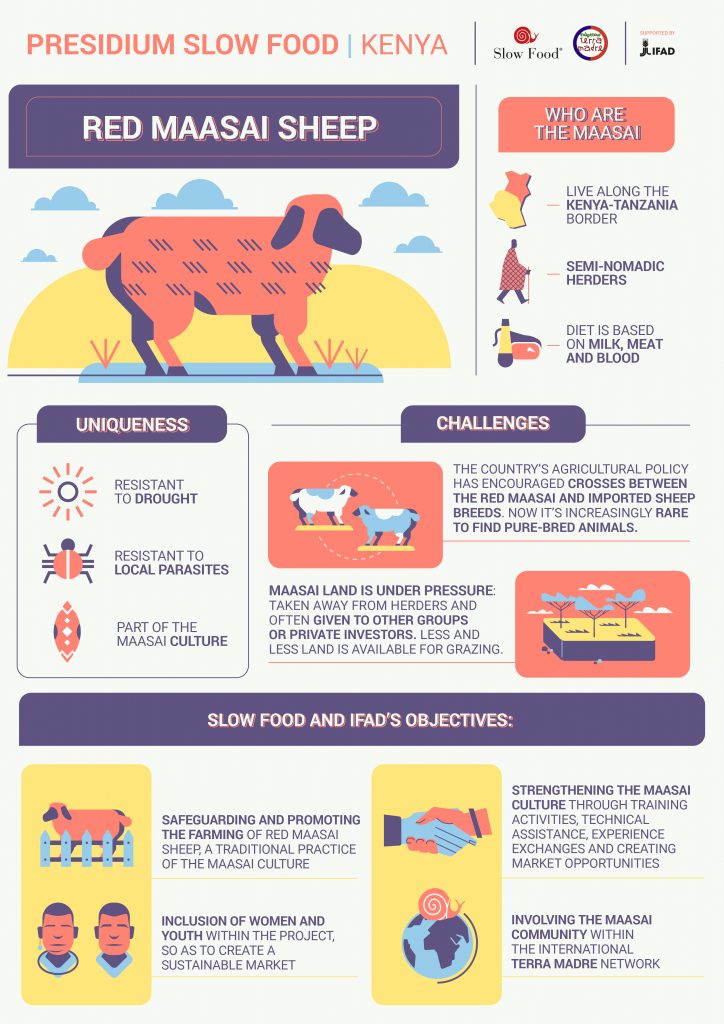 What does it mean for you to be part of the Slow Food global network?
The Slow Food movement provides a platform to promote and advocate for our indigenous rights through our traditional food. It helps us preserve our Maasai identity and heritage through the preservation of the Red Maasai Sheep. Being part of the global network means strengthening and amplifying my voice as an indigenous person. It is also means that I am part of a life-changing organization that promotes healthy living through good, clean and fair food. To my community it means longevity, pride and prosperity. This will play a significant role in ensuring that our identity is not lost, that we raise a healthy next generation which is conscious about their food choices and which advocates good, clean and fair food systems. Through the creation of market connections, we will ensure that the community gets a fair prices for their animals. 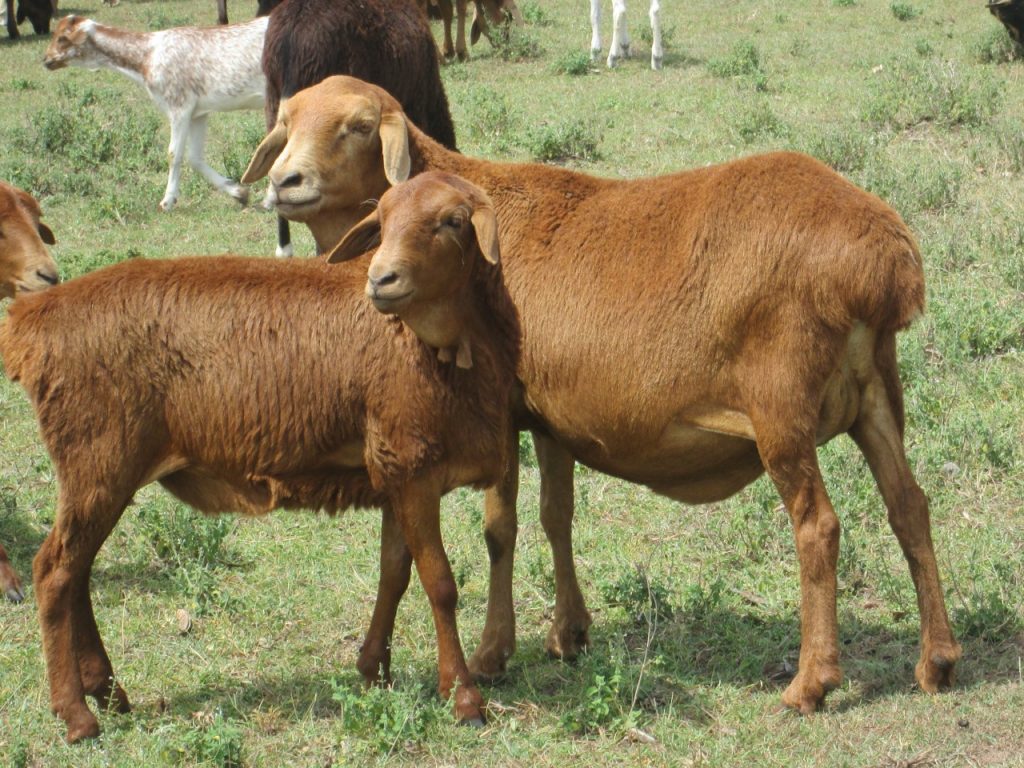 Which is the main challenge for the community?
The issue of climate change continues to attract a lot of interest globally. In Kenya, indigenous pastoral communities are among the hardest hit. Livestock is a primary source of income and savings account for pastoralists not just here but across Africa. Any decline has a direct impact on food security among pastoral and indigenous communities.
The effects of the 2017 drought (the worst since the 2011 Horn of Africa food crisis, declared a national disaster in the beginning of 2017 by the Kenyan President) continues to be felt today. After three years of erratic rains the effects have been devastating: grazing lands and other vital resources have been destroyed, leaving thousands of pastoralists and their animals desperate for survival. Though drought is a recurring phenomenon, climate change has increased the frequency of droughts, making it a major concern in the Kenyan development agenda.
It is also worth noting that land grabbing has continued in the Maasai land. Indigenous pastoralists are losing their grazing land and water resources to landowners, wildlife conservationists, beef producing ranches, government mega projects (like LAPSSET), and extractive industries that are expanding their activities. The chain of events is pretty straightforward: when climate change hits and pastoralists are cornered with limited mobility for their livestock, there is no water to drink, no grass grows and the cattle starve to death. This puts indigenous peoples’ food security and well-being directly at risk.
Indigenous breeds and diversity provide key solutions in mitigating and adapting to climate change. However, these breeds are at a risk of extinction and a lot needs to be done to raise awareness of their importance. Through organization and empowerment, indigenous communities like the Maasai will be able to raise their voices and fight back against land grabbing. We are the custodians of traditional indigenous knowledge that has enabled us to survive the test of time.

Why is this form of resistance, through food, important in your community?
A number of changes have taken place in Maasai community as result of continued interaction with other communities in the country. Though the Maasai are nomadic herders, some of them have started farming due to population pressure, subdivision of land and drought. It is therefore becoming very difficult for the communities to sustain themselves only through livestock keeping.
In addition the false promises of modernity have had an impact on Maasai food culture. Today grilled meat, rice, maize, cakes, eggs and other exotic foods are becoming popular in our daily diet. This is in addition to changes in dress code and the art of building our traditional houses. Promoting the Red Maasai Sheep is not only good for food security but also a way of living in harmony with nature while preserving the Maasai’s cultural heritage and improving livelihoods.
A lot of challenges facing the Maasai community will be addressed through this project, in addition to ensuring that the community is united, able to protect its native lands and its food sovereignty. Furthermore, community participation in Slow Food events and the strengthening of the Indigenous Terra Madre Network will create a platform for exchange, sharing and finding solutions to common problems e.g. land grabbing. To address the issue of rural–urban migration among the youth, economic opportunities will be created through the creation of direct market connections between the community and food outlets. This will strengthen the Red Maasai Sheep value chain and make indigenous sheep husbandry attractive to the next generation. 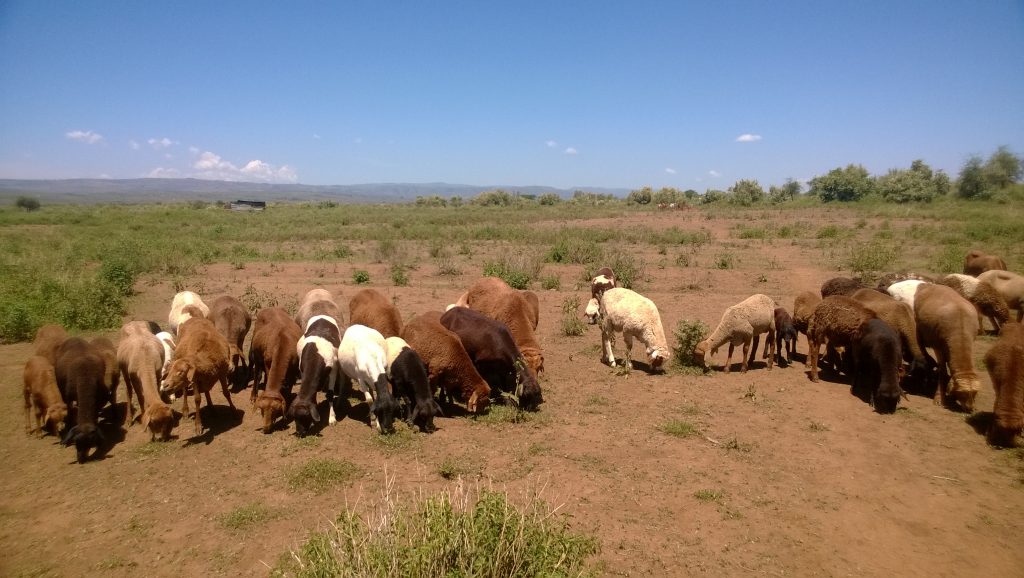