Most chefs have a business owner, a direction and a concept. But when Dennis Johnston and his wife Monica opened their restaurant, Fid Resto, in Halifax, Nova Scotia, they had none of these things. “I could do whatever I wanted. That’s a scary place to be,” he said. Scary, sure, but it is also a place that allows for creativity and the opportunity to do something different.

Dennis decided he wanted to serve local food to local consumers. Amazingly, this was a new and different direction for Halifax restaurants in the 1990s. 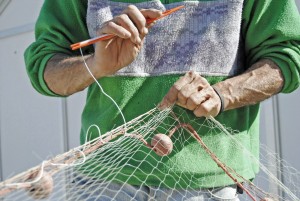 Trash fish on the menu

Originally from Nova Scotia, Dennis moved to London as a young man to work as an apprentice chef. It was there that he first learned the value and importance of buying directly from a market. He later returned to Canada and worked in Montreal. It was during this time that the Slow Food movement emerged. “The Slow Food movement made sense, so I started buying food from local foragers,” he explained. He returned to Nova Scotia in the late 1990s, and opened Fid Resto in 2000. Home to the oldest farmers’ market in North America, the local and organic movement has always been strong in Nova Scotia. When Dennis was tasked with making his first menu for Fid Resto, the farmers’ market was his first stop. Since then, Fid Resto has served food that is 98% locally sourced, including freshly churned butter. They even make their own salt.

In Nova Scotia, buying from local producers also means buying from local fishers. Dennis began buying by-catch, including monkfish, ocean perch, hake and other species caught with the more “sought after” fish. Although serving by-catch was controversial, Dennis felt it was an environmentally friendly practice, especially as most by-catch ends up back in the sea, dead. “Trash fish” also makes for inexpensive and delicious menu options.

Daily struggle
Despite an abundance of fish, seafood has never been a celebrated part of Nova Scotia’s food culture. Historically, the opportunities for export were too great, making it easier to ship locally caught fish to Boston than around the province. This means that Dennis often struggles to acquire the local seafood he wishes to serve. Unfortunately, if faraway buyers and processors drive prices, local seafood markets are unable to thrive. For example, one day Dennis contacted several local fishermen looking to buy sea urchins. However, he was unsuccessful. Due to the price for sea urchins in Japan being low, it was not considered worthwhile for the Nova Scotia boats to go out: The boats were tied up.

Alongside groups such as Ecology Action Centre, Off the Hook Community Supported Fishery and Slow Food Nova Scotia, Dennis has started working to help develop local seafood markets. Slow Fish Nova Scotia was launched last spring with a dinner at Fid Resto. As Dennis describes, “We are trying to change the way people view fish and fishing.”

After 13 years of running the restaurant, Dennis and Monica have now closed it to pursue other projects. Their passion for cooking and local food continues to influence their other work, including cooking and serving food in clients’ homes. “It’s quite fun actually. The menus are varied and they usually give me free reign on what I can do. I use a lot of local fish and seafood.”
Dennis also continues to lead Nova Scotia in the local food movement, making waves through his work with Slow Fish and the local fisheries and restaurant scenes.

The Slow Fish campaign in Canada

Fishing is a critical issue, given the dwindling state of global fish stocks, pollution of the oceans and its impact on the livelihood of small-scale fishing communities. By engaging the entire Canadian Slow Food network, the Slow Fish Canada campaign will invite people to find local solutions to support better management of our freshwater and marine resources.