Archive » Let’s Not Eat Up Our Planet! Fight Climate Change

In a few days, governments from around the world will be meeting in Paris to talk about climate change. After more than 20 years of failed debate, mediation and forums, the Paris conference (COP21) will attempt to broker a binding, universal agreement for the first time. 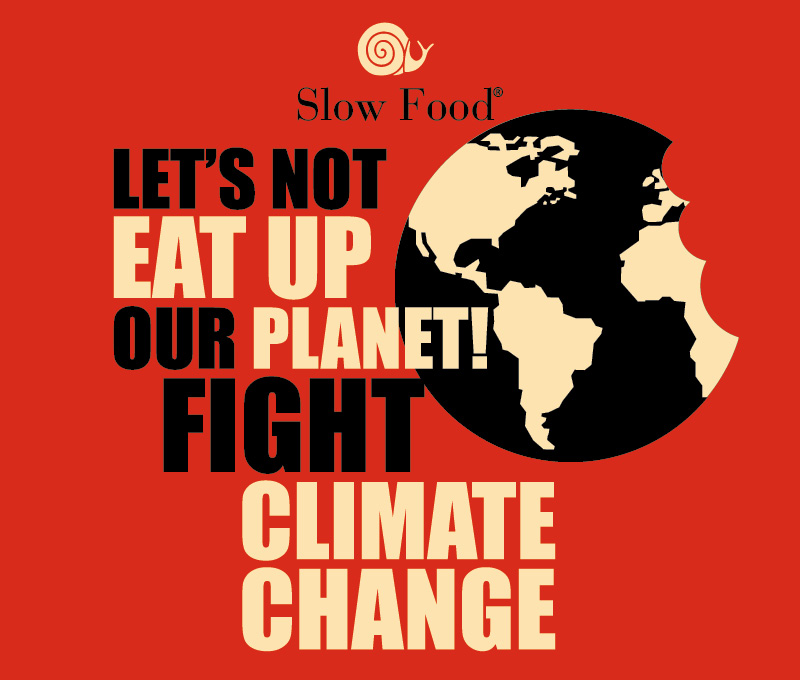 In the 54 pages of the text of the negotiations, however, the term “agriculture” does not appear once, though there are multiple mentions of food security. Slow Food believes this is a serious omission.

The absence of this word means relegating to the margins of the discussion an issue that is in fact of central importance: the relationship between food and climate. Depending on the system used as a reference, agriculture, livestock farming and food production can represent many things: one of the main causes of climate change, one of the main victims or one of the possible solutions. The fact that attention is focusing on the sectors of energy, heavy industry and transport means the key role of agriculture is not being recognized.

This is why Slow Food is directing the appeal “Let’s Not Eat Up Our Planet! Fight Climate Change” to the representatives of the nations and international organizations gathered in Paris, in the hope that agriculture is placed at the center of the debate.

This appeal arises out of the need to show that only through a radical paradigm shift in the current system of food production, processing, distribution, consumption and waste can we hope to mitigate climate change.

It is increasingly urgent that we restore value to food, reduce waste, promote agroecological practices and encourage short distribution chains.

If, instead, the modern industrial agrifood production system continues to prevail—a system based on the growing use of oil derivatives, production on a huge scale and the indiscriminate exploitation of natural resources—not only will it not be possible to reverse current trends, but there will be an increasingly negative influence on the rising average temperature. According to the IPCC’s Fifth Assessment Report, in the last century we have already seen a rise of 0.85°C.

The modern industrial agrifood model is based on an idea of infinite growth, but our planet’s resources are finite. Harmonizing this awareness with world population numbers, predicted to reach 9 billion by 2050, is one of the most important challenges we face today. This is why we are asking for the food system’s decisive role to be taken into serious consideration and for the nations and organizations gathering in Paris to promote effective international policies, aimed at radically changing the current food system.

Download the appeal Let’s Not Eat Up Our Planet! Fight Climate Change
Let’s make our voice heard! Add your signature
Click here to discover who is supporting our appeal