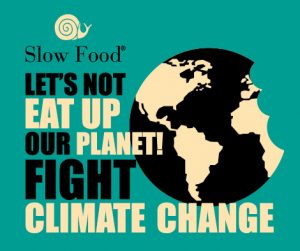 “Taking action with regard to the production and consumption of meat, as well as soil fertility means fundamentally changing the agro-industrial food system characterized by free-market economics and an impossible dream of infinite growth. To combat the devastating consequences of this system, not least climate change, it is essential that governments renew and reinforce their commitment to limit greenhouse gas emissions, but this alone is not enough: we now need a paradigm shift.” Carlo Petrini

Last year, during COP21 (Paris, November 30 – December 11, 2015), Slow Food published an appeal entitled: “Let’s not eat up the climate”, inviting governments across the world to find an agreement on the climate, focusing attention on the theme of agriculture, or rather, the agro-industrial system, which unfortunately remained at the margins of the discussion, despite being one of the principal sources of greenhouse gas emissions and therefore, one of the principal causes of climate change.

Since then, some progress has been made, such that COP22 (Marrakesh, November 7-18, 2016) will consider the question. But still not with the focus we’d like. The Conference will in fact discuss the effects of climate change on agriculture, but without allowing for the enormous responsibility that industrial agriculture has for climate change. Slow Food is thus maintaining a critical position and will ask the representatives of the countries and international institutions meeting in Marrakesh to take into serious consideration the decisive role the food system plays through its close connections with the climate, and to avoid relegating it to the sidelines.

For this reason, Slow Food pushes for more serious discussion of a particularly urgent topic that will likely be ignored at Marrakech: the industrial production and ever-increasing consumption of meat, despite the fact that the connection between raising livestock, meat consumption and climate change has been clearly drawn, starting with the FAO’s 2006 report, Livestock’s Long Shadow.

In particular, according to a 2013 revision of the report, industrial animal production and ever-higher meat consumption are responsible for 14.5% of greenhouse gas emissions, if the entire supply chain is taken into account, from the cultivation of crops for feed to final consumption. This situation will worsen. The FAO has predicted that global meat consumption, which has increased fivefold since the middle of the 20th century, could double again by 2050. The planet cannot support such a situation, and the negative effects are already clear now: not just on the environment, but on human health, animal welfare and social equity.

What is needed, therefore, is a radical, concerted intervention to educate the public to change their eating habits in order to support virtuous small- and medium-scale farms wherever possible, and reduce our dependency on industrialized agriculture.

Another area of intervention must be soil fertility. Having healthy, living soil, is essential in order to guarantee food security and preserve biodiversity, as well as to protect us from environmental disasters, climate change and food emergencies. Defending the soil is an integral part of any imagined future for human, plant and animal life. And yet soil fertility is increasingly under threat. Human activity—from bad agricultural practices to rampant urbanization—has heavily damaged the health of the world’s soil, causing erosion, salinization and desertification. This is why Slow Food believes it is essential to recognize the soil as a common good and to protect it from excessive overbuilding, contamination, erosion, loss of organic matter and loss of biodiversity.