Krakow’s reign as the European Capital of the Gastronomic Culture 2019 might be over. But it remains as one of the new culinary hot spots of the Continent, and a great place to visit because of its rich gastronomic heritage. We will begin the new season for gastronomes in Kraków with a meeting dedicated to the Slow Food movement values.

The star of the event will be Lena Flaten from Flammans Skafferi restaurant in Storlien in the north-west of Sweden.

“I have a lot of expectations ahead of my Krakow visit,” said Lena with a bright smile.  “One of my goals is gaining knowledge about relations between the artisan food producers or farmers and restaurants and cooks. Also, an opportunity to meet some amazing local chefs and see the city and surroundings of Krakow means a lot to me.” 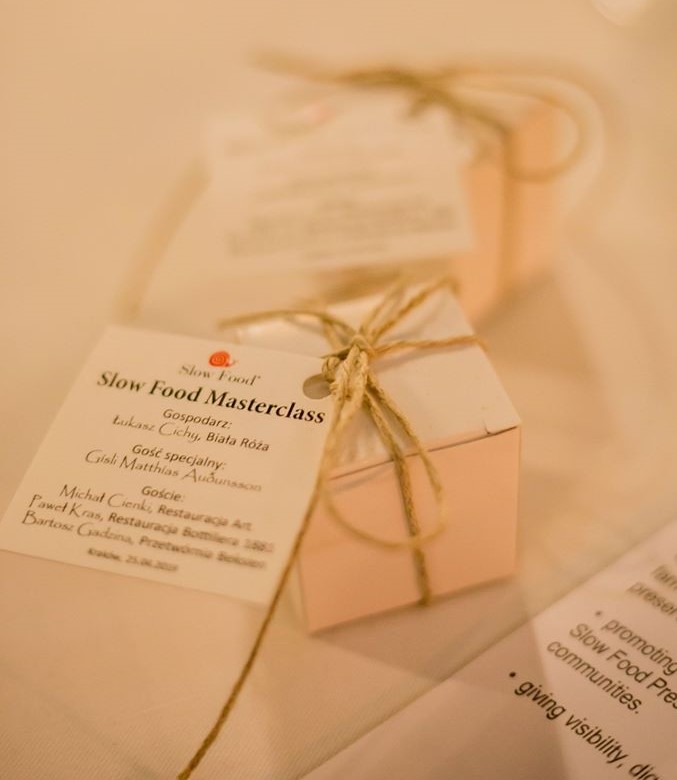 In early 2019 Lena won a special contest called “Food is Culture.” Cooks from several countries submitted their recipes and stories presenting food traditions from their regions. Lena’s “Taco Jämtland,” featuring beans, mushrooms and goat’s cheese with a gooseberry sauce, was the winning recipe.

“We work with what we call “relationsmat” (relationship food). It represents our connection with the farmer, vegetable grower, hunter, etc. It allows us to keep track of and influence the origin and treatment of all the products we use. We also pick mushrooms and forest berries ourselves,” said Lena.
“We cook these amazing products with love and respect in a traditional spirit at my restaurant. The result of this efforts is my contribution to the Food Is Culture contest. I tried to put all the best we have into Taco Jämtland, a dish, that can be served in the restaurant, but also as a street food snack.”

Łukasz Cichy, head chef of the Biała Róża restaurant, will host the dinner in Kraków. Three other chefs from the city and region will accompany him: Patrycja Stefanów-Kot (Koncertowa restaurant in Krynica-Zdrój), Marcin Pławecki (Gęś w Dymie restaurant in Laskowa) and Marcin Sołtys (Filipa18 restaurant in Kraków).
Łukasz himself, recognized by Gambero Rosso as one of the most inspirational Polish chefs, is happy to host Lena and the others in his place.

“For me it is a fantastic idea to organize such cooking workshops and dinners as Slow Food Masterclass. It’s a great way of integrating chefs, learning about different approaches to food and cooking, but always with great respect to the product and quality. Personally, it is an amazing experience and a true cooking adventure,” said Łukasz.

Dinner on January 15th will be the sixth and final of the Slow Food Masterclass Kraków series.

“When we started in April last year, I wanted to ensure the Slow Food movement was well represented in Poland,” said Szymon Gatlik, architect of the event.
“I believe one of the most important things is learning about other cultures and finding inspirations, also in the art of cooking. Slow Food Masterclass has proven to bring a lot of energy, exchange of knowledge and simply fun for everyone – chefs, Kraków foodies and everyone, who cares about Slow Food.”