The Bourbon Red is the Thanksgiving turkey par excellence. Majestic and proud, with beautiful plumage, at one point the bird almost became the national symbol of the United States. Then, however, it sank into oblivion, risking extinction, before producers, chefs and conscious consumers contributed to the breed’s revival.

When you ask a 6-year-old to trace her or his hand and create a turkey with construction paper, it is the Kentucky Bourbon Red that will be proudly gracing the refrigerator. Little do the wee ones know that if Mommy bought the bird at the big chain grocery store, that seemingly beautifully roasted but flavorless bird at the centerpiece of the meal of gratitude is a pigment-impaired white, crippled, saline-fluid- and antibiotic-injected, beakless, genetically modified mutant — with augmented breasts so Partonesque that it has trouble walking on its own, and cannot breed. This commercial “turkey” lived its entire life in a concrete jungle compressed with thousands of other hostages. 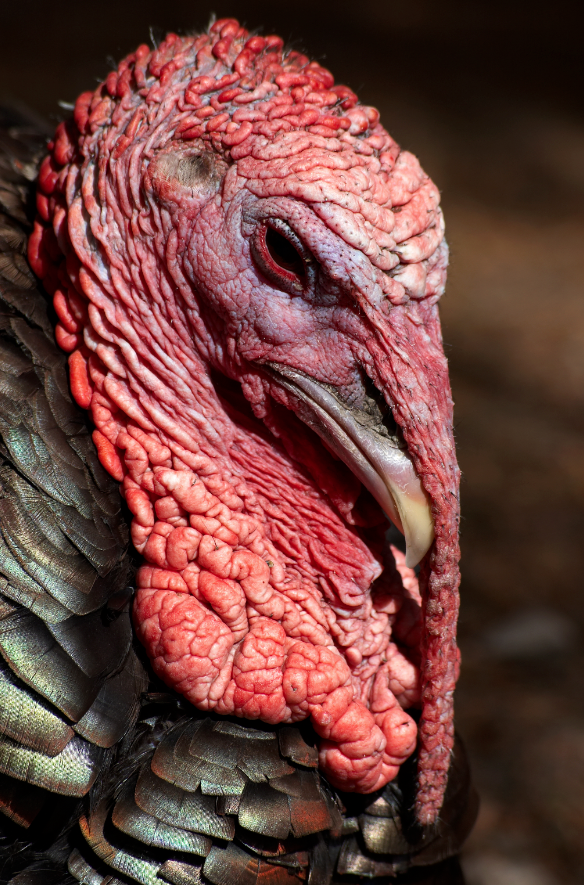 Want to create a vegetarian? Just show little Johnny a photo of a white turkey factory. The federal government’s Humane Methods of Slaughter Act excludes turkeys and chickens entirely, despite the fact that poultry accounts for 80% of the animals killed for food in the United States.

In dramatic contrast, the Kentucky Bourbon Red, a kissin’ cousin to the domesticated wild turkey (and the only native poultry breed in the Western Hemisphere) runs, flies, dances with fanfare, copulates and does all the activities nature designed a turkey to do.

Bourbon Reds have brownish to dark red plumage with white in the flight of their tail feathers. The neck and chest feathers are a deep chestnut mahogany and the under color feathers light buff to almost white. With a black beard and a throat wattle that starts out red and changes to a bluish white, it is quite a sight to see several dozen in flight.

“They gave me quite the fright the first time I came out to greet a foggy Kentucky sunrise and there were a dozen turkeys roosting on the sun room window sill, peering in, and another dozen lined up looking down on me from the roof of the house,” he said.“It was like they were guarding the fort. Very Hitchcock.”

Haffey is also inclined to believe that Bourbon Reds can “sex” other species, including humans. “Whenever a woman would go to visit the barnyard, the males would puff out and begin parading. Then the hens would surround, close in and block her movement. I had to start keeping the dressage whip at the readies by the door to hand to my daughter on her way out to feed.”

Until the 1950s, when the federal government began subsidizing industrial agriculture in earnest, and genetically modified, Roundup-sprayed corn and soybeans were widely grown for animal feed (and genetically modified and processed food began replacing naturally edible fruits and vegetables for little Johnny), the Bourbon Red had been America’s Thanksgiving turkey. 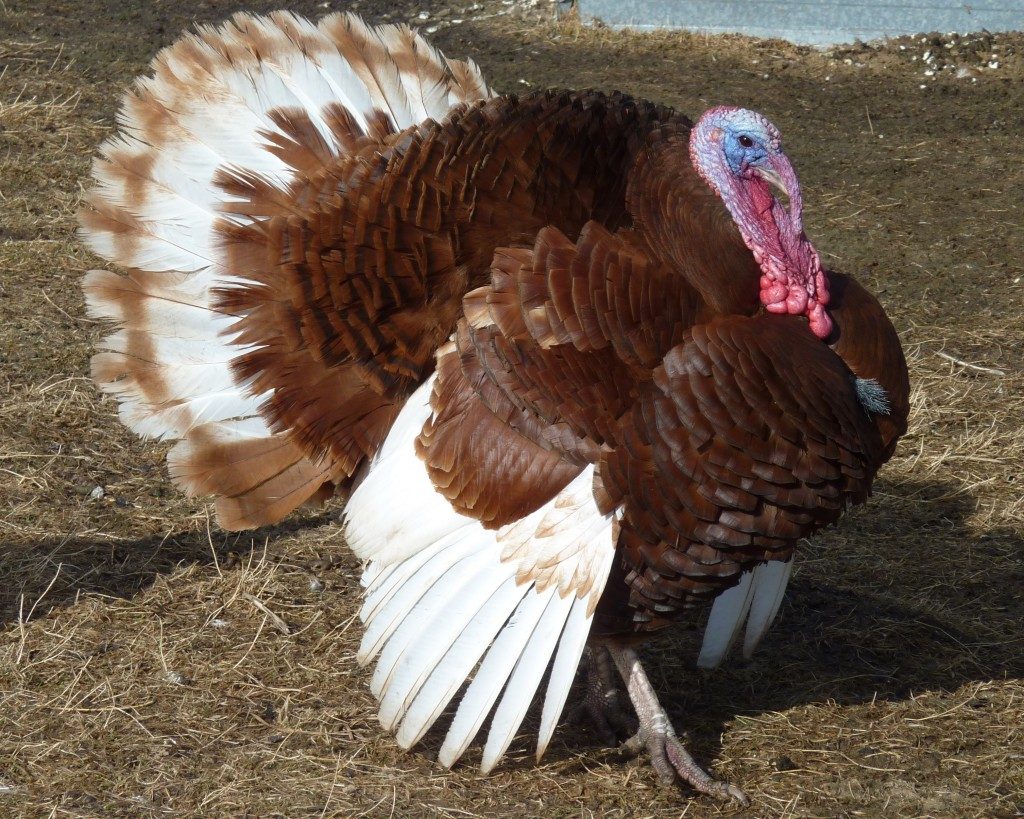 Having been recognized by the American Poultry Association since 1909, the variety was created and perfected by John F. Barbee of Bourbon County, Kentucky. The first published reports of the Bourbon Red “winning the prize” can be found in the tell-all Friday edition of the Bourbon County News, February 19, 1897: “John F. Barbee exhibited 14 turkeys and chickens at Louisville last week and was awarded prizes on every show made.” We like to imagine that Barbee had been sipping on a fifth of Old Crow neat (the pre-1856 formula) prior to trotting those turkeys with a harness and lead in circles around the show ring.

In the 1770s, in between riding back and forth from their own farms and creating a central government and defense strategy for the 13 originally British colonies, members of Congress had to come up with a branding, marketing and P.R. strategy for “The United States of America.” In what was to be a six-year debate, the turkey was just a few votes shy of being named America’s national bird. Benjamin Franklin, founding father and fellow bourbon sipper, was the turkey’s chief lobbyist and he was sorry to see the title instead go to the bald eagle, a creature he deemed a taker and a looter.

In 1784, Franklin penned a letter to his daughter, Sarah, in which he expressed his opinion about the rejection of the turkey for the selection of the bald eagle, a “bird of bad moral character [that] does not get his living honestly.… For the truth, the Turkey is in comparison a much more respectable bird, and withal a true original native of America. He is besides, though a little vain & silly, a bird of courage, and would not hesitate to attack a Grenadier of the British Guards who should presume to invade his farm yard with a red coat on.”

As far as being “the chosen one,” the Bourbon Red, can count itself as having been brought in twos onto the Ark — that is to say, the Slow Food USA Ark of Taste. The Ark is a living catalog of more than 200 piquant or exquisitely flavorful and culturally significant indigenous food items that are in danger of extinction.

By promoting the Bourbon Red and other food on the Ark, Slow Food hopes to encourage the production of the Ark items, so that they can survive and be savored by everyone. By consciously choosing to purchase and eat items from the Ark, our demand keeps the Ark food in production and promotes the small farmer, as a vital part of the food chain. Voila! The definition of community sustainability and the Slow Food mantra: “The best way to save food is to eat it.”

Due to consumer demand, the dedication of small farmers, Slow Food movement leaders like Patrick Martins and the resurgence of writers like Wendell Berry, the availability of real or heritage food is growing by leaps and bounds. 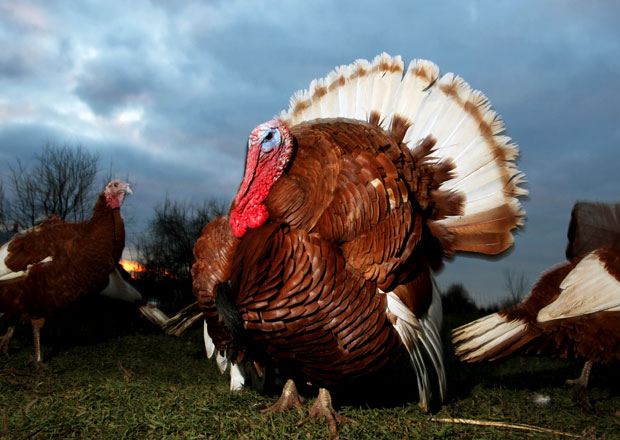 The heritage turkey movement got a big boost in 2001 when Martins founded, the American affiliate of the ongoing Slow Food International, based in Turin, Italy. Believing that “the best way to help a family farmer is to buy from him,” Heritage Foods USA began as the marketing arm of Slow Food USA’s Ark project. The first Ark products to be sold were heritage turkeys raised by the foremost breeder of heritage poultry in the nation, Frank Reese, of the Good Shepherd Turkey Ranch in Tampa, Kansas.

On Thanksgiving 2002, about 800 heritage turkeys were sold to Slow Food members around the country. Today hundreds of farmers raise heritage turkeys. As a result, numerous breeds have been removed from the critically endangered species list. The Bourbon Red has since gone from the “endangered” to “watch” status.

Heritage or Slow Food turkey purveyors are a passionate lot, believing that our very souls depend on getting back to the land. Kathy Wheeler of Star Farm in Hart County, Kentucky, whose farm slogan is “Bourbon Red Turkey: A Kentucky Heritage Worth the Tradition,” says “My life has never been the same since I began my quest to not only provide a quality product to consumers, but also to educate people of Kentucky of their very own heritage turkey — the Kentucky Bourbon Red. I have made it my goal to keep this wonderful heritage breed alive and thriving. There is no doubt that raising this heritage turkey has completely transformed everything about us, the farm and our outlook on what we eat.

by Heather McKeeve, Edible Louisville
Originally published on Slow Food USA.
Heather Boone McKeever is the chair of the Slow Food Lexington KY chapter, a heritage farmer and an attorney.