Slow Food Italy’s congress in Montecatini Terme signaled the arrival of a new committee and a freshly defined focus: The fight against all kinds of environmental, human and social exploitation in the agricultural production system will guide the mandate in Italy from now until 2020

“The ports of our seas are being closed to migrants, leaving warships undisturbed,” said trade unionist Aboubakar Soumahoro at the congress. “But 5 million migrants are 8% of the Italian population, and the same number of young people has left the country to work abroad. Today they close the ports to migrants, what if tomorrow the airports are closed to them?”

“We are seeing our association go through a historic phase that will set the path for an extraordinary future, in Italy as in the world. The Chengdu Declaration, ratified in China in October 2017, put forward motions for our new direction, and represents a vital spark that has renewed enthusiasm in all the places where Slow Food is present and where its activities have been at the center of important initiatives. Ever since, in all of our convivia, in all the regional congresses, within our national council, the words renewal, inclusiveness, openness, listening, smile, willingness, have all acquired new force in dialogs and discussions and they must continue so that our Italian network can present itself properly at the next International Congress in 2020.”

With these words, the seven members of the new Executive Committee of Slow Food Italy introduced themselves to the 650 delegates who had gathered in Montecatini Terme for Slow Food Italy’s 9th National Congress.

“We will undertake to adopt the themes of the motions, the documents and the contributions that have arrived from all over Italy during the congress relating to migration, the fairness of the food we eat, support for the youth network, social agriculture, environmental regeneration and sustainable mobility as well as the fight against all kinds of environmental, human and social exploitation in the agricultural production system in Italy. Our way of looking at biodiversity has always been unique, and continues to be so, when compared with the many associations and organizations that work to preserve biodiversity, many of whom we collaborate with and will continue to collaborate with more and more. This wealth must be the focus of our activities through our Presidia projects, the development of the Earth Markets and the consolidation of the Chefs’ Alliance network, as well as the strengthening of local networks and addressing the issues that are playing a key role in our country, particularly in areas with very particular fragilities. This commitment must appear even more strongly in the area of international campaigns, like the Gardens in Africa project, the climate change campaign, which has required careful planning, starting from our local areas then taking it to a global level.”

Click here to read the whole text of the speech (in Italian).

Gaetano Pascale, the outgoing president of Slow Food Italy, formalized the handover to the new Executive Committee. “You have two demanding years ahead of you. All the members must thank these people who will certainly gain a lot of satisfaction, but whose burdens and responsibilities will be greater than the honors we bestow upon them today and that they may receive in the future. We must be there for them, with care and attention, because our commitment also requires their sacrifice. I will always be here to support you in whatever you do. You are extraordinary for having taken on the responsibility of the association at such an important time. We will do much together, with all of these wonderful people who are here today and those who could not make it. Thank you and I wish you all the best for your work!”

The seven new members, called upon to lead the association in the process of renewal that will lead up to the Slow Food International Congress in 2020, bring diverse experiences to the Italian Slow Food network:

Massimo Bernacchini, 50, lives and works in Orbetello, where he is active in cooperatives in the fishing industry. He has been a member of the Slow Food Tuscany regional committee and a national councilor.
Giorgia Canali, born in 1986, lives in Cesena where she works as a journalist. In 2010 she was elected convivium leader and has contributed to the development of the association’s youth network in Italy.
Antonio Cherchi, age 63, originally from Sassari, lives and works in Modena. From 2010 to 2014 he was the president of Slow Food Emilia-Romagna, and since 2015 he has been the treasurer and a national councilor.
Silvia De Paulis is an agronomist who since 1998 has worked in the Gran Sasso and Monti della Laga national park. After the 2009 earthquake that devastated L’Aquila, she helped set up first the 10 Gardens for 10 Tent Cities project and then a farmers’ market.
Giuseppe Orefice, a food technologist, is 42 and since 2014 has been an educator in the Orto in Condotta project and a Master of Food instructor. He is the outgoing president of Slow Food Campania and Basilicata.
Gaia Salvatori, born in 1989, is a member of the Slow Food Rome youth network. She graduated with a degree in communication in 2012 and has a postgraduate degree in marketing. She has worked with Slow Food in Chile to develop the Earth Markets, and currently helps to run a productive conservation project in the Amazon in Peru.
Francesco Sottile, an agronomist, teaches biodiversity and agricultural crop quality at the University of Palermo. He began working with Slow Food 20 years ago on the Sicilian Presidia and now collaborates extensively as an expert, in Italy and abroad.

Among the speakers on the last day of the congress, was trade unionist Aboubakar Soumahoro, who brought greetings from the workers from the Gioia Tauro plain and Puglia and from Cuneo’s farm laborers. “Some continue to look for work, some already have a job but are treated like slaves and some are told they do not have the right to a better future. But before talking about the future, we need memory: Listening to the delegates yesterday I remembered my childhood, the village in which I was born in Côte d’Ivoire, where we didn’t go shopping at the supermarket. Everything was there: We ate what we grew, the seeds were ours and were not forced on us by anyone, you knew their quality. Primo Levi said that we live in a constant war with memory. This war says that we do not have a past and that the present must be must be made of hate towards the other, in a country in which the ports of our seas are closed to migrants, leaving warships undisturbed. They continue to say that we are invaded by migrants, but this is false. We have 5 million people who have come from other parts of the world, not for some unknown reason but because they are fleeing from climate change, from war. But all is not lost: There are many people, many young people who are not taking the megaphone of hate to attack the poorest. The response must be to restore food sovereignty and social justice to those who are suffering the most. The real problem in Italy is not the refugees: There are 7 million poor who don’t take it out on the migrants. Our present is made of light and hope, of men and women like you and together we can bring this ship Italy to the shore without anyone drowning. Together!” 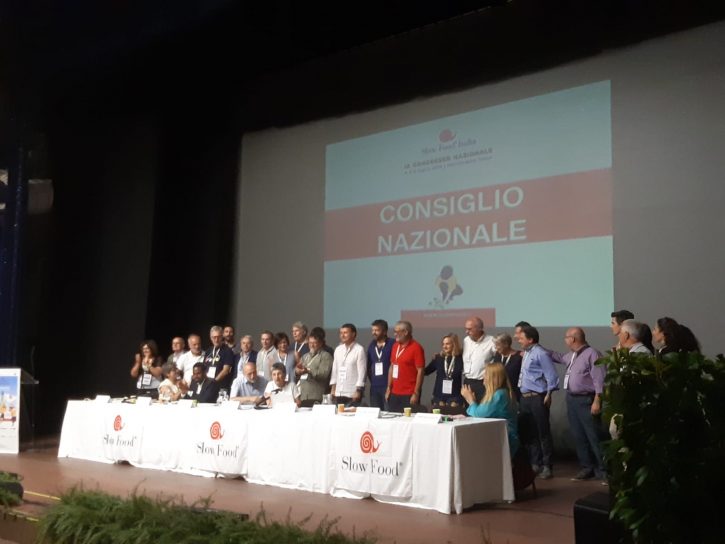 The audience was also inspired by the words of a University of Gastronomic Sciences student, Muhamed Abdikadir, known as Mudane: “I’m both unlucky and lucky at the same time. Unlucky because since when I was born I have never seen peace in my country, Somalia, because I don’t know what day I was born, because I grew up in anarchy and hunger. But I am lucky because since 1991 I have had a lot of help from an Italian NGO, help that many other children did not have. I was able to study and now I’m doing a Master at the university in Pollenzo, something that no other Somali has been able to do. I have been lucky also because I have lived a third of my life guided by the Slow Food philosophy.”

Montecatini Terme’s councilor for production, Helga Bracali, gave her greeting to the thousand delegates, observers and guests who had gathered for the Congress, in the name of the town council: “Thank you for having brought color to our town. Slow Food’s presence in Montecatini Terme is an incredible opportunity for us. I hope you will all bring home happy memories of us and the town and I hope that the partnership with our area continues, because it is wonderful to hear that we are a town that suits you. This is why we like to welcome Slow Food in the Valdinievole area. We look forward to seeing you again on October 13 for the national Slow Wine presentation and tasting. We will once again welcome the Snail under our roof.” 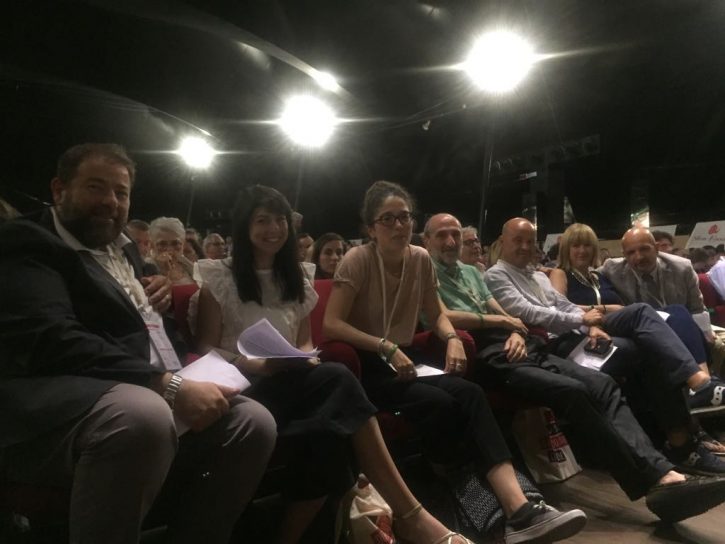