On May 15, as part of his official visit to China, Italian Prime Minister Paolo Gentiloni met with the coordinators of Slow Food Great China.

The chair of Slow Food in the country, Madame Qiao Ling, along with representatives from the Chengdu Municipal Trade Commission, Beijing International Design Week and the Liang Shuming Rural Reconstruction Centre and entrepreneurs from the provinces of Gansu, Hangzhou and Beijing were at the Italian Embassy to welcome the premier.

Slow Food, an international organization active in 160 countries around the world, has been seeing rapid developments in China. Officially formed in January 2015, in September that year it organized the Slow Food Beijing Festival and in 2016 sent a large delegation to Terra Madre Salone del Gusto in Turin along with 60 Chinese products that have joined the Ark of Taste* so far. 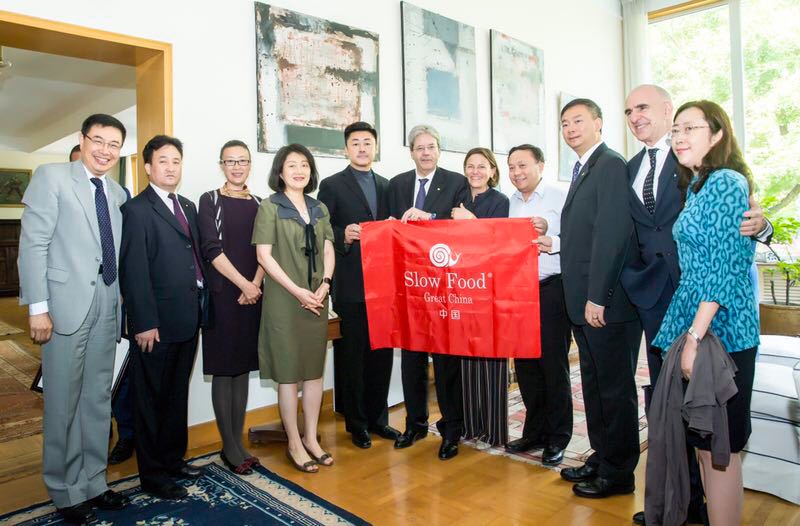 Slow Food Great China is now looking forward to the Slow Food International Congress, which will be held from September 29 to October 1, 2017, in the Chinese city of Chengdu, in the province of Sichuan. Held every four years, the International Congress is a key moment in the life of the Slow Food movement, ratifying its direction in terms of policies, finances and organization at an international level, and consequently also national, regional and local. The gathering in Chengdu will be attended by 400 delegates from 90 countries.

At the meeting in Beijing, Prime Minister Gentiloni expressed how pleased he was to see the spread of Slow Food, which began in Italy 31 years ago and has since put down roots around the world. The Slow Food International Congress will be an important event, testifying to Italy’s close cultural connections with China.

This country has a crucial place in the world’s food system and, in Slow Food’s global vision, can play a decisive role in saving the planet’s food biodiversity and taking a stand on major issues like climate change, in which agriculture is an important factor.