Archive » The Other Palm Oil

Every day we eat invisible foods: ingredients lurking for the most part in processed industrial products. Did you know, for example, that corn may be found in your daily bread, a hamburger, margarine or sweets? Global crops like corn are used so widely it’s hard to keep track: corn flour, corn starch (used to bulk up hamburgers), hydrogenated oils to replace butter and fructose syrup to substitute sugar. And it is the same story for many other ingredients such as soy and palm oil.

These products no longer have anything to do with the land from which they originate or their history. To illustrate this, let’s consider the origins of palm oil and what it has become today.

Palm oil originates in Western Africa, where the oil palm trees were domesticated in the forests of Guinea Bissau and Sierra Leone thousands of years ago. Still today, the communities here harvest the large clusters of red berries from both wild and cultivated plants, and process them using traditional methods to obtain a dense orange colored oil, with aromas of tomato, fruit and spice. Tasty and nutritious, in particular thanks to the presence of carotene and vitamin E, the oil is fundamental to local cooking and is also used in traditional rituals.

Easy to produce, adaptable and profitable, palm oil became sought after on international markets during the industrial revolution. From the end of the 1800’s, countries in the Far East started to invest heavily in the product and by 1966 they had overtaken as its biggest production area.

Indonesia and Malaysia have become the principal producers and, at an output of more than 45 million tons per year, today control 90% of global production. In the last 20 years the surface area dedicated to palm oil has tripled and millions of hectares have been deforested to make space for this intensive monoculture crop.

Yet, the palm oil that ends up in our food doesn’t have the slightest connection to the aromatic and dense sauce used to cook fish and vegetables in Guinea Bissau.

Industry bleaches it, refines it, breaks it up and hydrogenates it. And so, in supermarkets and kitchens we find a saturated fat that is flavorless and odorless, and which after having reeked havoc on the planet, is ready to compromise our health.

Slow Food is working to protect quality foods connected to places, people and environments, and is currently collaborating with FAO to support small-scale quality palm oil producers in Guinea Bissau to protect this exceptional product from the threat of food globalization.

In 2011 Slow Food launched the Wild Palm Oil Presidium to support small-scale producers of artisanal oil extracted from the berries of the traditional Dura variety in southern Guinea Bissau. Here, the exchange of knowledge between the Balanta, Nalus and Susu people has allowed the local communities to develop one of the best products found across the country. 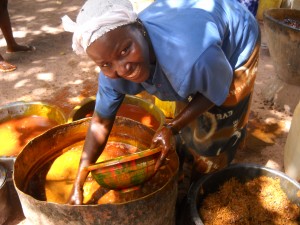 This project is supported by the Italian Development Cooperation – Ministry for Foreign Affairs and the FAO Fund for Food Security through the project “Inter Country Coordination for West Africa Food Security”.

Without a concerted effort, traditional palm oils, corn meals or soy products will be lost for good. Visit the new Slow Food Foundation for Biodiversity website site to find out more about our projects: www.slowfoodfoundation.org