Archive » Interview with Gilles Luneau on European Funds for Agriculture

Gilles Luneau, French writer, journalist, and director, has been dealing with globalization and agri-food issues for years, as well as the relationship between man-nature and city-countryside; he is the author of essays, investigations, biographies, and documentaries for French TV and for Arte, the Franco-German channel. He recently released his book, Steak Barbarian and an investigation into artificial meat and the economic interests that support vegan propaganda.

Gilles is a longtime friend of Slow Food, supporting our activities – especially in France, with kindness and availability, and by participating in various international events. From his home in Brittany, where he is working on the final stages of a documentary about how artisanal producers and conscious consumers in France reacted during the lockdown, and how they organized efficient short supply chains, despite the difficulties, he agreed to give us his point of view on the current prospects of the agri-food system, of the increasingly urgent change, of the lessons we must draw from the COVID pandemic, and which Slow Food wants to promote with the Communities of change. 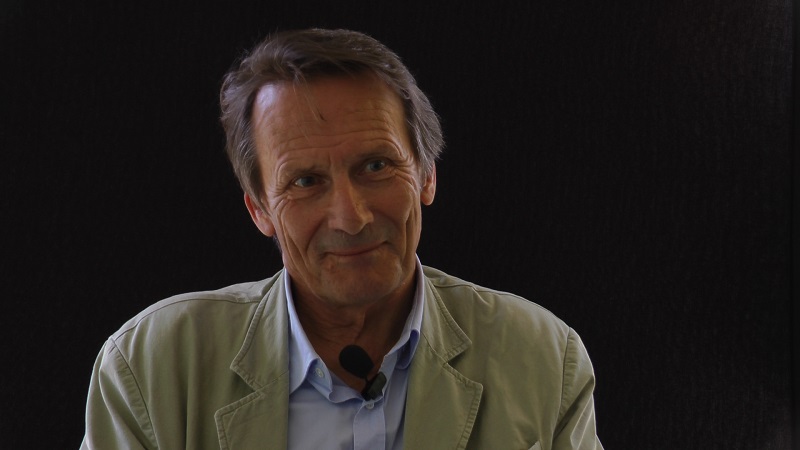 Do you think that the global agri-food system can change through policies, for example at the European level with the new Common Agricultural Policy (CAP)? How important is this lever to direct production methods toward real environmental sustainability?

We are late on the CAP. Before COVID it was deemed appropriate to postpone the vote, which otherwise would have seen an expiring parliament speak on such an important issue; then there was the health crisis, and now we cannot discuss agriculture without taking into consideration the link between zoonoses and deforestation, industrial farming, the consumption of fertile soil. Health, biodiversity, and climate are the three elements of the crisis, and the only way we know today to mitigate it is agroecology, that is, organic agriculture in polyculture-breeding.

Because we need hedges, groves, ditches, areas to be allocated, in the context of the greening envisaged by the CAP, to non-cultivation. We need permanent solutions that are respectful of animals, plants, and humans. We need all of this.

But how do you do it?

Based on my experience and my investigations, there are many rural communities ready to engage on this front, and there is a strong tendency to return to the countryside. I was also able to see it during COVID: many have moved from the city to the countryside, to live the quarantine closer to nature, and now they don’t want to go back, they try to organize a different life. They are between 25 and 40 years old, already active in society, and sensitive to the environment. They organize themselves into communities. Physical spaces, in which a community freely shares resources, skills, and knowledge have multiplied, frequented by young people who want to adopt an alternative way of life, for example in the production of vegetables. We have these communities and then we have what we call networks, open, connected with the territory.

Here, how do you make the link between territory and a local economy increasingly cohesive?

Today agriculture in Europe is done on a territory, by force of things, but it is designed to go elsewhere, abroad, or to the nearby city, not to feed the territory itself. Vertical technological thinking implies companies that collect production to distribute it in large quantities elsewhere. Re-territorializing means very concretely that the plus value of the whole supply chain goes to the territory and no longer on the boards of directors of large companies. Today we can give a legislative framework to all of this, with incentives to invest in companies in the COVID crisis: this money must be oriented, conditions must be set with respect to the climate, biodiversity, and the circular economy.

We are at a time when communities can enter the political debate because they have the solutions, they have been showing for years that we can do it, that we can live on sustainable agriculture with acceptable consumer prices. It will not be possible to respond to the challenge of zoonoses, the climate, and biodiversity by letting others (industrial agriculture, large-scale distribution) continue to pollute the planet.

It would be the goal of the Farm to Fork Strategy …

But the Farm to Fork is vague. It lists a number of good intentions, and doesn’t go into detail because it doesn’t want to anger anyone. Reforestation, carbon sequestration, and digitization are the three axes on which technological drift can occur, and we must be very careful that European resources are not diverted to this. If we want to sequester carbon, there is a simple answer: permanent grassland, polyculture-breeding. Agroforestry is another excellent answer, especially as regards soil fertility. Organic is also fine but it is not enough if it is only a commitment not to put synthetic fertilizers and pesticides; the agroecology approach reconciles the ecological framework with the needs of agriculture. And anyway, I repeat: the solution for CO2 is polyculture-breeding. A stable lawn is essential because it allows you to put herbivores on it, obviously with a balanced animal-surface ratio: the grass grows, absorbs carbon, then is eaten, grows again, is a permanent cycle. The lawn is surrounded by hedges and groves that promote biodiversity and help the hydrogeological balance.

We then come to digitalization: it suppresses employment and enlarges farms, it presents you with progress as putting the right dose of poison in the right place. This is not what interests us. As for reforestation, that is, the possibility for the polluter to offset their emissions by planting trees allows companies to re-account for their emissions and gives them an alibi to continue polluting. In short, in the Farm to Fork strategy, we talk about the conditionality of the aid. Well, we demand that they all be paid for interventions in favor of the climate, biodiversity, and health. Aid must be conditioned on respect for ecology and employment because so far the system has rewarded large companies that receive huge sums without any obligation, not even for production.

Therefore, political coherence with respect to the statements of principle to stop decoupled aid, if there is a measure of capital importance that we must claim, is this. Europe has always given conditional aid; well, if we want to help the climate, then we put as a condition the rotations of crops with legumes, the re-planting of hedges to fix the water, in short, the whole program that sustainable agronomy has very clear.

Then yes, we must set a maximum limit for aid (it is scandalous that there are people who take € 1 million) and a minimum threshold for small farms, and employment must be supported, rewarding companies based on the workers hired: large industrial farms have the objective of eliminating staff, instead of promoting rural employment creates a repopulation of the social fabric. These are common-sense proposals that can be adopted by all communities, on which mobilization can be activated. In short, if we continue as if nothing had happened, 9 billion will be wasted: after what we lived with COVID, we must change.

Can we hope that the change is already underway, that it comes from below?

In France, the short-chain has held. I made an investigation for France 3 in Nouvelle Aquitaine, the largest agricultural region in France, with an enormous production diversity. I went to see what was happening: more or less everywhere, there was no lack of food, in the city as well as in the countryside, nobody changed eating habits, rather they ate and cooked a little more. There were tensions at the beginning about flour and eggs because people bought too much for fear of being without … and then immediately people organized themselves, on the streets, by neighborhoods, telephoning, exchanging messages and looking for the farmer who could do of deliveries. There were people who collected legumes, others fish, and in fact, there were places where there was also a political battle the mayors had imposed to reopen the markets.

What had a great negative impact was the closure of restaurants and canteens, the latter in France must be mainly local and organic, therefore many producers have lost their sales channel. But overall, things went well. Where purchasing groups worked for 60 parcels, 400/600 were made during the quarantine … the short-chain has grown stronger. This is why I say that today we have the political opportunity to ask for this to continue and be supported.

In short, an agriculture that becomes an exercise in a democracy?

Agriculture created our civilization, made us sedentary, cohesive, created social structures. It is normal for agriculture to be thought of as the foundation of democracy. We have an opportunity: the political class today is disoriented, between the growth of the far-right and the failure to live up to the expectations of Europe. We can ask politicians from what we do, from what we have built, to tell them that we have the solution.

* Tiers-lieu is a term translated by The Third Place which refers to the social circles that come after home and work. It is a thesis developed by Ray Oldenburg, emeritus professor of urban sociology at the University of Pensacola in Florida, in his book published in 1989: The Great Good Place.