The Italian-French association “Mediterran: Our Way of Living” is based in San Salvario, the gentrifying and nightlife district of Turin. The project’s creators collaborate with Slow Food and carry out food education activities.

Pane Nostro opposes the constrained and dominant nutritional models, the disorders caused by the dietary imbalances, and calls attention to the need to rediscover the authentic Mediterranean cuisine.

“Because pleasure, health, beauty, and harmony are not exclusive luxuries dictated by dominant social models, but our most innate right to health.”

The festival wants to emphasize that what limits us are the food regimes and dietary restrictions which are aimed at controlling our pleasures: “Against the bodies that reduce man to a commodity, we should free our lifestyle from the idolatry of beauty and longevity.”

During the festival week, the association will offer free consultations by a nutritionist at his office in Via Goito 7.

For information and reservations: [email protected]

With the testimonies of migrants and their loaves they kept in their backpacks during their crossing. The activity ends with sourdough yeast making workshop by Andrea Bertino, owner of the homonymous pastry in San Salvario, in collaboration with Enò Libero Emporio Enogastronomico.

Discussing Predrag Matvejevic’s book: From the cultural revival of Turin to its San Salvario district, through intercultural meetings with children from the Mediterranean. With the Director of the Salone del Libro of Turin, Nicola Lagioia, and Simone Campa, of Arte e Tradizione. Following with “Music and Conviviality in the Traditions of Southern Italy”, with songs, putèca and party sounds with the musicians of “La Paranza del Geco”. A buffet by Enò Libero Emporio Enogastronomico.

“Our Bread”. Readings by actress and singer Linda Messerklinger.

Ancient Egyptians: From the loaves found in archaeological findings to the models with statuettes of blades. Conference and screenings by Egyptologist Olimpia Soleri, in collaboration with the Egyptian Museum of Turin. 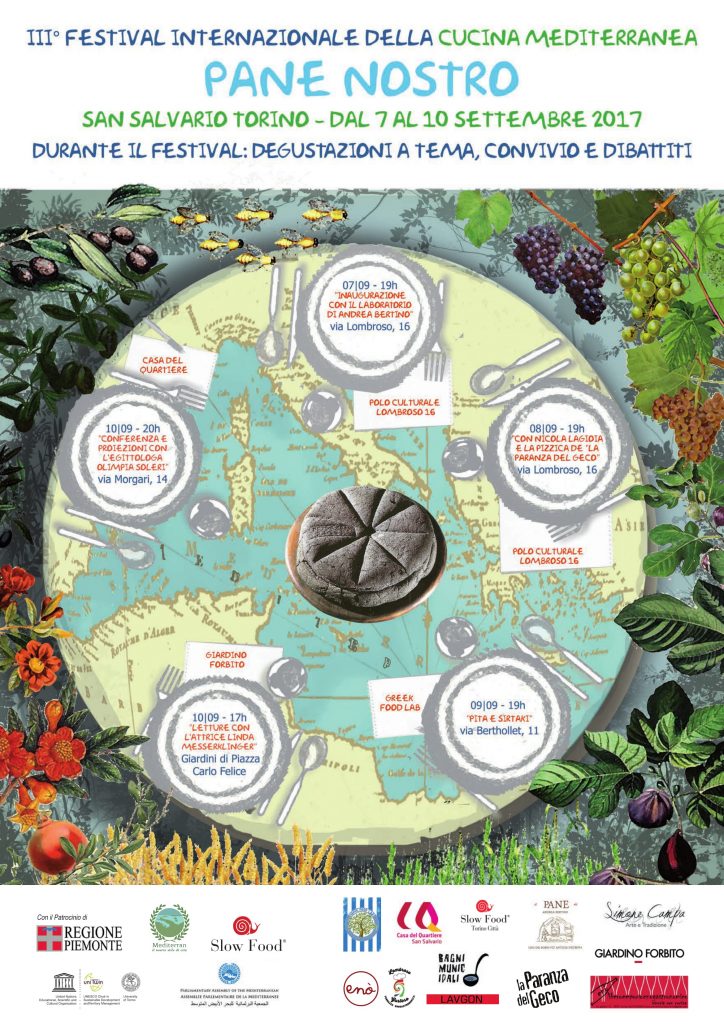