The national Indonesian organization of indigenous peoples, Aliansi Masyarakat Adat Nusantara (AMAN), estimates that between 50 and 70 million indigenous peoples live in Indonesia, accounting for up to 25% of the country’s total population. One of the main challenges facing these indigenous populations are access and rights to their lands, as private interests have caused catastrophic damage to the territories and natural resources that indigenous communities depend on.

Ahead of Indigenous Terra Madre Asia and Pan-Pacific, running from October 11-14th 2019 in Hokkaido, Japan, we spoke to indigenous delegate Imanul Huda, member of the Kapuas Hulu Slow Food Community in Indonesia. In our interview, Imanul discusses his involvement with Slow Food and his work to protect natural resources and sustainable food sources in the Kapuas Hulu District in Indonesia, by helping indigenous communities obtain management rights to their villages’ forests.

He is among the 200 indigenous leaders from 27 different countries who will gather at this year’s Indigenous Terra Madre to share traditional knowledge and raise awareness of how indigenous peoples’ sustainable food systems can play a key role in addressing global challenges like climate change and world hunger.

Could you tell us a little bit about yourself and what Indigenous Terra Madre (ITM) means to you, as someone who works with the community to protect natural resources and sustainable food sources?

I was born 50 years ago on one of the big islands in Indonesia called Kalimantan (Boneo), in West Kalimantan Province. This province accounts for 9 million hectares of forest area, 20% of which is located in Kapuas Hulu Regency. The forests in West Kalimantan are not only home to various species of trees and wildlife, but also to people who live in and around them. 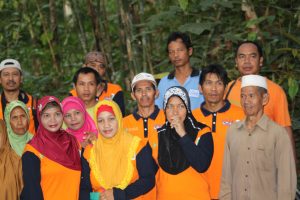 The community uses forest resources to fulfill their daily needs, including as a source of sustainable food. However, local communities do not have the authority or rights to be able to manage the forest themselves. In the beginning, forest management rights were only owned by the state and companies, while the community was only a spectator. I, along with several friends, are concerned about forest sustainability and community welfare; we encourage and facilitate the acquisition of forest management rights in the village and strengthen the capacity of the people in the community so that they can manage their resources sustainably in accordance with existing regulations.

Currently, of the six villages in Kapuas Hulu where this facilitation is in place, there are already four that have succeeded in obtaining management rights to their villages’ forests through the Village Forest Management Plan, with areas varying from 345 hectares to 4,165 hectares. However, two other villages are still struggling to obtain their management rights, because the forest area of their village is company-owned, through an Industrial Plantation Management Business License (IUPHTI). The company’s activities threaten not only the sustainability of food sources in the community, but also the availability of clean water in the village. 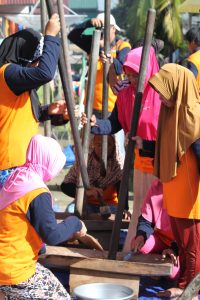 You are based in Kapuas Hulu District, West Kalimantan. Is there something specific about the geography of this area and its natural resources?

Kapuas Hulu is one of the districts in the province of West Kalimantan located in the Heart of Kalimantan Island. The topography of Kapuas Hulu Regency varies from low-lying areas with lakes and swamps to areas that have an altitude ranging between 25 and 500 meters. This region has been designated a conservation district since 2013, of which 55.61% is a conservation area. Topographically located in several upper reaches of the river, this area is a water tower for the life of the community downstream. Kapuas Hulu has also been designated as a Biosphere Reserve Area with a total area of ​​3 million hectares, of which Betung Kerihun National Park and Danau Sentarum National Park are core areas.

How did you get involved with Slow Food Community Kapuas Hulu and Slow Food Ark of Taste?

Since 2013, a number of my friends and I have helped the community in Nanga Yen Village, Kapuas Hulu in the conservation of the Tengkawang tree. The fruit of the tengkawang tree has seeds commonly used by the community to be used as vegetable fat for consumption of oil substitutes. In 2015 we were visited by Slow Food International and Slow Food Indonesia to see the field conditions and talk with the community. Then I became a member of Slow Food (2016). Together with the community in Nanga Yen Village, we submitted a proposal to add the Tengkawang to the Presidia and Ark of Taste. Since then, Tengkawang Fat had been added to the Ark of Taste.

In 2018, we were introduced to a community-based Slow Food organization. Together with community representatives from several villages actively protecting their forests, we discussed this opportunity. We see the Slow Food Community as an opportunity to reach a wider network, which is one of the reasons we finally established ourselves as a Slow Food Community in August 2018.

What are your hopes and expectations for Terra Madre Indigenous in Sapporo, Japan? What do you think should be the focus for Indigenous Terra Madre and Slow Food networks in the future?

First and foremost, I am eager to discuss, exchange, and learn from many different people from all over the world who have the same vision to protect natural resources and use them sustainably for the community. For future Indigenous Terra Madre and Slow Food networks, the first goal should be to continue strengthening the network through various information exchange efforts among the different members. Secondly, it will be important to determine the best way to assist members in promoting efforts to protect natural resources and local food sources.