Archive » In Memory of Alex Podolinsky, Pioneer in Biodynamic Farming 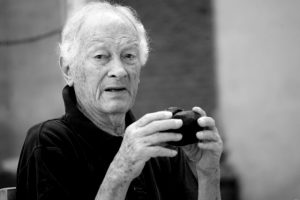 Alex Podolinsky was a travelling man. Born in a Ukrainian family, two world wars would take him through Switzerland, England and Germany only to end up in Australia, on the run from the Stalin regime. Down under, he dedicated his life to the virtues of a biodynamic agriculture that was deeply inspired by Rudolf Steiner, but revisited to suit the Australian conditions. He later travelled the world to share his knowledge and success story. On Sunday June 30, just 15 days away from his 94th birthday, Alex Podolinsky went on his final journey, due to a stroke.

In 1953, Alex founded the Biodynamic Agricultural Association of Australia (BDAAA) and his conferences started to inspire hundreds of farmers to take on a path outlined by observation, responsibility and rejection of chemicals. Under his consultancy, for which he asked nothing in return, the farms he visited saw tremendous development in the man-earth-animal-plant complex. “We farmers remembers him like a father, with deep affection and gratitude” says biodynamic farmer Saverio Petrilli from Italy.

The merit of Rudolf Steiner lies first and foremost in his suggested use of preparations, perfected by scientist Ehrenfried Pfeiffer, meant to activate the soil’s fertility and its vital forces. Alex Podolinsky, however, developed a use that was applicable to greater agricultural surfaces, and because of him more than a million hectares are cultivated in this way, in Australia alone! Today, farmers all over the world keep on practicing his ideas, eager to prove that a dynamic and extensive agriculture is possible far beyond the small-scale we usually associate with this technique.