Archive » The Importance of Feeding Animals

Some feed them with wheat, rye, grass, lucerne and cooked apples; other with potatoes, wheat and barley. And the results are interesting: the meat of free-range pigs has been proven to be considerably superior to that from industrial production.

“The percentage of Austrian pigs raised organically or outdoors is shamefully low, well below 1%,” says Karl Schardax, a pig farmer from Upper Austria. Bizarrely, he says, “people want proper farms, they donate to projects run by organizations like Vier Pfoten, but when they do their shopping, they put the cheapest meat in their cart. That’s what we need to work on.” And that is exactly what Karl is doing, working energetically with other colleagues who share his ideas. 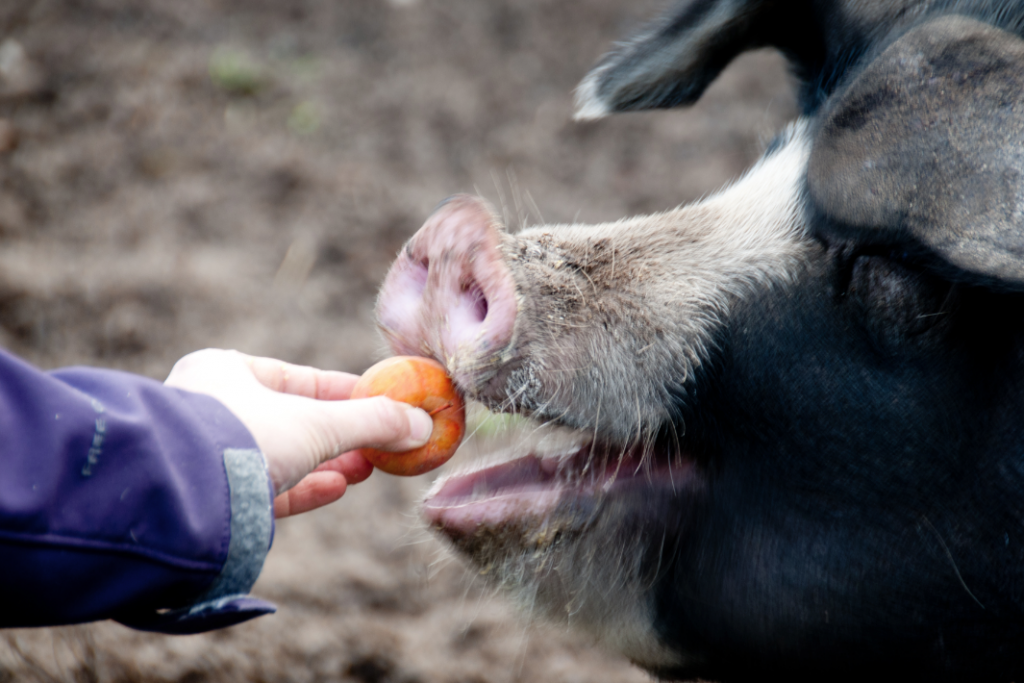 Animal diet and well-being
The pioneering breed changing pig-farming methods is the curly-haired Mangalica. The name covers three varieties: red, blonde and swallow-bellied (dark with a white belly). The Mangalica breed has Hungarian-Pannonian origins and is accurately though not very appealingly defined as a “lard pig.” Unfortunately, this creates an image problem for the breed, as today’s consumers want lean meat, ideally without a trace of fat, even though the fat of Mangalica pigs has been shown to be better for cooking and for health than lard from their pink relatives. Mangalica fat is full-flavored, hazelnut-scented and rich in Omega-3 fatty acids.

A growing number of people are dedi- cating their life to this breed, including Christoph Wiesner from Arche De Wiskentale, in Göllersdorf. His whole family helps feed the pigs. Alongside wheat, rye and alfalfa, the pigs are also given cooked apples, which are more digestible and offer a better use of energy. “You can definitely tell the difference in the meat’s flavor,” asserts Christoph. To spare the pigs the stress of a long journey, the Wiesners slaughter them at the farm, where the meat is also sold.

Andreas Felleis and Patrick Knittelf- elder, of the Salzburg gastronomic and culinary network Felleis, Knittelfelder & Thunfisch, have taken a slightly different path. They needed to supply pork of the highest quality to their hotels and restaurants, and so acquired their own Weideschwein pigs. The result was a cross between the Schwäbisch-Hällisch and Duroc breeds, hardy pigs that provide pork and fat of reliably good quality. The animals are fed potatoes, wheat and barley. Corn and soy are banned. This is something on which the Knittelfelder family and the Wiesners agree: A diet based on corn weakens the structure of the fat and makes it yellow. The Weideschwein pigs have 11 to 12 months to reach the right weight for slaughtering, which takes place nearby.

The Research Institute of Organic Agriculture (FiBL) recently organized a blind tasting of cured lard and prosciutto. The results showed that the free-range pigs were much superior to those that were industrially farmed. However, it also emerged that not everything or- ganic is outstanding. Artisanal slip-ups arebecomingincreasinglyperceptible, with the commendable exception of the producers mentioned here.

Production costs and national consumption
The Austrians eat 500,000 tons of pork a year; equal to 38 kilos a head. After Spain and Denmark, the country is Europe’s third-biggest pork consumer. A farmer can earn between 160 and 170 euros from an unslaughtered 120-kilo pig. Even though Austria has the resources to cover domestic demand, around 2.5 million pigs are imported and then exported. Production costs are lower in Denmark and northern Germany. This is due to wholesale feed costing less, and the slaughtering and butchering facilities employing workers from former-Soviet countries for very low wages. In Germany, an already-butchered pig might be sold for 30 euros less than in Austria.

by Jürgen Schmücking
Thanks to Barbara van Mele for her help with writing this article.