On a sunny morning in Genoa on Friday May 10, Gabriele Volpato of the University of Gastronomic Sciences presented a stark and incisive lecture on the complex relationship between fishing and climate change.

A number of factors were taken into consideration, with a special focus on the combined effect of rising temperatures and dwindling fish stocks on coastal communities in West Africa.

The data regarding carbon dioxide emissions can be so disturbing that we try to avoid thinking about it. But a refusal to confront the seriousness of the problem is not much better than denying the problem exists. Yet it’s just one of the ways that we’re changing our ecosystem, along with pollution, mechanical habitat destruction, the introduction of organisms into non-native environments (accidentally or otherwise) and of course, fishing. 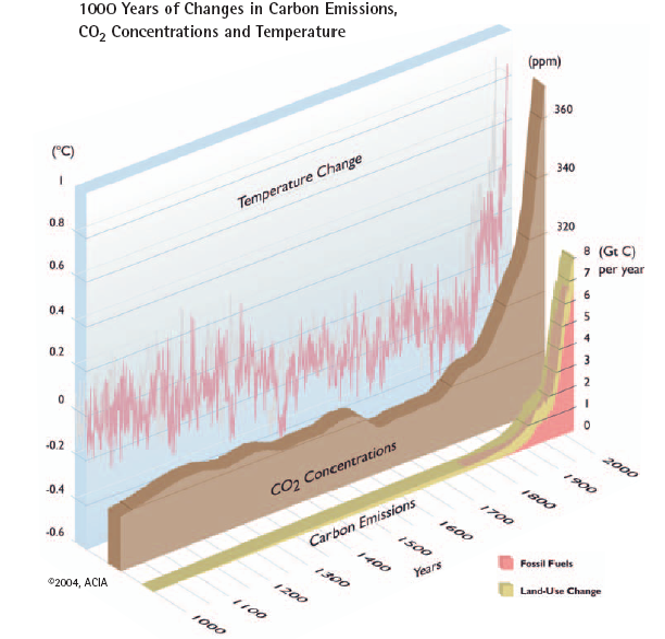 The marine ecosystem is facing a barrage of threats, not least because the oceans absorb around a third of our carbon dioxide emissions. This is causing them to warm, and as Volpato points out, fish are migrating in order to find cooler waters. The effect of this change in their migration patterns has an impact on all their ecological interactions, on biodiversity, and on the ecosystem services that nature provides. “Human communities are dependent on these ecosystem services for their survival: their production of biomass, their ability to sequester carbon dioxide and their protection of coasts from erosion.”

A symbolic and significant example of ecological imbalance is found in the coral reefs. These rich and complex ecosystems are famous for their beautiful colors, which are the result of a symbiosis between coral polyps and zooxanthellae, a sort of algae. The algae are what gives the coral reefs their color, but they cannot survive in water which is warmer than 29°C. When the water becomes too warm for them, they abandon the polyps, causing the increasingly widespread of phenomenon of coral bleaching. The effects on coastal communities are devastating. As havens for marine life, coral reefs are an important support system for marine biodiversity, as well as being a physical barrier which protects coasts from erosion. 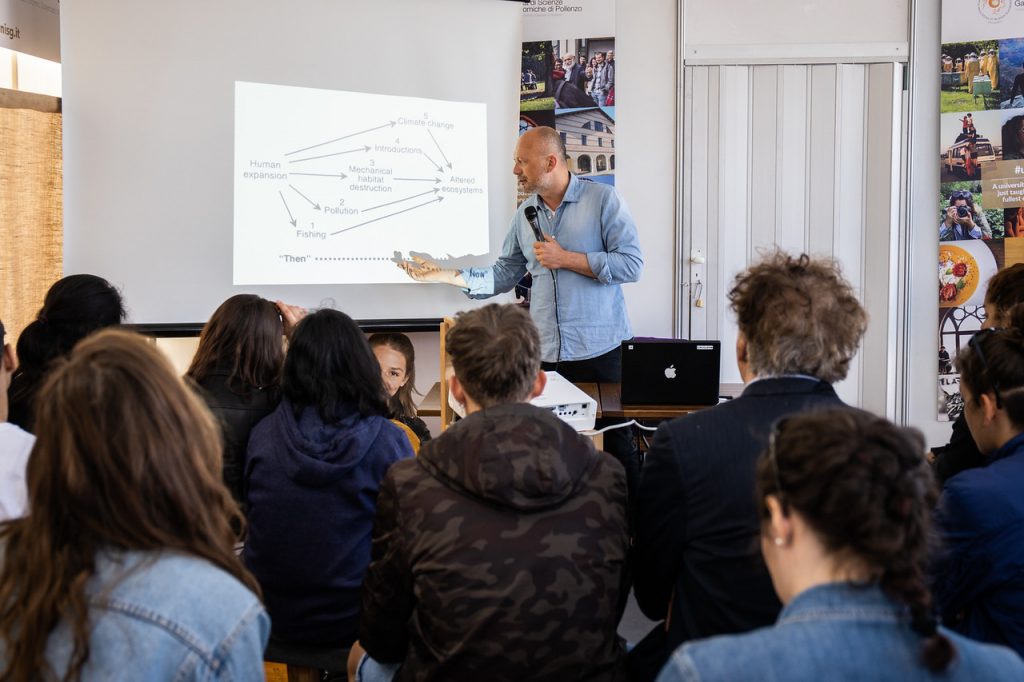 “The absorption of carbon dioxide also contributes to the acidification of the oceans,” continues Volpato. “The acidity of the sea surface is rising between 10 and 100 times faster than at any point in the last 50 million years, depending on which area of the world you measure. This causes marine creatures—from plankton to diatoms, and shellfish to coral—to lose their ability to produce a shell and other body parts.”

AN UNEXPLORED WORLD IN RETREAT

What makes marine biodiversity loss even more tragic is how little we know of it: as much as 95% of the world’s underwater environments remain unexplored, and scientists estimate that there are hundreds of thousands of species yet to be catalogued. “As many of them live in the deep, and are used to temperatures close to zero, we risk causing the extinction of species which we didn’t even know existed.” This is what happened in the last mass extinction event on this planet, when life in the oceans was close to wiped out. “We’re at the dawn of a new mass extinction event, the first in history to be caused by a single species: us.” 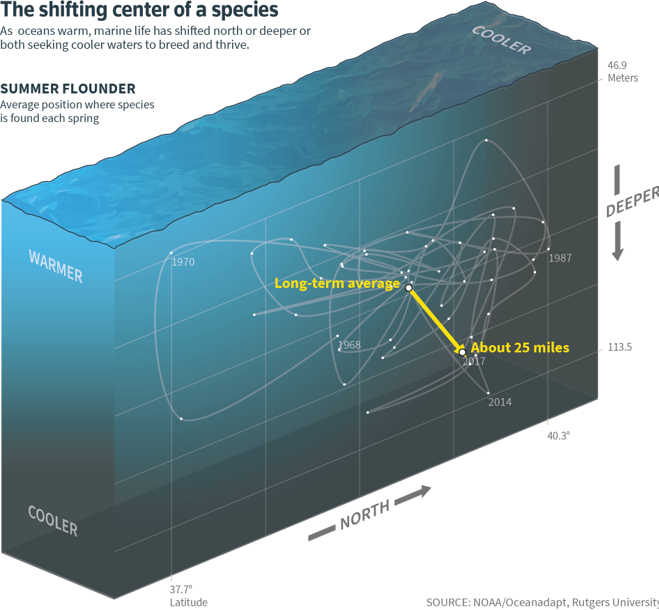 Monitoring of 70 different species in the North Atlantic has revealed that more than 80% of them have either moved further north or into deeper water in the last 50 years, with consequences for the entire ecosystem. It also has effects for fishers, who fish further from port and deeper underwater in order to satisfy ever-growing demand. This in turn pushes prices up. It also renders obsolete a lot of quota rules which stipulate what percentage of a catch may be exported, as total catches collapse.

In the Mediterranean Sea mackerel is becoming harder to find, while invasive species like the yellow barracuda flourish, and cephalopods and jellyfish represent a growing proportion of biomass. As Volpato explains, “we must adapt our consumption habits to this new reality. The mahi-mahi is regularly found now in the northern Mediterranean, and we’d be wise to start eating this, rather than threatened native species.”

CRISIS OFF THE WEST AFRICAN COAST

Off the coast of West Africa meanwhile, the sardinella population is on the move. This fish is rarely eaten directly by Europeans but forms an important part of the diet for local people. Unfortunately for them, it’s a major component of the fish meal used on salmon  and shrimp farms and other intensive fish farms, where three kilograms of fish meal are required to raise a kilogram of salmon. The sardinella is a seasonal migrant and moves up and down between Senegal and Morocco during the year, but its general range has shifted by 300km to the north since 1995. At the same time, factory trawlers from Europe and China plunder the seas. Each of these factory trawlers can take as much in one day as a fleet of 56 pirogues in Mauritania take in an entire year. The dead bycatch created by these factory trawlers is equally shocking, being equal in one day to the annual consumption of fish by 34,000 people in Mauritania. Some of the fish caught in West African is then sold on to other countries at low prices, undercutting the local fishers and putting their livelihoods at risk too. “This industrial fishing pushes fish stocks to collapse and threatens the food security of coastal communities,” as Volpato puts it.

This is nothing less than a crisis for African fishers, many of whom choose to emigrate to Europe because of their inability to make a living or feed their families through fishing. And even if we don’t see the fish that European boats have stolen from Senegalese waters directly, we’re still eating it in the form of salmon. Volpato summarizes with a cutting observation: “When we see an African migrant begging for money in front of a supermarket here in Italy, we should consider that he may have been a fisher, he may be a victim of the products inside that very supermarket. Industrial fishing is actually creating more hunger in the world.” 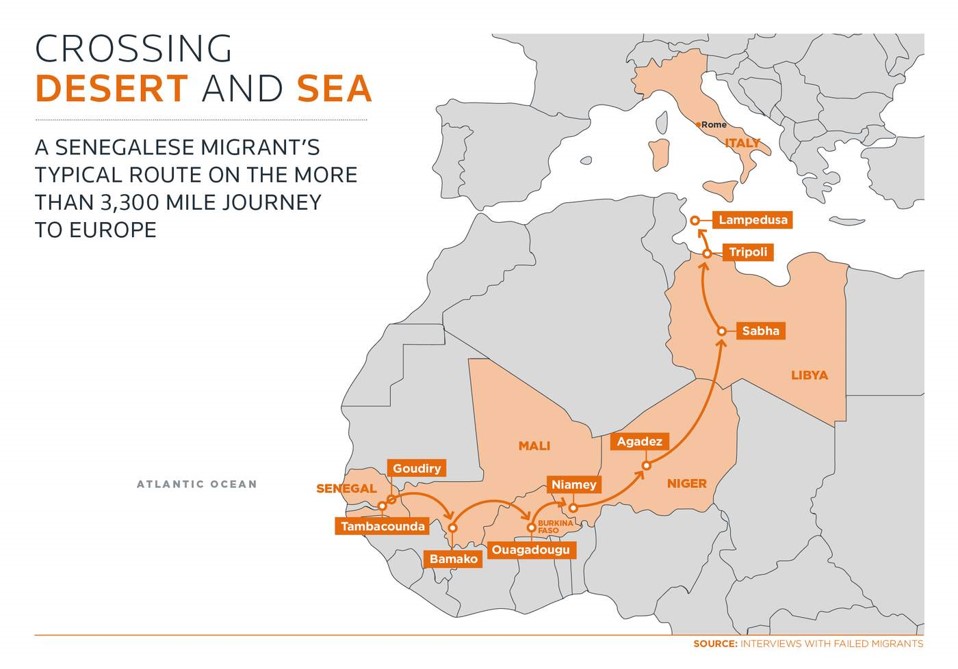 SO WHAT DO WE DO?

Volpato has some concrete suggestions. “First, we must reduce the intensity of fishing and massively increase the size of marine reserves. We have to adapt our consumption in accordance with the species which are locally and seasonally available. On the political level, we must implement policies that promote and regulate sustainable fishing, artisanal fishing, in order to help coastal communities. We can do this by buying fish with a short supply chain, thereby promoting social development and horizontal wealth distribution with our purchases. If we don’t buy the products of industrial fishing, then there’ll be more fish in the sea for small-scale fishers who depend on it.” The alternative doesn’t make sense, either economically or environmentally, as the millions of euros of profit generated by industrial fishing only enrich the tiny handful of people that control the industry.