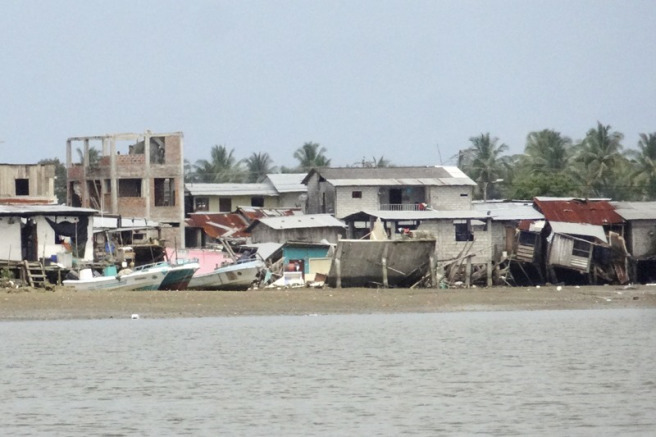 Saturday, April 16, Ecuador shook at a magnitude of 7.8, leaving, so far, more than 580 people dead, 8,000 injured and thousands of people, homeless, waterless, foodless, with insufficient supplies and government help reaching them too late or not at all.  More than 50 earthquakes have followed.

The earthquake’s epicenter was near Muisne, a little town of 6,000 inhabitants (25,000 in the larger canton), literally built on a mangrove, at the heart of the northern coastal state of Esmeraldas, where centuries ago slaves fled their forced destiny and established themselves in the wetlands that could hide them.

Today, the inhabitants of Muisne and all surrounding communities are still treated as if they were invisible despite efforts to reclaim their rights: their right to protect and use the mangrove for their subsistence (most are shellfish and crab harvesters, as well as fishermen), for example, or their right to have access to communal water. 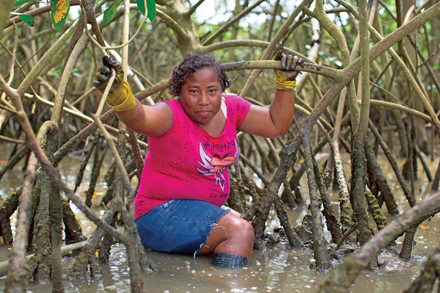 Hunting shellfish in the mangroves

With meager means and in the direst conditions, they have been organizing for decades now to reforest the mangrove, to oppose the destruction caused by shrimp farmers and industrial pollution and also to build community amenities such as a hostel that was transformed from a disused neighborhood school, a community refectory, and an ecotourism program, which hosted the Students of the Gastronomic Sciences in 2012.

All this work as been supported and facilitated by a local organization called C-Condem, whose leader, Lider Gongora, has been a tiresome advocate of the mangrove’s importance within the Slow Food network since his first participation in Terra Madre in 2012, who also organized Slow Fish South Pacific in 2014, which brought participants to these marginalized communities of Esmeraldas.

Today, Lider and his team are facing this new challenge for their community with renewed energy. They have no choice. The first priority is getting vital supplies to the most vulnerable communities: water, food, tents, candles, anti-mosquito products to prevent zika and dengue outbreaks, medicine and first aid kits. Further steps will concentrate on rebuilding the community’s homes. Slow Food in Ecuador is helping in this process, gathering the needed materials and directing volunteers, and is also partnering with FECAOL to build the basis of a future centered on food sovereignty. They are accomplishing this by launching a network of farmers markets in the area, which will not only supply food during the crisis but also strengthen the communities and long-lasting relationships with surrounding farmers.

You can donate here to help them cope with this terrible tragedy and build a better future.