Archive » Give Bees and other Pollinators a Fighting Chance: Protect the Forest!

As more and more forests around the world get decimated to plant monocrops, bees and other pollinators not only lose habitat but also enter a fight for survival against the increased use of pesticides and other agrichemicals, without the help of plant biodiversity that normally provides them with nutrients and healing compounds.

For centuries, bees and humans have had an interconnected relationship with the forest. Just like humans, bees forage the forest for blossoms full of nectar and set their homes in hollowed trees or piles of leaves. They support the system through pollination and food for other animals and humans.

In Ethiopia, for example, the forest around the Wenchi volcano provides a haven of wildflowers for a native species of bee that swarm during the rainy season, between June and September, feeding on a blanket of colors in full bloom. The main flowers identified are Egynia abyssinica (Kosso) and Erica arborea (Hasta). These and many other wildflowers give the bees nutritious pollen before migrating. The local farmers harvest the honey, with the help of smoke, which has been an important food staple, and a source of income.

Similarly, the Wichi community in Argentina has a strong connection with the stingless bee and the forest in which they both live. Wild honey is vital for the Wichi people, an ancestral tradition passed on through generations, directly linked to their culture, their knowledge, and their bond and ownership of the land. The honey has an unmistakable taste, closely linked to the gastronomic memory of the region due to the combination of flowers unique to this land and available for the bees to harvest and produce honey. The honey plays an important role in their food sovereignty, along with fish, animals, and fruits from the forest.

But these pieces of forests are shrinking daily. In the past 60 years, more than half of the tropical forests worldwide have been destroyed, mostly due to agricultural expansion and the use of toxic chemicals. During the opening of Terra Madre Larissa Bombardi, professor of geography at the University of Sao Paulo, explained, “Brazil consumes 20% of the world’s pesticides, making it the biggest consumer […] I’ve mapped the advance of soybean cultivation in Brazil from south to north, which has now reached the so-called “Arc of Deforestation” in Amazonia, where two elements are clearly connected, one is deforestation and the other is the use of pesticides. Soy in Brazil today exceeds the land area of Germany, and more than 90% of this soy is transgenic. Brazil exports most of its soy to the European Union and China.”

Bombardi emphasized that the Cerrado, the Brazilian savannah, has suffered the effects in terms of water and soil contamination, and reduction of biodiversity, a trend moving toward the Amazon as more land is cleared, in many cases illegally, as a study published in the journal Science and reported by Yale Environment 360 shows. “The scientists estimate that during the 2008-2018 study period, about 2 million tons of soy grown on illegally deforested land entered EU markets, with as much as 500,000 tons from the Amazon alone. Of the 4.1 million cattle traded to EU slaughterhouses, at least 500,000 came from illegally deforested properties. But when land used as overflow for grazing and food supplies was considered, scientists estimated that as much as 60 percent of traded cattle could be linked to illegal deforestation.”

However, deforestation and forest degradation are not only a problem affecting South America, Africa, or South East Asia, where the majority of EU produced pesticides are used in intensive agriculture, or due to logging, but also in Europe. A study found that the area of deforestation has risen dramatically across Europe within the past two decades, with a 69% increase between 2015 and 2018 compared to 2011 – 2015, with large forest losses on the Iberian Peninsula and in the Nordic and Baltic countries. In fact, 22 out of 26 EU countries have increased their deforestation rate, and the ones with large old-growth forests, including Sweden, Finland, Romania, and Poland, show some of the most dramatic rises. 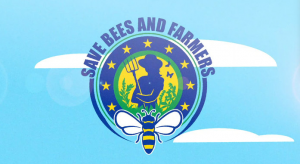 As we look for ways to #savebeesandfarmers, halt the climate crisis, and protect biodiversity, we must look at forest ecosystems and their value. Forests also play a significant role in providing clean air, regulating the water cycle, capturing CO2, and preventing climate change and soil erosion, and for many communities around the world, forests represent their livelihood and food sovereignty.

Have you signed the European Citizens Initiative “Save Bees and Farmers”? Your signature will help us make a difference and fight for a sustainable and bee-friendly agricultural system in Europe. Take action now!