Archive » From Chengdu to Turin: the great challenges of Slow Food

Commitment. Education. Protection. These are the three keywords of Slow Food. Who today, during Terra Madre Salone del Gusto, together with its International Executive Committee, present the current and future challenges, projects and many voices of the movement that has grown from Italy to 160 countries around the world.

The starting point is the Chengdu declaration approved in China at the Congress last October. In which, the first point defines the orientation of a movement that aims to change food policies. “It makes sense for Slow Food to exist,” says Paolo di Croce, Secretary-General, “until every person on the planet has access to good, clean, fair and healthy food. Slow Food will not stop fighting to guarantee it. How? The members of the Executive Committee explain. 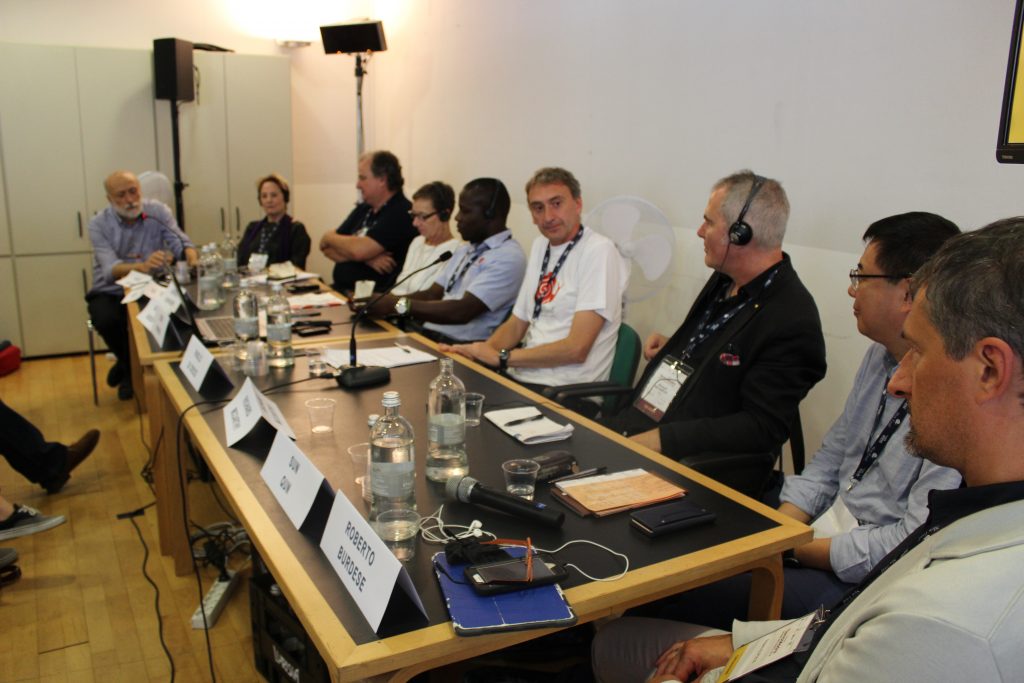 Events: why are they important?

“Slow Food events,” Roberto Burdese says, “are a tool for communicating projects, for telling the story of network activities and for putting the many actors of Slow Food and Terra Madre on stage. It is not only the producers but also cooks, young people who consider the future of food, educators, citizens who make responsible choices,  researchers and scholars who are working these days on the project of the widespread university. It is an incredible stage that allows us to tell the world what Slow Food is in the field.”

Africa: family farming as a response to global crises

From Slow Food events to Africa, the role of family farming is central. “Millions of people face the consequences of malnutrition,” says Ugandan leader Edie Mukibi. “Today, large estates have dramatically eliminated small farms, which can be the answer to dramatic phenomena such as climate change and the flight of young people from the countryside. The gardens in Africa are small – but large – community initiatives that respond to global phenomena such as urbanization and mass emigration.

From Africa to the United States through climate change, still today – despite the evidence – questioned. “I can say I am a climate migrant,” says Richard McCarthy, Executive Director of Slow Food USA. “In 2005, Hurricane Katrina destroyed my city and I had to leave. When such violent phenomena strike you closely you realize that they are not an abstract and distant phenomenon. So we began to understand that reality lies in everyday experience and that revolution lies in daily life. From this comes the #Foodforchange campaign, which allows us to communicate good practices and examples of resistance and allows us to make it clear that we can all take possession of our future. “All together”, Richard concludes, “we can change the course of the food system through our decisions”.

Europe still has a great influence on world balances and future policies. For this reason, Community Agricultural Policies (CAP) are of close concern to us. “Obviously, food policies must be followed year after year in each country,” began Ursula, president of Slow Food Germany. “Having an office in Brussels has certainly allowed Slow Food to have a say and to have a good relationship with institutions. At the moment, the strongest theme is the CAP, which requires about 35-40% of the European budget. These investments should be spent on ordinary people, on farmers, not on the food policies of multinationals or political decision makers. Food policies, for example, have links with migration and CAP but does not guarantee a food system that will lead to a better future. Slow Food in Europe must mobilize civil society to raise awareness and in this, the work of advocacy is fundamental as it is essential to arrive at a common food policy that meets economic, environmental and social needs.”

Latin America: the fight against GMOs

In Brazil, Uruguay, Paraguay, Argentina and everywhere in Latin America – the problem of GMOs is increasingly pressing. Denounces Georges Schnyder, president of Slow Food Brazil. “And it’s incredible,” he says, “if you think about how much biodiversity there is in our countries. For example, the Brazilian cerrado has an incredible wealth of biodiversity. Yet there is no mention of it. Why is it disappearing? Because it is disappearing in favor of soybean fields for cattle. Who benefits from this? Monsanto-Bayer. It’s simple and it’s very clear and nobody says anything. Now is the time to react and say enough. That is why we have decided to launch a campaign against pesticides against lobbies. We need to stay connected. There are many of them, but we are more.”

Rural reconstruction to get out of the conflict between city and country and between industry and agriculture is the watchword of Sun Qun (Vittorio), founder of Slow Food Great China. Slow Villages can be an answer to the crisis that this great world power is facing. “Finally, even the Chinese central government has understood that it is necessary to seek its own path for development that provides for an integration between the city and the countryside that combines nostalgia – for the return to the land – with technology, used by 60% of the Chinese people. Slow Food”, concludes Vittorio, “is a model laboratory of development for China and when China develops in a healthy way it is an example for the whole world”.

“Why not support farmers who care about the land instead of buying cheap food for school canteens? This is the question that opens the speech by Alice Waters, vice president of Slow Food and owner of Chez Panisse, a restaurant in Berkeley. There is a huge volume of food in the school system and often the food choices and money that goes into the wrong hands. “In addition, one in two children risks diabetes. We have therefore decided to make a commitment, namely to buy raw materials directly from local producers. Schools can thus become the economic driving force behind this initiative and also an immediate way of tackling climate change. I believe that this could be an idea to take everywhere, a real message that risks being subversive”

Local and international: the two souls of Slow Food

The sense of Terra Madre is that food can be a tool to bring about change when facing the enormous complexities of the food system. “Food can help change,” closes Carlo Petrini, president of Slow Food. “But it must be done according to the principles of reduction (for the western world) and convergence (for the south of the world) that should be taken into account by international politics.” Slow Food is committed to not bringing out exclusively national messages, which does not mean not having the local culture at heart. Ideas can start from small realities. If there is sharing, many of these ideas will come true.

And so Slow Food strengthens, forward all the way!