Archive » Food Must Be Fair – For Everyone Who Works With It

The Slow Food movement fights for a good, clean and fair food system—that’s our core message, the flag we’ve been flying for over 30 years. From the very beginning, with the protest against the opening of a McDonald’s in Rome in 1986, Slow Food has been associated with the anti-globalization movement, insofar as McDonald’s represents globalization (indeed, “McWorld” is a synonym for globalization). But what is that opposition based on? Is it simply the low quality of the food McDonald’s serves, or the severing of the link between food and territory? No. It’s much more than that.

The Slow Food manifesto states that “social justice should be pursued through the creation of conditions of labor respectful of man and his rights and capable of generating adequate rewards; through the practice of sympathy and solidarity”. Oftentimes, this is understood as referring to the people who grow our food, but it goes further. In restaurants like McDonald’s and countless thousands of others, the people who serve the food are kept at the breadline. In 2014, the Economic Policy Institute revealed that 40% of restaurant workers in the USA lived in poverty. So when Michael Pollan says “cheap food is an illusion”, he’s right. The real cost of the food is paid elsewhere, but not only by the environment which is destroyed in its production, not only by the inflated expenditure on health care which bad diets necessitate. It’s also paid for by the people working in the industry for little more than starvation wages.

The situation is more precarious than ever, as today, in Washington D.C., Donald Trump will be inaugurated as the 45th President of the United States. Trump has stated publicly on several occasions that a federal minimum wage needn’t exist, and that the individual states should be encouraged to “compete”, while on other occasions has argued for a federal minimum increase, from $7.25 to $10 an hour.

But the people want more than ten dollars. The Fight for 15 movement grew out of protests by McDonald’s workers in New York City against low pay in November 2012, and quickly spread to other fast food chains across the country. Widespread wage theft in the industry meant that in effect, a lot of workers were making less than the already-low minimum wage, and shifting the burden to the government and the taxpayer in the form of increased food stamps and other forms of federal assistance for the needy. Meanwhile, the CEO of McDonald’s took home almost $8 million in 2015, while Hollywood film The Founder casually glossed over the economic basis of the company’s success—cheap, low quality ingredients and underpaid staff—spinning it as a model of efficiency. 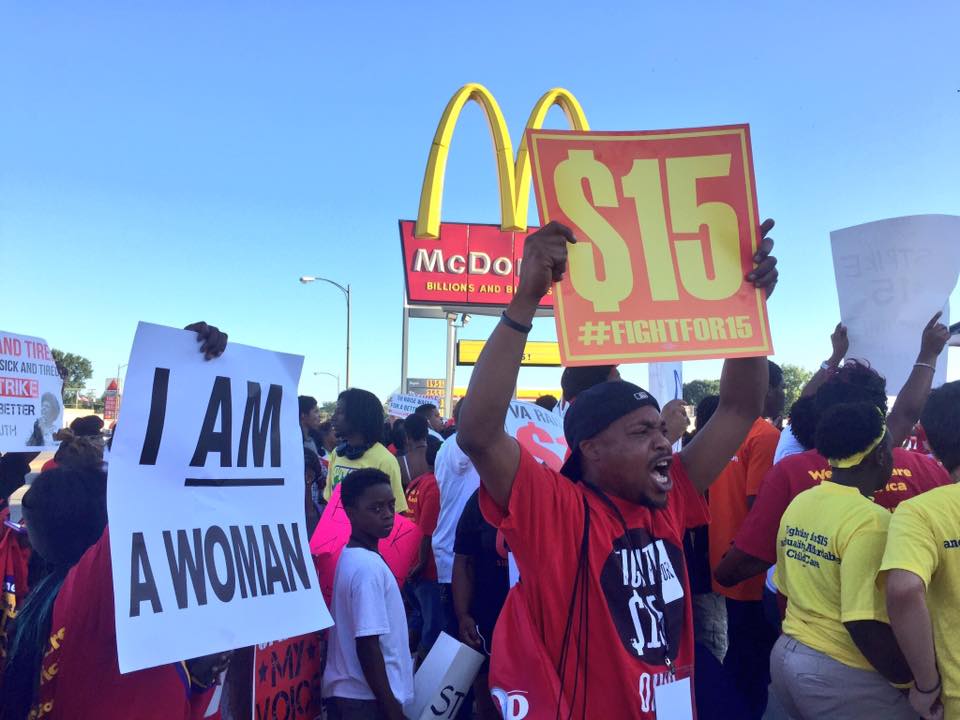 There have been important victories for the Fight for 15 movement, with raises being obtained for over 11 million workers in 2016, with the median income going up by over 5% as a result. But the battle is far from over, and the corporations have several tricks up their sleeves, with the former CEO of McDonald’s Ed Rensi publicly admitting that the Fight for 15 movement was pushing the company to automate jobs and going as far to say: “I told you so.” Shocking, of course, but to be expected from the representatives of an economic philosophy which cares little for our environment, for animal welfare, and indeed, for human beings, both as customers and as workers.

Brenda Ruiz, chair of Slow Food California’s Policy Committee and a chef, has been at the forefront of the fight for fair wages throughout the food system. A coalition which includes Slow Food California has recently won an increase in that state’s minimum wage to $15 an hour, after a four year campaign. “Together we defeated the Restaurant Association’s effort to carve out a ‘total compensation’ exception for tipped workers. Perhaps more significantly, in 2016 we helped pass a comprehensive overtime law for farm labor, again in California, requiring time-and-a-half pay for more than eight hours in a day or 40 hours in a week, with a longer phase-in period for small farmers. This will put farm labor on a par with other industries.” Federal law currently exempts agricultural employees from the overtime pay, but does not prevent individual states from implementing their own laws.

Slow Food opposition to the fast food industry, already evident in our very name, has never been stronger. As Brenda Ruiz sums it up: “A food system that relies on denying rights and fair wages to growers, processors, and servers cannot be good, clean, or fair.”