Archive » Food In The Grave

Folco Portinari Italy
A literary critic and food connoisseur, he contributed to a number of newspapers and periodicals. He was the author of the Slow Food Manifesto. 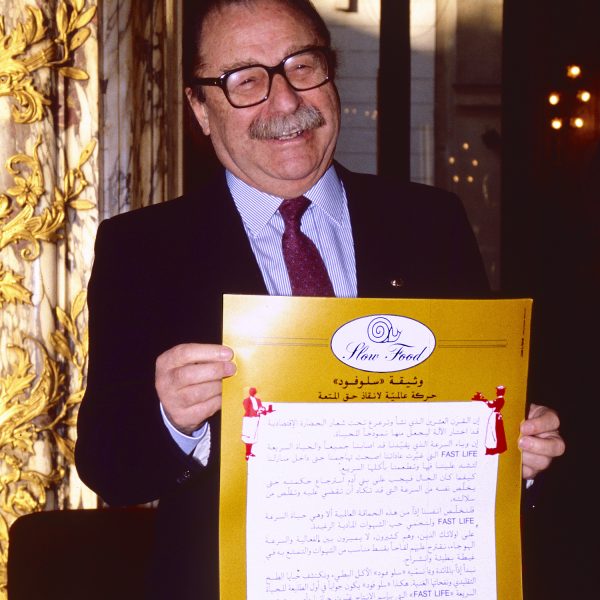 We must not forget that Gioachino Rossini was born in 1792, the year after Mozart’s death. This means that Rossini’s cultural roots lie in the 18th century, a time of contrasting theatrical styles. There was the revolutionary new development of Goldonian ‘realistic bourgeois’ theater which overlapped the final surviving elements of Commedia dell’Arte with its stock characters and clownish masks from street theater. This period, bridging the second half of the 18th century and the beginning of the 19th saw a transformation in the forms (and formulas) of culture and theater, reflecting those in wider society. It was a time of contradictions, contrasts and conflicts, which became more pronounced as the upheavals to the economic and political order progressed. In Europe a new class gained power and became culturally dominant, with a whole array of consequences. Then there were new inventions. Roughly speaking, the new reality stood opposed to the established codification of stock characters, with their caricatures and commonplace representations. Goldoni’s two works La Locandiera (The Mistress of the Inn) and Arlecchino servitore di due padroni (Harlequin, Servant of Two Masters) illustrate this contrast. In a musical context, it is like comparing serious opera and comic opera.

The gastronomic legacy of Commedia dell’Arte reflects the only authentic gastronomic tradition of ordinary people — hunger. The hunger of peasant life portrayed by Arlecchino and Brighella, hunger in Naples seen in Pulcinella’s perpetual frantic search for food and, if we move to a particular geographic location such as the area around Bergamo and Venice, a special type of food like polenta. But the theater of masks was not accepted, apart from occasional exceptions, in musical opera. It is also very rare to find people eating on stage, which I imagine is due to complications with sets. At least it can be talked about: there is the frequently cited example of Mozart’s Don Giovanni. It is common to drink when there are celebrations (performers can drink and sing, but it is more difficult to chew and sing). Or the stage can be set at the beginning, as in Verdi’s Falstaff: ‘Inside the Osteria della Giarrettiera. A table. A large chair. A bench. On the table are the remains of a meal, many bottles and a glass’. However Rossini is an odd case, since a significant discrepancy is apparent. He was well known for his culinary competence and passion, shown not only in his creation of recipes which still bear his name but also in pieces of chamber music dedicated to food. Yet practically nothing appears in his operas, whether comic operas or dramatic operas. There are just a few exceptions where food appears tangentially through allusion or assonance.

Allusions
The first example of gastronomic allusion is fairly spectacular in its dramatic context and appears in the form of an ambiguous play on words. It involves the strategic and clever use of a word by Isabella to gain freedom from the Bey Mustafà, who is holding her prisoner, in L’Italiana in Algeri (The Italian Girl in Algiers), libretto by Angelo Anelli. Isabella tricks Mustafà into accepting membership of the fictitious order of Pappataci (with the various meanings of ‘sandfly’, ‘eat and keep quiet’, and ‘silent sufferer, i.e. a man who gives his wife free rein’): ‘But pray tell me: / What must a Pappataci do?  – Amid love and beauty, / Amid banter and caresses, / He must sleep, eat and drink, / Drink, sleep and eat’ and the Bey is eventually enticed ‘To eat and to enjoy, / to allow and do and talk / I here do swear and entreat you, Pappataci Mustafà’ (in this context I remember a joke current during my childhood: ‘Dad, what is fascism?’ ‘Food and shut up’, which exactly corresponds to Isabella’s order: ‘Here you eat, drink and keep quiet’). There are similar gastronomic references, though even more fleeting, in Barbiere di Siviglia (Barber of Seville). In an argumentative aria delivered by Conte d’Almaviva in the second act, scene four, when his tasks include a ‘purge for lawyer Bernardone / who yesterday fell ill with indigestion’, or in Don Bartolo’s lament that they have broken ‘six plates, eight glasses, a bowl’. It doesn’t amount to much and is fairly marginal for someone who gave his name to Rossini tournedos.

In Cenerentola (Cinderella), there is mention of a celebratory feast planned by the Magnificos: ‘Let’s go / arrange the meal: / there shall be / a torrent of wine to drink./ Wonderful bounty / of dishes… / – Let’s go / – …sixteen / to whoever drinks / most Malaga’. But it ends there without further practical follow up, a narrative collapse. It’s a similar story in the Viaggio a Reims (Journey to Reims), where there is a program proposed by a group of noblemen to the Albergo del Giglio d’oro at the spa of Plombières, to celebrate the accession to the throne of King Charles X. The Contessa di Folleville begins: ‘Paris is my home: / There I offer lodging and food. / It is what is needed’; Don Profondo accepts the idea: ‘Order a splendid feast for this evening. / Let all be invited’; and is taken up by Madama Cortese: ‘Oh! It’s Sunday, / Everyone is most welcome to come’, and with mouths watering we hear Don Profondo pronounce: ‘A magnificent meal’. Everything is a great success but we are left wondering what was on the menu. We can find an intriguing stage direction in Donna del lago (Lady of the Lake), the musical comedy which so appealed to Giacomo Leopardi. It is curious but realistic if we remember that the source is Walter Scott and the action is set in a medieval Scotland: ‘Elena’s companions pour beer into a cup, like a small bowl, and offer it to her’. I do not know if we can find another example of beer in the history of Italian opera.

At the table
I remarked at the beginning of this article that in his lyric operas Rossini avoids food or only introduces it tangentially. Prepared food is not presented, just various elements with a functional connection to eating. It can be presumed that the ‘fisherman in a boat on the river’, who opens Guglielmo Tell (William Tell), will obtain fish just like the hunters, preceded by a horn sounding, and they will get the game for the forthcoming wedding feast. But neither fish nor fowl is actually seen. A final example will suffice. It stands at the center of the plot of the Gazza ladra (Thieving Magpie), based on a text by Giovanni Gherardini. The entire action develops around the disappearance of two pieces of silver cutlery (‘Today a spoon is missing, yesterday / it was a fork, Ah that is too much!’, exclaims the lady of the house). Ninetta, a rich farmer’s servant, is charged with theft and sentenced to death. It is predictable from the title that everything will end well and the true thief is actually the magpie. But that is not all: the introductory scene is of a household celebration (‘Various villagers: some families bearing the things needed to set a table’) with Lucia urging: ‘Get a move on, off you go; / set the table / over there under the pergola / which is inviting us to eat’ and the husband who proclaims, ‘He [the son returned from the war] brings high spirits, / he brings the sparkling nectar / he has in his veins / the vigor, the health’, ‘leaving the orchard with some pears he places on the table’, while Ninetta arrives with strawberries: ‘A whole basket I have filled to the brim. There they are’. Then everyone sits down at the table, in an atmosphere of bucolic idyll. And for once there is then a specific mention of food, even if still generic: the stage direction says that Lucia ‘serves the soup’. So everyone is happy, though the uncle is ‘still afflicted by his gout’. The drama of the cutlery finishes in a happy ending with the magpie found guilty. But I have a nagging doubt: what sort of soup was it? Our great gourmet does not tell us, just as he never reveals his tastes and culinary secrets — at least in his operas.