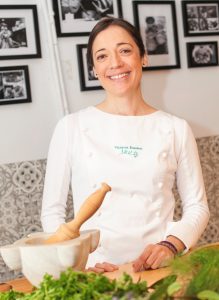 Chef and cooking instructor Vanesa Bustos has been a member of the Slow Food Palancia-Mijares Convivium since 2009. She recently collaborated on the creation of the La Terreta Ibérica community of cooks within the Cooks’ Alliance. Here she shares with us a fascinating recipe, typical of her home region, the Comunidad Valenciana: fideuá con gatet, also known as fideuá de pintarroja.

Fideuá is one of the most representative dishes of Valencian cuisine, a very Mediterranean dish made in a similar way to paella. Invented in Gandía, the story goes that some time early in the 20th century, the cook on a fishing boat had forgotten the rice he had been planning to use to make a seafood paella, and used noodles instead. The dish is traditionally prepared with fish and other seafood.

Unlike other pasta dishes, here the noodles are cooked in a fish broth, infusing them with lots of flavor. The fideuá is cooked in a paella pan, which has two handles and a large, flat surface which can vary in size. The noodles (or rice for a paella) must be able to be spread out in a thin layer.

The classic fideuá recipe uses seafood such as monkfish, prawns and squid, all very common species that can be easily found in most fishmongers. However, other lesser-known but equally delicious fish can also be used, providing more diversity in flavor. These fish with a lower commercial value can be harder to find in fishmongers, so it’s important to learn more about them to help use these species that are often discarded. This recipe calls for lesser spotted dogfish, gatet or pintarroja in Spanish, also known as rock salmon, rough-hound or sandy dogfish.

A well-cooked sofrito base and a good broth are key to a tasty fideuá.

– Heat the olive oil in a paella pan and sauté the onion with a pinch of salt until soft.

– Add the garlic, then the paprika, saffron and tomatoes. Cook over low heat until the liquid has reduced and the sauce has concentrated.

– Add the fish and a pinch of salt and cook for a few minutes.

– Add the noodles and stir until completely covered in the sauce.

– Pour over the hot fish broth and cook for around 10 minutes, initially over high heat then continuing over low heat, until the noodles have absorbed all of the broth and the sauce liquid has evaporated. Halfway through cooking, taste and adjust the salt. Leave to sit for a few minutes before serving.

The following Ark of Taste ingredients are used in the recipe:

The quality of this mountain saffron comes from extreme temperatures and the artisanal production process typical of the region where it is cultivated, in the pre-Pyrenees. It is used not just for its color but also its fragrance and flavor.