Archive » Farming is not Poverty, it is Fundamental for our Future

The topic of the 42nd session of IFAD’s Governing Council, was rural innovation and entrepreneurship. On this, Dalí Nolasco Cruz, member of Slow Food Mexico and Advisory Board member of the Indigenous Terra Madre (ITM) network was invited to participate and she pointed out how “good, clean and fair” indigenous farmers are innovating to protect their lands and territories and to adapt to climate change: “the belief is that being a farmer is synonymous with poverty but it is not. We are now transforming that misconception because those people are playing an essential role in the future of humanity”.

Indigenous leaders, such as Dalí, are able to participate at the IFAD governing Council, and address Ministries of Agriculture and the Pope, thanks to a mechanism created by IFAD (International Fund for Agricultural Development) in which indigenous leaders meet at the “Global Meeting of the Indigenous People’s Forum”, in Rome, debate and then propose global recommendations to IFAD and governments to take into account the holistic vision of Indigenous peoples.

Shortly earlier, on Wednesday, the Fourth Global Meeting of the Indigenous People’s Forum, organized by IFAD in Rome, closed. This edition focused on the promotion of indigenous peoples’ (IPs) knowledge and innovation for climate resilience and sustainable development, providing an opportunity for indigenous peoples and IFAD staff to analyze and learn from previous experiences, and further strengthen their collaboration for rural transformation.

Participants and members of the Forum’s Steering Committee highlighted IFAD’s commitment to supporting indigenous peoples. Victoria Tauli-Corpuz, UN Special Rapporteur on the Rights of Indigenous Peoples, agreed with this analysis but she remarked that the road ahead is uphill: democratic spaces are shrinking in several countries, hate speech and campaigns on social media against indigenous peoples and environment defenders (who are labelled as “guerrillas” or even “terrorists”) are increasing,  and murder of indigenous activists (207 in 2017, predominantly in Latin America). A zero-tolerance approach must be adopted around the world regarding the killings and violence. Globally, we need to defend these people who are protecting the global biodiversity and our world.

There are bright notes to celebrate though: Victoria reported that IPs generally live better where they have autonomous governments (self-declared or recognized), which lead to successfully defending their territories from corporations (mining, oil, dams etc), higher levels of education, access to food, sustainable use of ecosystems and protecting biodiversity, etc. In some cases, indigenous “guards” have kept drug cartels away from their territories and from recruiting their youth.

“Nature is not a force to resist, but something to adapt to, drawing on our capacity for resilience.” The speeches of members of the IPs Forum Steering Committee and UN Permanent Forum on Indigenous Issues underlined the connections between land, ecosystem management, the effects of climate change, and the capacity for resilience of Indigenous peoples as well as spirituality.

Dalí Nolasco Cruz, a Nahua woman from Mexico, member of the Indigenous Terra Madre Advisory Board for Latin America and the Caribbean, attended the Forum and contributed by sharing the experiences of the Slow Food and ITM networks on protecting and promoting indigenous food systems.  “If we really want to work on the long-term impact of IFAD projects, it is really important to target youth and women. Projects should be complemented with training and follow-up components on indigenous peoples’ rights for youth and women.”  she said.

Slow Food’s representative, Luis Francisco Prieto described how IFAD and Slow Food are working together to empower indigenous youth and their communities to defend and promote their food heritage. “When we launch the Slow Food Presidia projects, youth and their communities meet to decide on the activities and on the budget to allocated to them” Francisco said, continuing: “The innovation brought by Slow Food is the double approach, on one hand, improving the whole value-chain (from the field to the consumers, to influence their daily behaviors and food choices), and on the other hand, to connect communities with the wider Slow Food network present at the local and global level. In fact, all the knowledge that is collected at the grassroots level is shared within the network, often during events. And participating in events has a positive impact on self-esteem and identity: youth that attend international meetings are motivated to work at the community level, when they return home.” Francisco concluded. 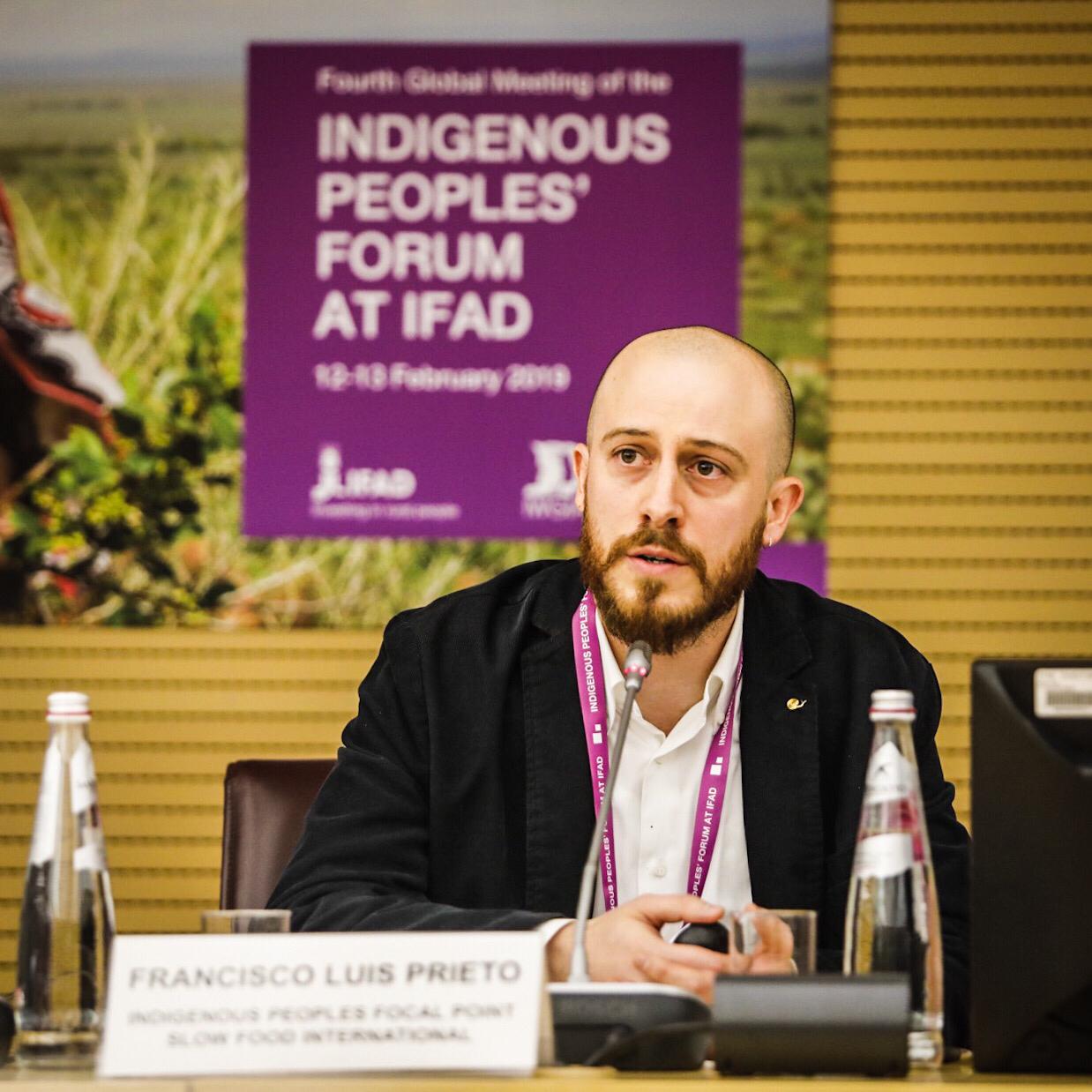 Participants at the official welcoming were introduced to the Slow Food philosophy: upon entering IFAD, they were greeted by panels explaining the connections between food, nutrition, and climate change. Indeed, the Slow food campaign on Nutrition and climate change was set to raise awareness on how Indigenous and biodiverse food systems can contribute to a healthy lifestyle and environment. Furthermore, in their welcome bags, participants received a “chocolate bar”, made with the highly nutritious carob flour of the “Gran Chaco Wild Fruits Presidia”.

Among the major outputs of the Fourth Global Meeting were the exchange of knowledge on good practices and the opportunity of providing regional action plans for 2019. In late 2018, four regional consultation workshops were held across the world: for Africa (Nairobi, Kenya), Asia (Bogor, Indonesia), Latin America and the Caribbean (Panama, Republic of Panama), and the Pacific (Nadi, Fiji) in preparation for the meeting. From their different perspectives, participants identified a series of issues and recommendations to be discussed in Rome, among them the need to establish partnerships to access the Green Climate Fund to support their community-based climate change mitigation and adaptation actions and initiatives; and the need to work on identifying strategic elements of biodiversity management in the territories as the foundation of climate resilience.

This is a significant point of contact with Slow Food. IFAD and Slow Food share a vision of supporting small-scale, diversified production and consumption mechanisms that focus on improving the marketing of local products. Such mechanisms reflect principles of quality, biodiversity and environmental conservation, and guarantee the fair pricing of agricultural products that adequately compensates the work of smallholder families. Slow Food and IFAD have worked from the beginning of the partnership to build a shared discussion space for indigenous peoples within the greater Terra Madre network.

First established in 2011, the forum is a permanent process of consultation and dialogue between representatives from indigenous peoples’ institutions and organizations, IFAD and governments. The importance of engaging with indigenous peoples in climate change policies and action was recognized by the Conference of Parties (COP) to the United Nations Framework Convention on Climate Change in 2015 in Paris. The launch of the Local Communities and Indigenous Peoples Platform established by COP 23 in 2017, and the adoption by the Green Climate Fund of an Indigenous Peoples’ Policy in 2018, are two major advances in the participation of indigenous peoples in decision-making related to climate action and for the protection of their rights. 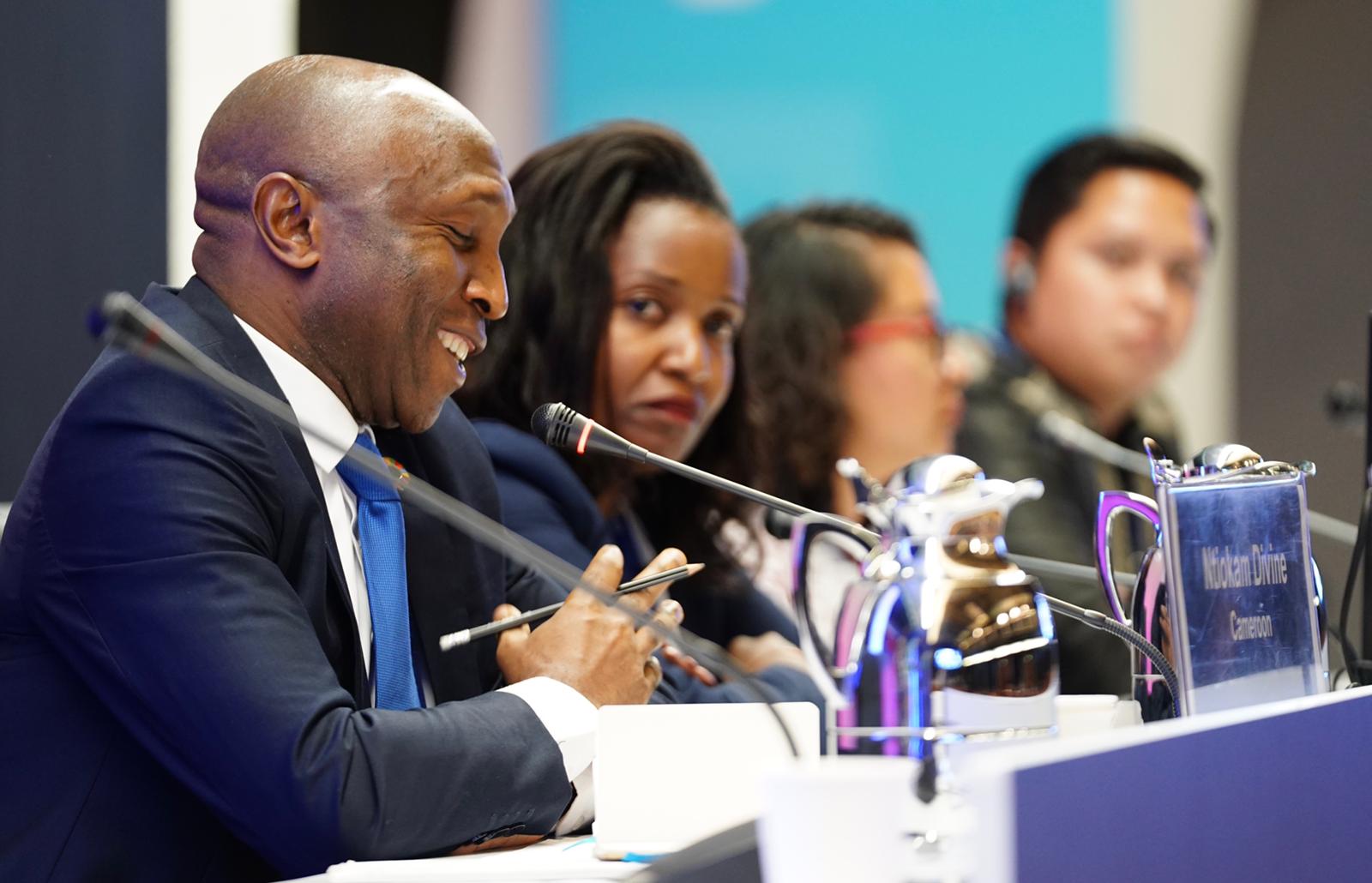