Archive » Europe and the Future of Agriculture

Entering into farming is becoming increasingly difficult; young farmers in Europe are facing many challenges. These include exaggerated prices for farms and farmland, rising competition in the global marketplace and increasing ecological and safety obligations resulting in additional restructuring costs. In addition, existing subsidy programs for young farmers at the national and EU level remain largely ineffective.

How do you become a farmer?

Several challenges stem from outside the farming world. With young urban dwellers becoming increasingly removed from agriculture, they are losing touch with the seasonality of agricultural production, its underlying processes and the producers themselves. Romanticized advertising images and increasing ecological demands are further at odds with the actual conditions of agricultural production and falling prices at the consumer end. The image of farming in the media and the public eye also remains far from positive, with the gap between the media portrayal and the reality of farming now bigger than ever.

EU agricultural policies are highly complex and often not completely transparent. Many European citizens do not engage with them. This is despite the fact that a significant portion of EU tax money is allocated to agricultural subsidies: almost 40% of the total EU budget, approximately €50 billion a year. The EU Common Agricultural Policy (CAP) influences European landscapes, the environment and living conditions of farmers, but also the food we have on our plates. The CAP is therefore not only relevant for farmers and policy makers, but for every European citizen.

But how will we guarantee the future of our food when fewer and fewer young Europeans are taking up the farming profession? How can we ensure diverse and regional food production that respects resources such as soil and water – also known as sustainable farming – when the young generation is losing interest in and knowledge about farming? 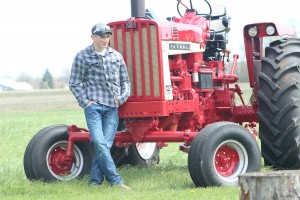 The potential of a video blog

The declining number of young Europeans entering into farming has long been a central challenge with regard to securing sustainable agriculture. For this reason, the Slow Food Youth Network in Germany is collaborating with several young farmers’ organizations in the country to develop a campaign to highlight dwindling numbers and to kick-start the public debate regarding possible solutions.

The campaign comprises four main activities. The kick-off event was a revolving table discussion held in Berlin in January during the annual demonstration for good food and good farming, known as “Wir haben es satt!” (We are fed up). Young farmers, food producers and consumers came together to investigate and discuss the difficulties young people face in beginning a career in farming, as well as the root causes for this. The discussion results form the basis of subsequent activities, setting the themes for an information campaign known as “Du und Dein Bauer!“ (You and your farmer). This part of the campaign aims to raise awareness of the some of the challenges through posters, postcards and a video blog. The video blog intends to bring the public debate about farming to the young, web-savvy generation. It includes interviews with farmers, experts and Slow Food activists, but also short interviews with the general public. The videos will also be used to trigger discussion on social media. A final cut, bringing together the impressions and background information, will then be distributed to policy makers to generate further dialogue. Throughout the year, regional round table discussions will bring together policy makers with young producers and co-producers to address regionally specific issues. They will also debate how best to locally promote sustainable agriculture and provide a future for young people in farming. The events provide an opportunity to promote interaction and dialogue on local and regional levels for sustained local collaboration. Finally, the results of the campaign will be collected and made available in print and online.

The Slow Food Youth Network (SFYN) is an international network of young people who bring about changes in the field of food production and consumption. It was founded by a number of enthusiastic and motivated young people with a passion for good, clean and fair food, and with an interest in sustainability issues.

Find out more about Slow Food’s work in Europe at www.slowfood.com/sloweurope