Slow Food welcomes the European Parliament’s vote in favour of the EU Farm to Fork Strategy, in spite of repeted corporate attempts to water it down over the past months. By doing so, the Parliament shows strong commitment to the transition to sustainable food systems. 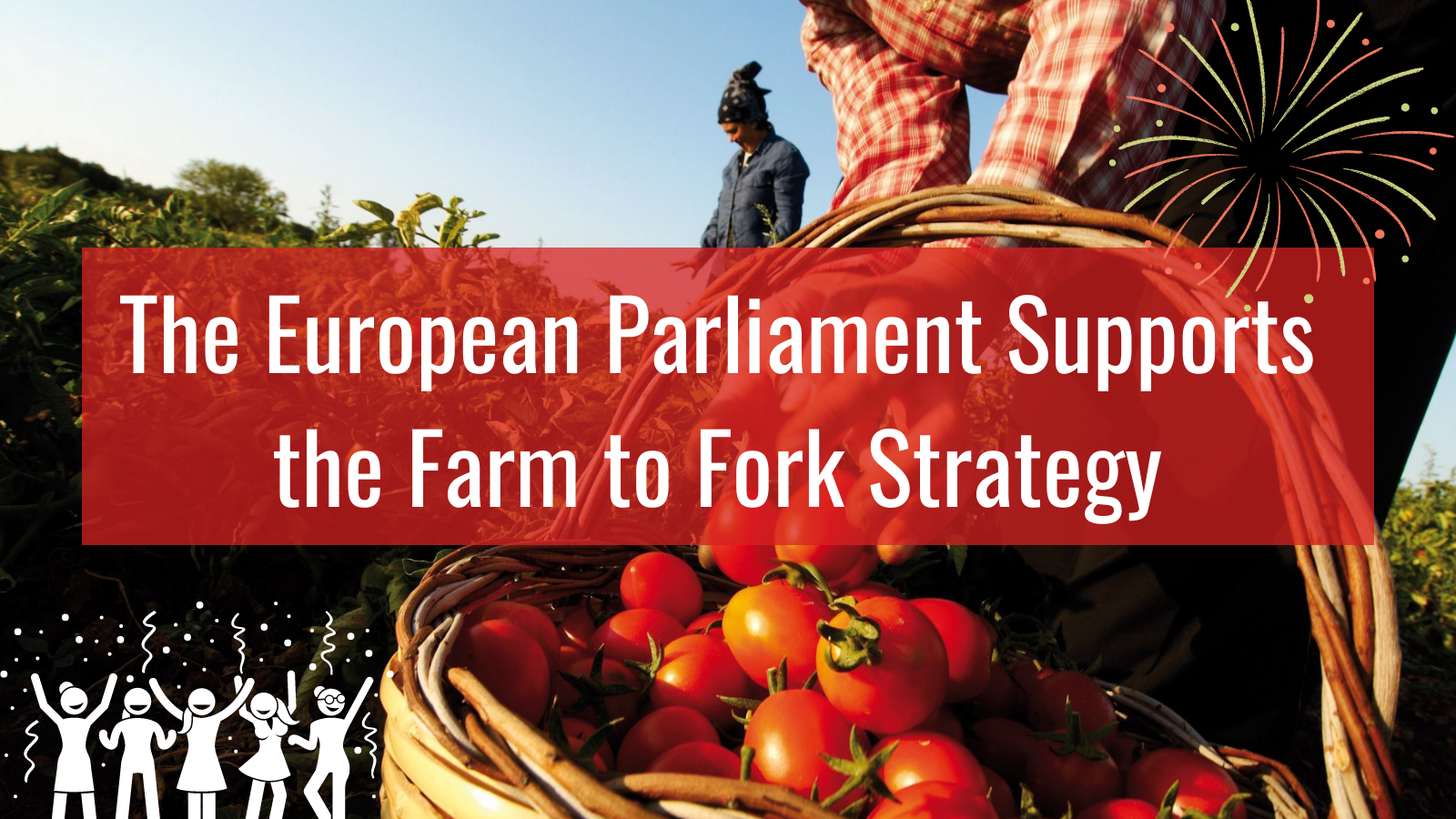 On October 19, the European Parliament adopted its Opinion report on the EU Farm to Fork Strategy, with a wide majority of 452 of the 699 Members of Parliament voting in favour of the report (170 against, 76 abstained). Despite not having any legislative value, the vote is setting the future of the Farm to Fork Strategy and of the European food and farming system onto the right course.

“We applaud the Parliament for deciding to listen to science and to European citizens, and not to corporate interests. Our European decision-makers are showing strong commitment to transitioning to fair and sustainable food systems that protect the planet and people. Given the urgency for action, it is now time to move forward on concrete legislative action”, commented Madeleine Coste, Slow Food Europe policy officer. “The recognition of the need to significantly improve food environments by the European Parliament is an important step in the right direction – it is high time that we stop blaming consumers for making individual unhealthy and unsustainable food choices, and instead take the needed policy actions to render these choices the most accessible, affordable, and pleasurable.”

Importantly, Members of the European Parliament rejected the proposals made by agribusiness to weaken this important Strategy. Indeed, among others, the Parliament voted in favour of:

“This is exactly what Slow Food is asking for, which unfortunately was not taken into account in the recent CAP negotiations”, continues Madeleine. “We hope this vote will finally mark the path and represent a wind of change in the CAP discussion currently happening at national levels”.

A Growing Demand for Good, Clean and Fair Food

The vote has come amid great pressure from stakeholders to water down the report, and the coordinated efforts which we strongly condemned, of some industrial agri-food lobbies to discredit, delay, and weaken the Farm to Fork Strategy. A strong reduction in the use and risk of pesticides, which the European Citizens Initiative “Save bees and farmers” has successfully mobilized on, were the subject of particularly intensive lobby efforts. It seems that (a close majority of) Members of Parliament took note of citizens’ calls for a greener and fairer agriculture, and voted in favor of a binding 50% target on the reduction of the use and risk of pesticides by 2030.

European Citizens are increasingly mobilising for good, clean and fair food. Over 1 million EU citizens have expressed their support for the European Citizens Initiative “Save Bees and Farmers” which closed only weeks ago, calling for the phase-out of the use of synthetic pesticides and for increased support for farmers to transition towards agroecology. One year ago, another 1.4 million citizens called for high welfare standards in animal farming in the “End the Cage Age” European Citizens Initiative. European and national policy makers have heard their calls, and must now swiftly move ahead with bring the EU Farm to Fork Strategy to life.

Earlier this month, members of the EU Food Policy Coalition made a call to action to the EU to drive the creation of “enabling food environments” that make the healthy and sustainable food choices the default and most desirable ones. This entails shifting away from a long-lasting narrative focused on promoting “responsible consumer choices” and towards recognising the great responsibility of food processors, retailers, and food service companies in shaping the very food environments which influence consumers’ choices. 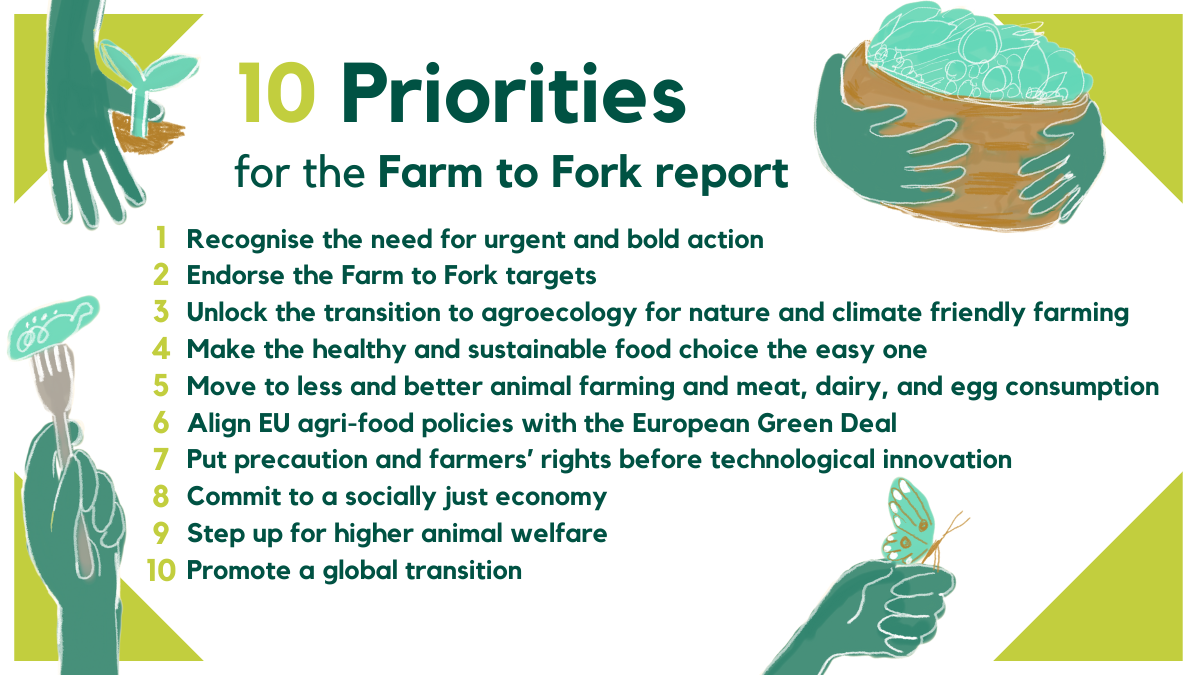 In April 2021, Slow Food, along with 24 organisations from the EU Food Policy Coalition, defined 10 priorities for the Parliament’s report on the Farm to Fork Strategy, which include endorsing the Farm to Fork targets, recognising the need to improve food environments that help citizens to make healthy, ethical and sustainable food choices, and adopting a precaution-first approach to innovation and focus on holistic solutions, such as agroecology.

Slow Food is pleased to read that the Parliament report goes in the direction of these 10 priorities, and sends a strong signal that it is committed to protecting the environment through developing agroecological practises throughout the EU, supporting small-scale food producers who are the guardians of biodiversity, and meeting European citizens’ expectations for better access to healthy and sustainable food.

Now that this vote has taken place, the European Commission is planning a number of legislative proposals under the Farm to Fork Strategy. We will keep you posted on further developments!