In the night of the 9th of May to the 10th of May, Slow Food Youth Network Netherlands (SFYN Netherlands) provided the sidewalk of 50 different supermarkets throughout the country with the slogan #votewyourwfork. The aim of the campaign is to make consumers aware of their right to vote, as well as to encourage them to vote for a candidate who is committed to a good, clean, fair and more sustainable European food system and agricultural policies.

From Amsterdam to Eindhoven and from The Hague to Deventer, groups of youth – from every corner of the country – went out with a stencil, green soap, and buckets of water to make their statements clear. All in all, a variety of 50 supermarkets has been provided with #votewithyourfork, including the most well-known supermarkets such as Albert Heijn, Jumbo, Lidl, Aldi, Nettorama, Plus, and Spar. This number will continue to grow until the elections on May the 23rd, alerting thousands of consumers to their voting rights every day. The ‘reverse graffiti’ – as this form of outdoor advertising is called – is environment-friendly because only water and organic green soap are used. 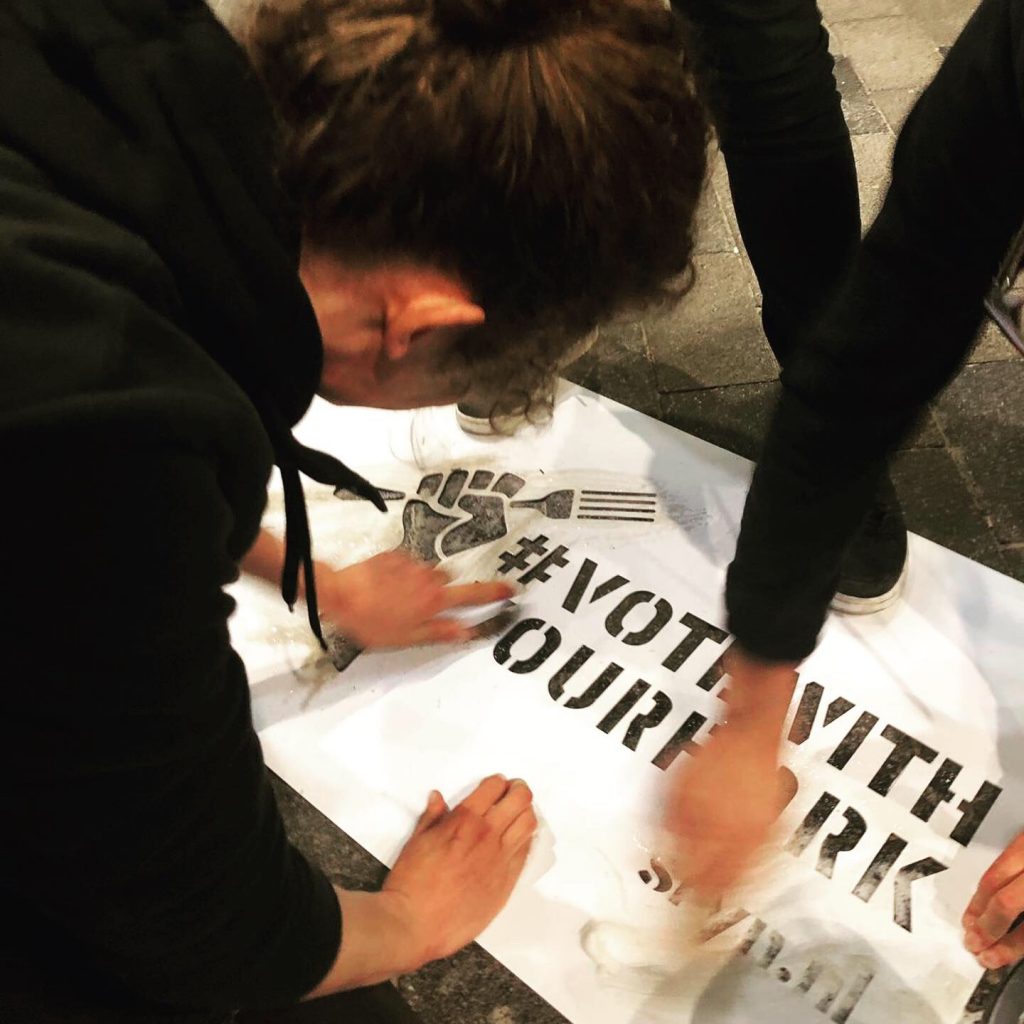 Food and politics are two closely related themes. Voting at the European elections can indirectly influence the food on your plate. Moreover, citizens now have more power in European decision-making than ever. An example of this is the Common Agricultural Policy (CAP) and the ban on single-use plastics, that was decided upon earlier this year.

“With this action, we ask consumers to make conscious food choices, and simultaneously, we ask them to make conscious political choices. We urge them to actually think about the topics within and outside their expertise, and encourage them to look beyond the polarizing debates,” says Jorrit Kiewik, director of SFYN Netherlands.

The Netherlands and the European food and agricultural system
The Netherlands is the second largest exporter of agricultural and horticultural products in the world. More than three-quarters of these exports remain within the European Union, yet the chemical pesticides that come with it have a considerable negative impact on biodiversity. Besides that, livestock farming is also far-reaching and intensified, which entails risks for people, animals, and the environment. Moreover, climate change is the greatest challenge of our time and it is becoming increasingly financially insecure for young farmers to run their businesses. All of these problems are related to our food. The way we handle food is untenable. It is time for a change in the current food and agricultural system, both within and outside the Netherlands and the EU.

Action with a border-crossing message
Millions of people, all over the world, realize that structural changes are needed to secure our agricultural and food system. An increasing amount of farmers and market gardeners opt for fair and sustainable production methods. Citizens set up organic vegetable gardens and local food networks. Politicians and civil society organizations are committed to fairer trade, investment, and competition policies. And academics share their knowledge for better food production and consumption. Yet, also voting during the European elections plays a crucial role in steering towards a different and better food policy. SFYN Netherlands is convinced that every single vote for a sustainable-oriented candidate contributes to a better and more sustainable European food policy – both within and outside the Netherlands.

The action of SFYN Netherlands is part of an international campaign in which young people from the Slow Food Youth Network invite consumers from all over Europe to vote for a party or candidate that deals with agriculture, food and the climate.